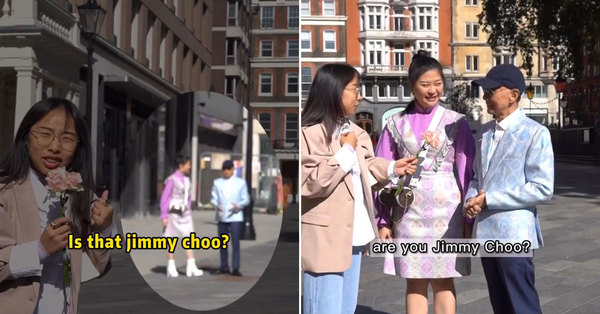 Malaysian fashion designer Datuk Jimmy Choo has gone viral in a video promoting Malaysian songket while he was being interviewed on the streets of London, UK

In the one-minute video posted by @worldmicrophoneldn on Instagram, Choo can be seen walking in front of his fashion school, JCA London Fashion Academy, at Hanover Square, accompanied by his mentee, Peony Sin.

“Good morning. Yeah, I am Jimmy Choo,” greets the revered designer when he sees passers-by waving to him, saying, “They recognise Jimmy Choo. (They are) wearing my shoes.”

Choo introduces his blazer jacket by highlighting the material that it is made by: songket.

“(Songket) is the most treasured fabric in Malaysia. (It’s) sewn by hands with gold and silver threads.”

“The jacket was designed for me by my favourite student,” he reveals, referring to Sin.

Sin then elaborates the idea behind Choo’s jacket and her cheongsam from her brand, Rafflesia, explaining that the unique fabric is often used in occasions such as weddings and traditional events

“It is a modern desgin, which I incorporate elements of Chinese cheongsam to showcase our Malaysian diverse culture,” she says.

Choo adds that their clothes are a mix of Chinese and Western cultures, fused together with the use of songket. He believes that with Sin’s design, they can introduce this Malaysian fabric to the world.

“I really respect my parents’ origins. We are still Chinese after all. I am Malaysian Chinese,” says the 73-year-old, adding he enjoys all Chinese, Cantonese, and Malaysian food in London.

In a separate video, Choo reminisces about the time when he designed heels for the late Prince Diana over two decades ago

Choo describes her as a gentle and kind princess who supported designers in London.

The interviewer, speaking in Mandarin, then points out that Princess Kate is fond of Jimmy Choo heels, too, to which Choo replies that he met her when she visited Malaysia.

After some banter with the interviewer, Choo shares how he made it big as a fashion designer, whose coveted shoes are known throughout the world.

After he completed his fashion studies in London, he says he opened up a workshop in the capital city in 1986.

“Then, I was approached by many designers at London Fashion Week. They asked me to make shoes for them,” he shares.

“How did I make my Jimmy Choo brand known to others? (I realised) my shoes had to have unique designs that nobody had ever seen.”

“One day, then Vogue editor Kate Phelan approached me and told me that she wanted to feature my shoes (in the magazine).”

“Now that I have mentioned it, Vogue’s office is located opposite (my fashion school).”

“(Phelan) published eight pages of Vogue editorials for me. Now, I have a school opposite Vogue. This is fate. This is destiny.”

Below is the video of @worldmicrophoneldn interviewing Choo:

In 2019, clothing brand Bartek blew up for selling songket and batik boxer briefs: