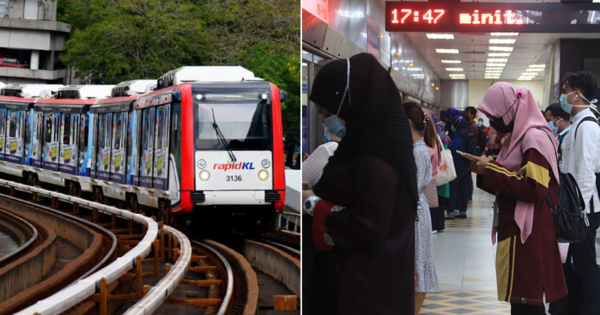 Earlier today, 9 November, it was officially announced by Rapid KL that 16 stations on the Kelana Jaya LRT line will be shut down for one week

While instances of inactivity or default in function related to LRT lines in Malaysia have come up ever so often, the temporary halt of 16 stations has left hundreds of Malaysians within the Klang Valley stranded.

Although numerous Malaysians have stepped up to the plate to help individuals in need who use the LRT to get to work, school, and university, among other places, the issue remains at large for most locals.

The inconvenience has not gone unheard, with many Malaysians taking to social media to express their frustration over the breakdown

“There’s no working LRT in the heart of KL,” said one user. “Not everyone [can afford] a car, [some] solely depend on public transport to go to work. Imagine the chaos!”

Another user gave intimate details on her husband’s journey to work today, describing it as absolute chaos. “My husband took the LRT to Kelana Jaya, and three buses to get to Ampang Park — 2.5 hours in total!”

Others also gave a rundown of their personal circumstance, highlighting the additional issues they’ll have to face with the LRT being down.

“Took me two hours to drop off my sisters at work in what could’ve easily been 30 to 40 minutes. Traffic is congested and it’s not even funny. I honestly feel very sorry for those who rely on LRT Kelana Jaya.”

Another person, who is a frequent public transport user, expressed how the 16 lines that were halted are some of the most crucial stations on the Kelana Jaya line, “This has to be the lowest ebb our LRT system has come to.”

Meanwhile, one young person mentioned how an important internship presentation of his would be delayed, affecting a pivotal work day for him at the office.

A couple of others chimed in on the trickle effect the halt has for vehicles on the road. “Everyone is using their car to go to work. My area has never seen a jam like this before,” lamented one user.

One final user also took a jab at the LRT stations, saying that at first, it was escalators that were not working, and now, it’s the LRT itself.

In an official statement put forward by Rapid KL, it was revealed that the root cause of the breakdown has not been determined yet

Conveyed by the chief executive officer (CEO) of the Land Public Transport Commission, Mohd Azharuddin Mat Sah, the unknown issue caused a loss of signal between the control offices and the trains, thereby preventing the trains to move along automatically between the Kelana Jaya LRT station and the Ampang Park LRT station.

Extending a sincere apology to the public for the trouble caused, Azharuddin, on behalf of Rapid KL, mentioned that this is the first time an issue such as this has happened. He carried on by mentioning that Rapid KL is currently waiting for assistance by a special team of the original equipment manufacturer, Thales Group, based in Toronto, Canada.

In an attempt to find short-term and long-term solutions, he specified that tests will be carried out on existing software and devices.

Nonetheless, Azharuddin mentioned in a press conference this morning, 9 November, that the 16 stations would be halted for one week to ensure the safety of everyone involved in the process.

“After weighing out a number of safety factors that concerns passengers, the time that is needed to find the root issue of the disruption, and testing that’ll be required, the LRT stations between the Kelana Jaya stop and Ampang Park stop need to be halted for seven days, beginning at 6am today (9 November),” he said.

Despite this, Azharuddin assured that all the other stations outside these 16 on the Kelana Jaya LRT line will function as normal, with operations ending earlier daily, at 11pm, for the time being. He also stated that free shuttle busses will be provided for users, so as to avoid confusion and overcrowding at the affected stations.

“Rapid Rail will continue to work hard to solve this issue as soon as possible,” he concluded in his official statement.

Despite these issues, many Malaysians have come forward to help each other guarantee transportation:

If you’ve got some extra cash to spend, try out these e-hailing apps that’ll help you get around: