“It’s A Privilege” — Malaysians Debate: Is It Worth Voting For #GE15 Or Not? 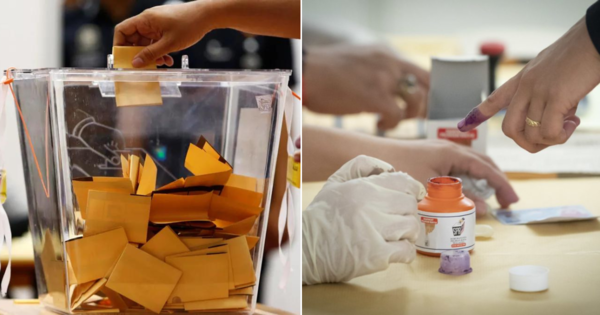 With a monumental election coming up in just a few days, the idea of voting has not been conclusive for some Malaysians

A Reddit user who goes by the handle u/lazylendo recently posted a question of his to the r/Malaysia subreddit group, a community dedicated to discussing and dissecting all topics relating to anything Malaysian.

Heading his post with the title “Vote or not?”, the user detailed a recent talk he had with his friends about their plans to vote in the upcoming #GE15 election — more specifically, how they’re not planning to vote.

“I just had a talk with my peers and found that most of them still think that Malaysia is hopeless, and there’s not point in voting. It’s kind of sad to hear that from 18 year olds who are now eligible to cast their vote.”

The user went on to explain that most of them lament over the hassle to go out and vote, to wait in line just to cast one vote. He mentioned that if the voting process could be done online, they’d vote. Ending his post, the user asked Reddit what their view on this matter is, and how he could convince his friends to vote.

An overwhelming majority of users expressed the inherent importance of voting for GE15, and how every Malaysian owes their vote to the nation

“Voting is a privilege,” said one user, noting that it is a sad matter for young people to think that their vote doesn’t matter. Using an analogy to dissect his point, they explain how one vote can make all the difference.

“Even if it’s one vote, it’ll still make a difference. Imagine if 100,000 youths have the same mindset and don’t exercise their vote, how will they ever be heard? To me, a chance at change is better than no chance of change,” they added.

Opting to stay neutral on the topic, one man supported this view to vote by stating that the impact of their decision could be groundbreaking. “One vote may seem small, but if all of us contribute to voting, we can basically change [the] history of Malaysia.”

Adding economic context behind the idea of voting, one user broke down how one’s personal finances will be affected by the outcome of the vote.

“Voting affects EVERYTHING. The price of eggs, the availability of chickens, the loan you have to pay when borrowing money for a car, house, or phone, and even the returns on the EPF you pay every month.”

Taking this idea one step further, another Reddit user explained how voting for ‘safe seat’ areas will inherently trickle into the future of those districts.

A few comments came from other young voters who expressed their personal take on the importance of voting.

“We youths are now mature enough to vote, we have to encourage our peers as well. We should be grateful that we can vote when not everyone can. Moreover, election day is the only day the rakyat gets power. It’s a once-in-five-year opportunity.”

Another young voter expressed his excitement for voting this coming election, citing that his friends all share the same excitement as well.

One user expressed his motivation to vote out of pure fun, to experience what voting is like.

“As someone who is extremely pessimistic of the future of the nation and whether or not my vote even matters, the only way I convinced myself to go is that I’ll be going to vote for fun. Not to say I will ruin the vote or anything, I just don’t put high hopes on the process, or that anything will change.”

However, a fair share of the responses criticised young people for using shallow excuses as the basis for not voting in GE15

“The problem is probably, they literally don’t know jack about politics, their vote may or may not contribute to the downfall, so they’re afraid,” said one user, while someone else sarcastically mentioned how they’d line up for the latest iPhone, though not to vote.

“Kids. And they say boomers have given up on the fight.”

Trying to take a more encouraging approach, one user expressed how it would be a shame not to vote. “Willingly giving up the one actual avenue for policy change just because it’s a little inconvenient is a tragedy.”

Another person reminded the Reddit user who made the post that there are many people in Malaysia who want to vote, but cannot vote due to their personal circumstances.

Others tried to dispel the misconceptions conveyed by the author of the post in relation to voting day, more specifically, the amount of time it takes to vote

“I never had to queue so far. But maybe it’s just my area,” responded one person.

One user gave a plethora of ways for voters to entertain themselves if they get bored having to wait on voting day.

“You can ask [your friends] to go vote together with their family. Go in a group, so it’s not so lonely. Take your phone so you have something to do. Take an umbrella and water in case it’s hot, and last of all, go early so [you won’t be caught in a long] queue!”

A couple of others harshly told the user to remind his friends that if they don’t vote, to not complain about the outcome, “You have no right to complain, because you had the power to change things, but you chose to be indifferent and not exercise it.”

Another person gave his take on the annoyance of people who decide not to vote.

“Imagine if 10 people vote on where to eat. Three people decide not to vote, then after the group decides and starts eating, the three who didn’t vote, start complaining about the food. Stupid, right? Nobody can force you if you don’t want to vote, but you don’t get to have an opinion on the election results.”

Nonetheless, a portion of the users conveyed how they do not plan to vote for GE15, while citing their respective reasons

Considering a bunch of factors, one user stated how a mixture of expensive flight tickets, no candidate they truly support, and a plan to move out of the country have contributed to their decision not to vote.

“I’d still encourage people who can vote to vote, but for me, the cost to vote doesn’t match either result.”

Another person doubled down on the message conveyed by the poster’s friends, relating to the ‘hopelessness’ of the nation, “Not to say it’s hopeless, but there’s no candidate worth voting for.”

One user expressed how they won’t be voting this year for one reason only: because they are not Malaysian. “But you should really do it. How hard is it to tick a box?” they wrote.

All in all, one comment seemed to encompass the entire spectrum on the purpose to vote this GE15:

For all first-time voters, here are some things you need to know before voting:

Remember, you are entitled to time off or leave to vote this #GE15:

Before voting day, make sure to check your voting details and your voting station via this online platform: