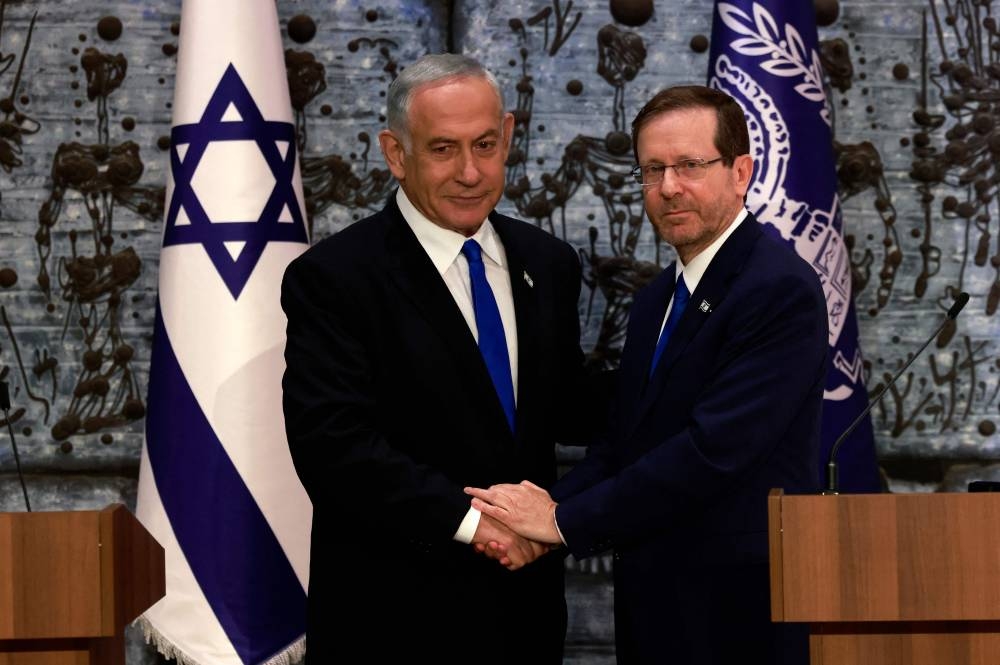 JERUSALEM, Nov 14 — Israel’s veteran ex-premier Benjamin Netanyahu secured a mandate Sunday to form a new government, paving the way for his comeback at the helm of what is expected to be the most right-wing administration in the country’s history.

After a period of unprecedented political gridlock tested the electorate with five votes in less than four years, the November 1 election gave Netanyahu and his far-right allies a clear majority in the 120-seat parliament.

“I have decided to assign to you, Benjamin Netanyahu, the task of forming a government,” President Isaac Herzog told him at a ceremony in Jerusalem.

Accepting the mandate, the 73-year-old right-wing politician widely known as “Bibi” vowed to serve all Israelis, “those who voted for us and those who did not — it is my responsibility”.

Netanyahu, who is fighting corruption allegations in court, will have at least 28 days to build a coalition with his allies — two ultra-Orthodox Jewish parties and a rising extreme-right alliance called Religious Zionism.

Herzog noted Netanyahu’s ongoing trial: “I am not oblivious, of course, to the fact that there are ongoing legal proceedings… and I do not trivialise this at all”.

But he said that recent precedent made clear Netanyahu could serve as premier and defend himself.

Netanyahu can seek a two-week extension to his initial mandate but is expected to announce a coalition deal reasonably quickly, given broad ideological unity within the incoming government.

Itamar Ben-Gvir and Bezalel Smotrich, co-leaders of the Religious Zionism bloc, have publicly demanded control of two key ministries — public security and defence — at a time when Israeli-Palestinian violence has soared.

Reports say Netanyahu is reluctant to hand Smotrich the sensitive defence portfolio, but that Smotrich is very much open to becoming finance minister instead.

But Arye Deri, chairman of the ultra-Orthodox Shas party, has eyes on the finance ministry too. Smotrich and Deri met on Sunday afternoon in a bid to reach an agreement.

Netanyahu’s next moves will be closely scrutinised, as unease mounts in some quarters over his policy plans and the goals of his controversial partners.

But he insisted that those seeking to “prophetise catastrophe and scare the public” are misguided.

“It’s not the first time we have heard this kind of talk,” he said. “It was wrong then and it is still wrong today,” he added, without elaborating.

The new government is however widely expected to pass sweeping judicial reforms, a long-held priority of Israel’s right. That could include giving parliament the right to override the supreme court any time it declares legislation to be illegal.

Suzie Navot, a constitutional law professor at the Israel Democracy Institute think tank, said “it is difficult for me to exaggerate the damage and danger” of such reforms.

The centrist Yesh Atid party of outgoing Prime Minister Yair Lapid on Sunday condemned a “dark day for Israel’s democracy,” in an apparent reference to the judicial reform package.

Yesh Atid charged that the incoming government’s goal was to “save Netanyahu from his trial”.

Ben-Gvir, a firebrand known for anti-Arab rhetoric and incendiary calls for Israel to annex the entire West Bank, has repeatedly called for security services to confront Palestinian unrest more harshly.

Recent months have been the deadliest in years in the Israeli-occupied West Bank according to the United Nations, with near daily army raids and an increase in attacks on Israeli forces.

Herzog, whose role is largely symbolic, was reported to have tried to convince outgoing premier Lapid and his defence minister Benny Gantz to form a unity cabinet with Netanyahu, in order to keep Ben-Gvir from entering government.

The presidency publicly denied the claims.

But Herzog this week told Ben-Gvir that he had received “questions from Israeli citizens and world leaders… very sensitive questions on human rights”.

The president added: “There is a certain image of you and your party which seems — and I’ll say it in all honesty — worrying in many regards.”