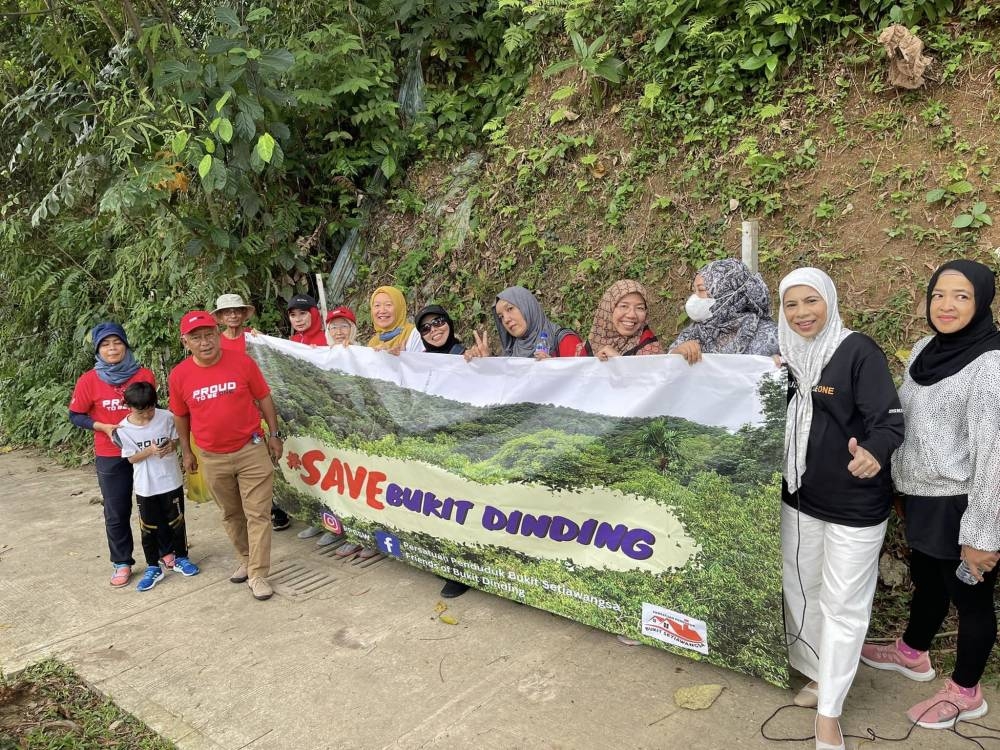 KUALA LUMPUR, Oct 9 — Residents have demanded Nova Pesona Sdn Bhd release all technical reports for its projects around Bukit Dinding after the real estate developer insisted that it had complied with safety and environmental regulations needed to build over a thousand units of posh condominiums and villas on the foothill of the popular but landslide-prone trekking spot.

Homeowners from surrounding Wangsa Maju and Setiawangsa said the developer has so far refused to share them despite repeated calls to reveal the impact studies that have been cited to justify its development plans around the hills, which the company claimed is safe despite incidents of landslides having been reported even before construction around the area had even begun.

Making the reports public is crucial so that residents can independently audit them, said 61-year-old Izaidi Md Ismail, a resident from Section 5 Wangsa Maju and a member of the local residents association there. Izaidi was among dozens of homeowners who attended the meetings where they fought against the project.

The meetings were held between Nova Pesona, City Hall (DBKL) officials and residents, first in 2015 and the most recent one in September.

“The meetings were attended by representatives of so many RAs and we told them we strongly oppose the project,” Izaidi told Malay Mail.

“At both meetings we asked for all the technical reports — the EIA (environmental impact assessment) report, the traffic impact assessment report, the social impact report and even the geological and soil investigation report. Instead of providing them they just told us ‘you can find all of it on our website, it’s open source’,” he added.

“Some of us checked on their website and we couldn’t find the reports.”

Bukit Dinding, while just under 300 metres tall, has been a popular recreational spot for folks around the city. But the lush hill — believed to be the tallest within city limits — is also known to be landslide-prone, according to homeowners whose homes dot the surrounding areas.

Since news about the development plan surfaced, hundreds of concerned residents have mounted a drive to pressure DBKL against allowing the project, worried that the development around the steep hill could worsen existing landslide problems. Homeowners said they first heard about Nova Pesona’s plan to develop the area as early as 2013.

Izaidi said residents oppose the project for various reasons but are mostly worried about potential landslides. Studies held by homeowners suggest Bukit Dinding shares the same soil quality to other landslide-prone areas within Ulu Klang, including Bukit Antarabangsa where a major landslide took place in 2008 and Ukay Perdana, where the Highland Towers were built.

Built on the slopes of steep hills around Taman Hillview, Ulu Klang, Selangor, Block 1 of the Highland Towers collapsed in December 1993 after a heavy downpour caused a major landslide. The tragedy killed 48 people.

“We checked with residents from those areas and they (Nova Pesona) keep singing the same tune (as other developers) about how they can make sure it’s safe and all that. Then (landslides in) Bukit Antarabangsa, Taman Zooview and of course the Highland Towers happened,” Izaidi said.

“We are worried. That’s why if they say it’s safe we want a third party to vet these reports. We can’t wait until it’s too late, lives are already lost, then only the authorities will act.”

Malay Mail could not independently verify the allegation but various incidents of soil erosion and landslides around Bukit Dinding have been well-documented by residents. Some have been caught on video or camera and have been shared on a Facebook page set up by a group called Friends of Bukit Dinding, founded by members of various surrounding residents’ associations.

Bukit Dinding is situated on land that was formerly a plantation. Its owners later diversified into real estate development following a common business practice among large plantation companies. As they own large tracts of land, much of it is later converted for housing and towns.

According to the Kuala Lumpur City Plan, large parts of Bukit Dinding have been designated for conservation, but the foothills have been zoned for “housing” as early as 1983. Only the peak of the hill has been designated as a no-development zone.

Nova Pesona, a subsidiary of Tan & Tan Development Sdn Bhd, owns the largest parcel out of the five parcels carved out and zoned for “housing” there. All are owned by private developers.

For the first phase of its project, Nova Pesona plans to build a 300-unit condominium on six acres of parcel 2, Lot 26413, west of Bukit Dinding. It’s the first phase of a project consisting a total of 1,212 units of residentials including condominiums, link houses and villas among others. The EIA was approved in 2017, the company said.

Nova Pesona, facing growing scrutiny, in a statement issued on September 28 said the property project it is undertaking there complies with all safety and environmental regulations, and that the EIA had been approved by the Department of Environment twice, first in 2004 followed by a second approval in 2017.

It also pointed out that it had held consultations with residents as required by Rule 5 of the Planning Development Amendment Rules 1994, a bylaw under the Federal Territory Planning Act 1982, a crucial provision meant to allow homeowners from the land adjacent to a proposed development to file objections.

Izaidi scoffed at the statement.

“Of course they would point that out but they should have also pointed out that residents at the consultation unanimously said no to the project. Instead they’re inferring that we gladly went along,” he said.

DBKL has so far responded by saying it would block any development work along the foot of Bukit Dinding but only until “the strategic communication session with residents has been finalised.”