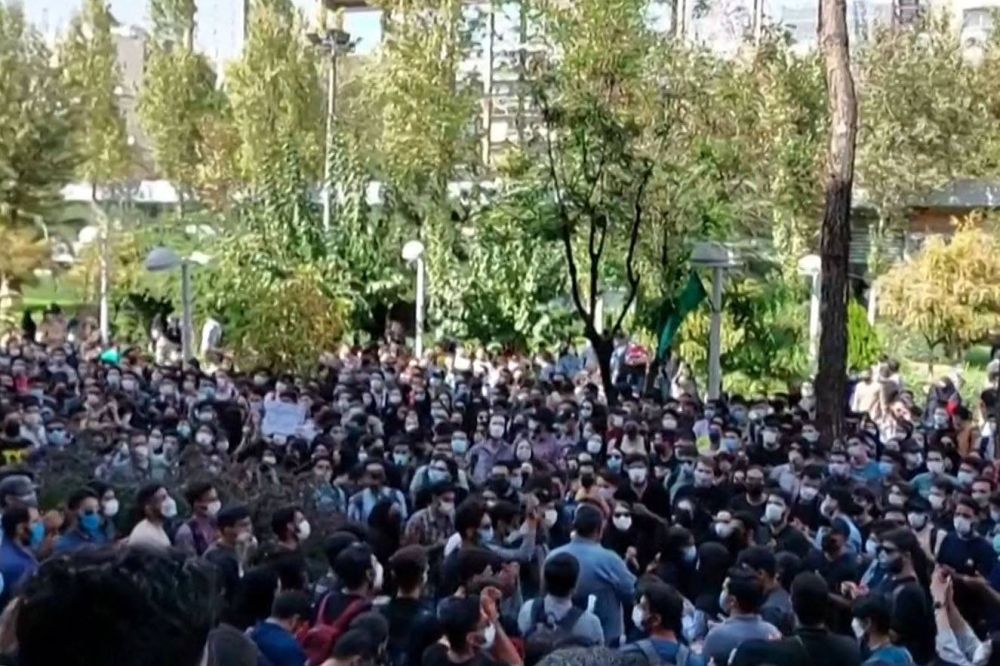 This grab taken from a UGC video made available on the ESN platform on October 10, 2022 shows Iranian students chanting slogans as they protest at Tehran’s Amirkabir University of Technology. – Handout via AFP

Videos posted on social media indicated that protests flared at various points in the capital and other cities over recent days, with women burning headscarves and shouting slogans against the Islamic republic.

Kurdish rights group Hengaw accused the authorities of using heavy weaponry, including “shelling” on neighbourhoods and “machine gun fire”, in the northwestern city of Sanandaj – claims which could not be independently confirmed amid widespread internet blocks.

The unrest erupted more than three weeks ago over the death of Mahsa Amini, 22, an Iranian woman of Kurdish origin who died following her arrest by the notorious Tehran morality police who enforce the strict dress rules on women including compulsory headscarves.

Activists say she was beaten in custody, while the authorities in Iran have released a medical report blaming a pre-existing condition.

The protests have channelled anger among some Iranian women over the compulsory headscarf, but have also seen slogans shouted against the Islamic system created by late revolutionary leader Ayatollah Ruhollah Khomeini after the ousting of the shah in 1979.

Oslo-based non-government group Iran Human Rights (IHR) shared images of a sit-in protest at the northern Gilan university and of high school girls in the northern town of Mahabad removing their headscarves.

It also posted a video which it said showed a large crowd of students outside Tehran polytechnic on Monday denouncing the “poverty and corruption” in Iran and shouting “death to this tyranny”.

Students at universities including Tehran Azad also painted their hands red to evoke the crackdown by the authorities on the protests, images showed.

Analysts say that the multi-faceted nature of the protests – ranging from street marches to student strikes to individual actions of defiance – has complicated the state’s attempts to quell the movement.

This could make the protests an even bigger challenge to the authorities under supreme leader Ayatollah Ali Khamenei, 83, than the November 2019 protests against energy price hikes that were bloodily put down.

One viral video was said to show a woman bare-headed in defiance of the dress code, in a street in the northwestern city of Kermanshah with outstretched arms and offering “free hugs” to passers-by.

There have also been signs of labour unrest. Videos broadcast by Persian media based outside Iran showed striking workers burning tyres outside the Asalouyeh petrochemical plant in the southwest, with reports of strikes at other refineries too.

In an act of cyber defiance, the hacking group Edalat-e Ali (Ali’s Justice) had posted an image during the main state TV evening news on Saturday of Khamenei in crosshairs and being consumed by flames.

The crackdown on the protests sparked by Amini’s death has claimed at least 95 lives according to IHR.

Another 90 people were killed by the security forces in Iran’s far southeastern city of Zahedan from September 30 after protests sparked by the alleged rape of a teenage girl by a police chief in the Sistan-Baluchistan province, said IHR, citing the UK-based Baluch Activists Campaign.

State media have said 24 members of the security forces have been killed overall, including in the Zahedan unrest.

Foreign ministry spokesman Nasser Kanani warned yesterday the government would “not stand with its hands tied in the face of chaos and disorder”.

Campaign groups including IHR have also pointed to videos showing brutality by the security forces, including a defenceless protester beaten by baton-wielding police while taking cover in a building.

US National Security Advisor Jake Sullivan said the “world is watching”, in a post on Twitter yesterday.

“Over the weekend, innocent protestors including a young girl were shot dead,” Sullivan added. “The President of Iran compared protestors to ‘flies.'”

Activists also accuse the authorities of a campaign of mass arrests and travel bans to quell the protests, with celebrities caught up in the dragnet.

Ali Daei, once the world’s top international goalscorer in men’s football, had his passport confiscated on returning to Tehran from abroad after bitterly criticising the Islamic republic on social media, Iranian media reported.

Daei told AFP yesterday the passport was returned to him “after two or three days”. – AFP