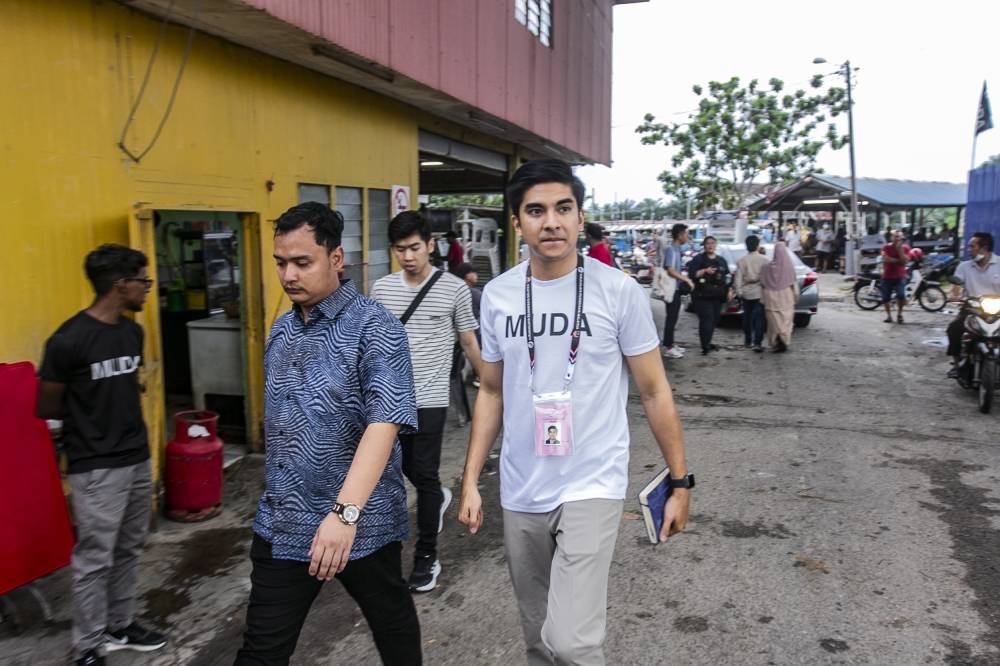 MUAR, Nov 11 — He calls himself Abang Din, and was once an Umno supporter. Today, at age 44, he works hard to campaign for the youth-based Malaysian United Democratic Alliance (Muda), the party founded by Muar native Syed Saddiq Abdul Rahman.

This year will mark his third as a worker and member of the nascent outfit, a fact that Abang Din shared with teeming pride.

“If you ask me why I turned away from Umno-Barisan Nasional I won’t go too much into it. I don’t want to badmouth Umno.

“But if you ask me if I think Muda or Umno is better, I’d vote for Muda,” he told Malay Mail.

As a youth-based party just two years of age, Muda carries with it a certain image — highly urbanised with a leadership mostly comprising tech-savvy professionals-turned-activists who constantly tweet political messages with their smartphones.

It’s a stereotype that has become the stuff for memes among Syed Saddiq’s critics. One of the jokes heard about Muda is that the party is said to be filled with those who obsess over gimmicky TikTok clips and what brands of mirrorless cameras to shoot their campaign message with.

Abang Din would hardly fit that picture. He considers himself a simple “kampung boy” whose identity is proudly rural Muar and a part of the fishing community that once thrived in the now-bustling town, where business and services appear to have taken over as the heart and pulse of its economy.

Yet he and many other elderly or middle-aged men like him form an integral component of the Muda’s machinery in Muar. Abang Din is unofficially the captain of the party’s Parit Kedondong “skuad terbang”, Malay for “flying squad”.

These are the party’s ground campaigners, the ones that go door to door to canvass support, the “frontliners” who usually put themselves in awkward situations so they can engage voters directly and explain the candidate’s vision for the constituency.

“It’s still very important to meet people, go to their homes and explain to them what Syed Saddiq is fighting for,” Abang Din explained.

“If you don’t explain to them directly it’s hard to gauge if they’re receptive to the idea. You can send all the messages you want on WhatsApp and whatnot, but will you actually know what they think? Of course not,” he went on.

The meeting with Abang Din was a chance encounter during Malay Mail’s initial visit to Parit Kedondong, a tiny fishing village located about two kilometres from the Muar coastal line and a few kilometres away from the Parit Jawa town, where Syed Saddiq was reported to have helped fund some development.

The fishing community in Parit Kedondong, while not as impoverished as some of the country’s poorest, is still deemed underprivileged by Muar’s standards.

And while voters there number in just the hundreds, Syed Saddiq and Muda have made it among the seat’s key battlegrounds, likely a symbolic move which effects could reverberate positively among Muar’s Malay voters. There were over 62 per cent Malay voters in the last general election out of those eligible, followed by Chinese at a third.

Sabtu Abu Bakar, 62, and Rin, 51, also part of Muda’s squad said Syed Saddiq had done much to help the community there during the four years he served as MP.

Both of them, who shared between them four years of service for Syed Saddiq, said it was the party president’s generosity that had drawn them back to a youth-based party like Muda.

“I think his biggest contribution was the foodbank. He made sure everyone had access to basic foods. Then he also helped do repair work like fixing roofs, toilets and putting up lights in the village when it used to be pitch black,” they said.

Whether or not this positive sentiment is shared by most Muar voters, or the fishing community even, remains to be seen. Syed Saddiq will face Barisan Nasional’s Mohd Helmy Abd Latif and Perikatan Nasional’s Abdullah Husin in a three-cornered fight.

Both Mohd Helmy and Abdullah Husin are Muar natives, and are said to be popular. But there are views that the latter is the biggest threat to Syed Saddiq’s defence of the Muar seat.

Kamarul Hazar, 36, the youngest of the Muda workers there, joined the squad only a year ago. Like others, he too felt Syed Saddiq’s service to the community was too hard to ignore and that he had joined the party because of how strongly he felt about the former MP’s pro-people politics.

“You don’t need all those signatures and whatnot [like you get with other parties when they ruled]. He just looked at your MyKad [and if you have a Muar address] he made sure everyone got food, it doesn’t matter what your income is.