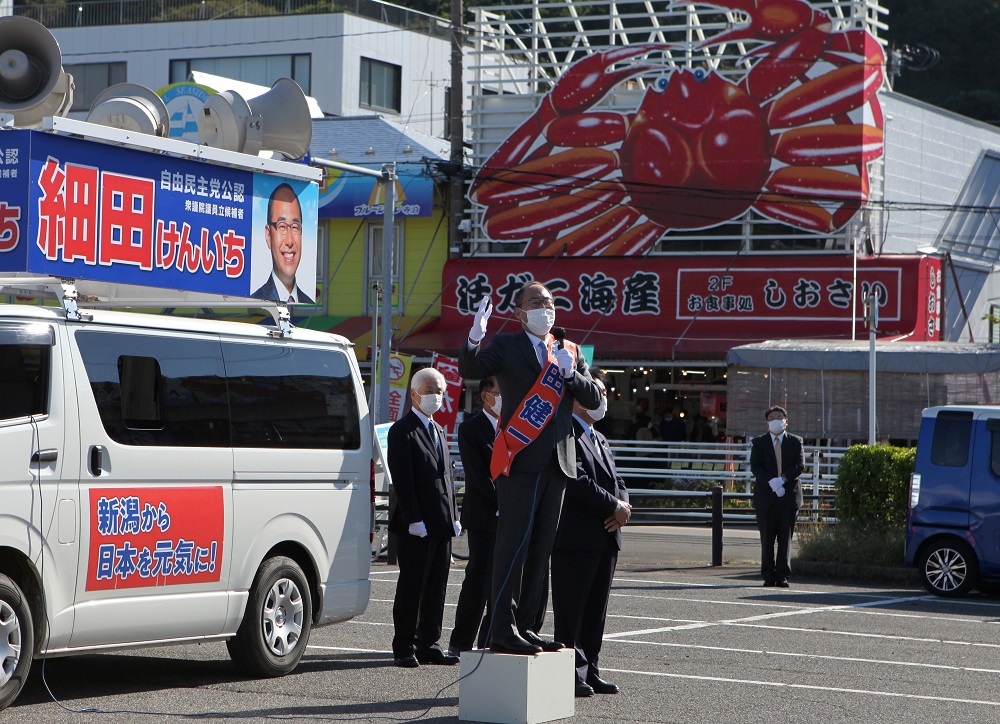 TOKYO, Oct 28 – Momoko Nojo’s campaign for Japan’s upcoming election revolves around social media and T-shirts, but she’s not running for office. Instead, the activist is fighting a different battle – against the apathy that keeps young voters away from the polls.

It’s no wonder the young don’t vote, with many of them saying candidates are overwhelmingly male, old, and disconnected from their concerns.

Only 10 per cent of lawmakers in the just-dissolved lower house were women; the representation of female candidates in the ruling coalition is even lower. The average age of male and female candidates is 54, with more than a third aged 60 and above. A handful are over 80.

Women’s rights are not debated, and other issues such as gender equality, support for young families, the dire labour shortage and dysfunctional immigration system are also barely on the agenda.

The disconnect means that in elections over the past decade only a third of young voters turned out, and some analysts fear participation in the upcoming October 31 poll could be the lowest in post-war history.

“In this situation, young peoples’ voices won’t be reflected in politics,” said Nojo, 23 and a graduate student.

“By not going to vote, life will become more difficult for this generation. Whether it’s problems with raising children, or other issues, to get politics to turn to our generation you have to vote, you have to take part.”

Japan’s situation contrasts with that of the United States, where, according to the US Census Bureau, voter turnout of those aged 18-24 was 51 per cent in the 2020 Presidential election.

Nojo, who developed an interest in activism while studying in Denmark, is not easily discouraged and has already triumphed against huge odds. Early this year she shot to fame with a campaign that ousted octogenarian Tokyo Olympics head Yoshiro Mori after he made sexist remarks.

But apathy among young voters is deep-seated and reflects long-term systemic issues in Japanese politics, often dominated by families who have been elected through generations, analysts said.

That the ruling Liberal Democratic Party (LDP), which is on track to suffer hefty losses in this election, has held power for all but a brief period over the last six decades also creates a sense change is impossible.

“I don’t go to vote because there’s just no feeling it’s connected to my life,” said Takuto Nanga, 22 and a comic illustrator. “Even if the top changes, there’ll still be problems like in the past.”

For women, things are especially bad. Only 9.7 per cent of LDP candidates are women, with 7.5 per cent for coalition partner Komeito.

“Even elected, women lawmakers don’t get a chance at the important cabinet portfolios. There are only a handful in the cabinet, and there should be so many more. Then women would have the sense they’re taking part,” said Airo Hino, a Waseda University professor.

While emphasising issues such as climate change, cutting university fees and gender equality would help lure younger voters, the process also has to be appealing, Hino argues.

That means rejecting traditional campaigning in newspapers, stump speeches and turgid political appeals on NHK public TV for social media – which some politicians, such as Taro Kono, often cited in polls as a top choice for premier, have used to good effect.

“It’s mainly a game, but that’s fine. In a lighthearted way you find a party you like, then you go vote,” said Hino.

Aside from her online campaigns for “No Youth No Japan”, Nojo has taken a similar tack, partnering with a clothing firm to produce a series of T-shirts with quirky designs emphasising issues – life, peace, equality and the planet – and voting.

“Clothes are worn daily, it’s a form of expressing your opinion and showing yourself,” Nojo said, with the hope being they’d become conversation starters and spur wearers to vote.

That something must be done is painfully clear.

“With a larger population and higher voting rates, inevitably the voice of the older generation is stronger,” said Ayumi Adachi, 20 and a student.

“To get what we want, we need to speak up. We need to vote.” – Reuters