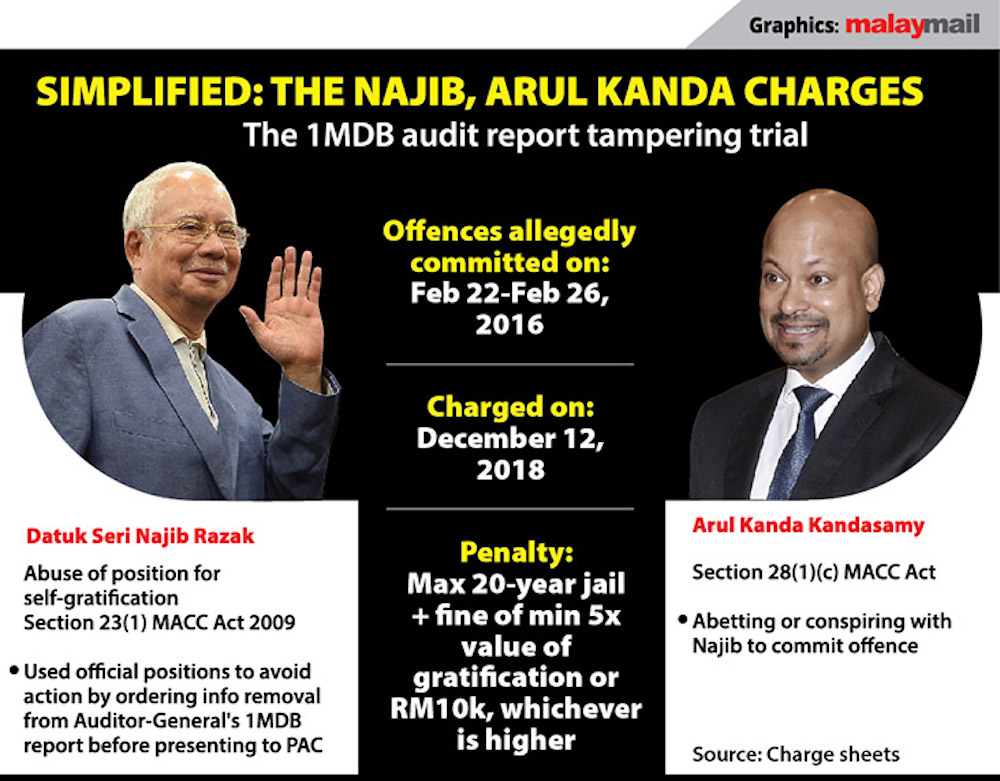 KUALA LUMPUR, April 12 — A former 1Malaysia Development Berhad (1MDB) chairman today said he had “suspicions” regarding then prime minister Datuk Seri Najib Razak after the latter urged for the 1MDB board to expedite its decision in 2009 on whether to approve the company going into a joint venture.

Tan Sri Mohd Bakke Salleh was commenting on the haste in which the 1MDB board was pushed into deciding on the week-old proposal for the joint venture between 1MDB and purported partner PetroSaudi International, with 1MDB then pumping in US$1 billion into this joint venture deal.

Bakke was testifying as the 13th prosecution witness in the trial of both Najib and former 1MDB CEO Arul Kanda Kandasamy over the alleged tampering of the auditor-general’s 1MDB audit report.

Just before the next 1MDB board meeting on September 26, 2009 to discuss the joint venture could start, Bakke had also said that the then prime minister Najib had spoken to him in a phone call on Low Taek Jho’s handphone — passed by Low himself to Bakke.

Bakke said Najib had asked the 1MDB board to “firm up a decision as soon as possible” and had also expressed his wish to witness the signing of the deal at the end of September 2009, adding that it was this phone call that had resulted in the 1MDB board going ahead to give a conditional approval for the deal without waiting for the usual process to be done.

Suspicions about Najib before resigning as 1MDB chairman

Najib’s lead lawyer Tan Sri Muhammad Shafee Abdullah today noted that Bakke had previously said he was “disgusted” with the 1MDB management, and then questioned if Bakke had met with then prime minister Najib before resigning from the 1MDB board.

“Before you even thought of putting in your resignation, did you have the courtesy of seeing the prime minister and say I’m afraid I have to resign and these are the reasons, did you do that?” Shafee asked.

“I didn’t because at that time I also had this feeling, suspicion that the former prime minister is also in the loop on this, very much informed in the scheme of things on the investment with PetroSaudi,” Bakke replied.

“So I decided that I would not want to go and see him personally, because I wasn’t comfortable also. These feelings were shared by my board members, this investment and the manner in which we had to work on it to firm up the decision. But the one that completely confirmed our suspicion and made me very disgusted and unhappy with what happened was the way the US$1 billion was remitted,” he added.

Bakke was referring to how the 1MDB board had on September 26, 2009 gave a conditional approval to the joint venture deal even without due diligence having been completed, noting that the 1MDB board fixed four conditions to protect 1MDB’s interests while also at the same time enabling a decision to be made on the deal as Najib had urged.

One of the four conditions was for the US$1 billion that 1MDB was investing in to be placed into a bank account belonging to the joint venture company with PetroSaudi.

But the 1MDB board later found out on October 3, 2009 from the 1MDB management that US$700 million of the US$1 billion had been diverted elsewhere while only US$300 million was sent to the joint venture company.

In another trial against Najib over the misappropriation of RM2 billion from 1MDB, it was shown that the US$700 million went to Good Star Limited, a firm owned by Low.

Bakke said he informed Najib through a text message about how the 1MDB management had disregarded the 1MDB board’s instructions by splitting the US$1 billion into two transactions, and explained that he did not meet and speak directly to the then prime minister about this.

“I could but I didn’t do that because I somehow felt very uncomfortable with the role played by PM,” he said.

As Shafee asked Bakke to explain further about his suspicion on Najib, Bakke questioned “why the need to work, you know, in such a hurried fashion”.

Shafee pressed Bakke to elaborate on his suspicions about Najib as the then prime minister.

“My suspicion was centred more on why expedite it, even be in a position to ignore the normal process of doing a project evaluation.

“Why do we have to do it in a hurried fashion, you know, when you are pressed to do something against the conventional approach, it cannot stop someone from drawing conclusions or even trying to figure out why do we have to do this,” Bakke replied.

Shafee then suggested that Bakke was “barking at the wrong tree”, claiming that it was the 1MDB management that had failed the 1MDB board and suggesting that the prime minister could not be blamed as he could not micromanage.

“We were not pleased with what happened, and my own conclusion, the one that I have made after what happened, is that, if not because of the phone call with the prime minister, the board would not have rushed through the evaluation of the process. So until today, I would certainly flag this out as being the crunch.

“For that reason, that’s where the suspicion, my own suspicions came about, because the phone call and the manner in which the message was conveyed to me to be passed on to the board, so I looked back, and said, if only PM had not spoken to me and got Jho Low to make that phone call to him, I think we would have the benefit of looking at this the way we would have done in any normal project appraisal or evaluation,” Bakke added.

Shafee then asked if Bakke was suspicious that then prime minister Najib was “going to steal the money”.

Bakke explained that his suspicion was not in the context of Najib trying to steal money but that it was about the doubts of why there was a need to push through on the deal without going through the normal process or normal protocols.

Bakke agreed with Shafee’s suggestion that he had formed the opinion that he could not trust the 1MDB management including its then CEO Datuk Shahrol Azral Ibrahim Halmi, after it did not follow any of the four conditions that the 1MDB board had set for the joint venture approval in 2009.

“At that time, that was the feeling that I had, but later on it was also confirmed by Datuk Shahrol to me,” the witness replied when Shafee asked if he had any evidence that the 1MDB management was taking instructions from the prime minister instead of the 1MDB board.

Bakke explained that he had met with former 1MDB CEO Datuk Shahrol Azral Ibrahim Halmi six years later from the events in 2009.

“I met him and asked him how could all these things have happened, and he actually said he was taking orders from Jho Low and the prime minister. That was what he shared to me, not that I trusted him, I’m just sharing to you what he said to me, I don’t trust him even until today,” Bakke said.

Under questioning from lead prosecutor Datuk Seri Gopal Sri Ram, Bakke said the impact of the phone call with Najib on a handphone handed over by Low was that he understood the joint venture “ought to be pursued quickly, we need to really fast track our decision-making process” and that 1MDB had to “race through the process”.

As for his suspicions regarding Najib being involved in the irregularities surrounding the joint venture, Bakke confirmed that Najib did not do or say anything to him that “allayed” his suspicions.

Bakke agreed with Sri Ram that the basis of his suspicion on Najib was the speed in which the entire joint venture happened, also agreeing that he viewed then 1MDB CEO Shahrol as not following the instructions of the 1MDB board as he was “answering to a higher power”.

Bakke agreed that during his tenure as chairman of both 1MDB and its predecessor Terengganu Investment Authority, Arul Kanda was not involved with the company and that he had also never met with Arul Kanda at that time.