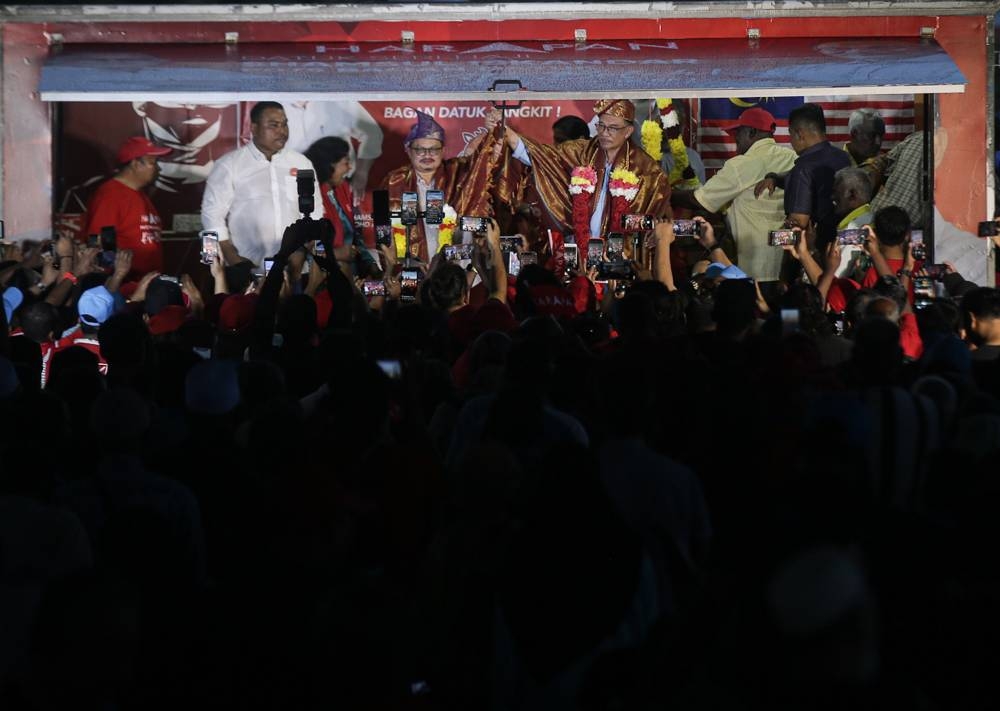 BAGAN DATUK, Nov 15 — As the seat of Umno president and former deputy prime minister Datuk Seri Ahmad Zahid Hamidi, Bagan Datuk would be expected to be an impenetrable bastion to rival parties and would-be challengers.

However, two of the last three elections have shown there were chinks in Zahid’s armour, with the Barisan Nasional chairman winning with just over 2,000 votes in these.

When Malay Mail arrived on a Monday afternoon at the heart of the district, Bagan Datuk town appeared lethargic, with sound of the scant traffic easily overpowered by birdsong.

Dominated by an empty square and a clock tower that no longer told the time, little else stood out about town save for a beautiful waterfront and a blue-roofed mosque that appeared as though rising up from the sea.

Navigating the town that was 500m across took just five minutes on foot, a journey Malay Mail made in a fruitless search of residents to poll for their views about the 15th general election.

Fisherman Muhammad Haidi Zakaria points towards a crooked wooden floor in a room that he used to sleep in. — Picture by Farhan Najib

A kilometre away, Mail Mail came upon one of eight fishing villages outside of the town and found 34 year-old fisherman Muhammad Haidi Zakaria sitting in a porch of his house.

Living right at the edge of the village, Muhammad Haidi’s face broke into a wide grin when asked about the election and politicians, eager for his chance to vent about broken promises.

“They always come with a pen and tell us to write about our concerns or problems on a piece of white paper and have promised the moon and the stars every five years.

“They said my family and I must wait until after they win and get all the funds to meet my concerns. I waited and waited but still got nothing even after more than ten years,” Muhammad Haidi said, simmering.

Ahmad Zahid first won the Bagan Datuk Seat in 1995 and has remained its federal lawmaker since.

Not content with his grouses, Muhammad Haidi sought out his uncle, Abdul Rashid Abdul Malik, 72, at the latter’s home where he was organising his fishing tools on the floor that was sagging dangerously low, as though just one high tide away from being washed into Sungai Perak.

Also a fisherman, Abdul Rashid said he has lived there his whole life and watched as erosion ate away at the river bank each year and listened to the promises of mitigation and rehabilitation.

“Years ago, I couldn’t even see the water from my house and there was a whole neighbourhood in front of us.

“And as you can see, they only use coconut trunks, particularly in my family’s housing area, and have been embanking the riverbank but they know it is a short-term solution,” he said while rolling up his nets.

Inside, the floors were worn in some areas and warped in others. A rubber mat lines his living room, parts of which were waterlogged. Further within were two rooms in which he once slept, but were now on the verge of collapsing.

Like his nephew, he said he has also heard promises before, promises of new fishing nets and boat engines to help with their catch once the politicians won their elections, which never came even after all the flags and banners have long gone.

Piqued by the activity next door, Abdul Rashid’s sister, Absah Abdul Malik, walked over to introduce herself, before recounting the broken promises she has collected.

These included wood and concrete to help rebuild their homes, to corrugated roofing sheets to keep the rain out, all in return for their support in elections.

Misty eyed, Absah recounted the sleepless nights their entire family spent huddled outside their homes before dawn, fearful of being washed away by rising waters.

“Every time there is a high tide, we all wait outside in front of our house even at 4am because we simply cannot sleep and need to be cautious the whole night,” she said.

Absah also disclosed that she once volunteered for the campaign of a political party she did not want to name, campaigning for it, and was rewarded with only promises.

Absah Abdul Malik speaks to Malay Mail about being marginalised by the politicians which caused her to suffer greatly. — Picture by Farhan Najib

“What did I do to deserve this? All my friends that worked at the district polling centre got their slice, but here I am sitting at the porch of my house hoping one day that I could taste whatever’s left on the plate,” she added.

Muhammad Haidi told Malay Mail their family living in four adjacent houses were the only Malay fishermen in the village that was primarily ethnic Chinese, but said they have always been harmonious.

Back in town, a group of senior citizens sat around a street vendor selling sugarcane water and fruits.

Among them was a 73-year-old retired civil servant, Pak Mokhtar, who launched into an unprompted tirade about the country’s politics and the state of Bagan Datuk.

While he was grateful for what political leaders have done for the constituency, he said it still lacked basic infrastructure and amenities.

“When we talk about development here in Bagan Datuk, I’m not talking about skyscrapers or fancy buildings. I just want basic things like a bank and a petrol station to be built within this area and that would be enough for us here,” he told Malay Mail.

Still, it was not entirely discontent in Bagan Datuk. An 81-year-old man operating a stall selling banana fritters said he would not want to see a repeat of Pakatan Harapan’s 22 months in power.

Instead, he said that he will vote for someone pious and who did not slander their opponents.

“I want someone that came from a really religious background, like Datuk Zahid. Plus, he did not talk about his opponent’s weakness or failings during his campaign.

“I would like to have a leader like him and I don’t care what other people say about his court cases because that is between him and Allah,” he told Malay Mail.

To make matters worse for Ahmad Zahid, the Pakatan Harapan coalition has sent in their so-called giant slayer, Datuk Shamsul Iskandar Md Akin, after the Umno president for another upset.

Shamsul believed he was not being sent into the lion’s den naked. Instead, he said he thought himself armed with a possible swing in the constituency’s Indian vote as well as the roughly 15,000 new voters added courtesy of Undi18 and automatic voter registration.

The incumbent Hang Tuah Jaya MP believed the apparent neglect of Bagan Datuk would allow him to appeal to its resident with pledges such as to finally establish a municipal council of its own, eight years after officially achieving district status in Perak.

At the moment, it still depended on the Teluk Intan Municipal Council for services.

“When I asked the people of Bagan Datuk how many times the municipal council picks up your trash and they told me it was only once a week. That’s why the first thing I want to do if I become the MP of Bagan Datuk is to have a clean district, not just a clean MP,” he said.

Previously, Ahmad Zahid sought to blame PH for the drop in funding for the constituency, alleging that it slashed a previous allocation of RM4.3 billion to just RM900 million in 2018.