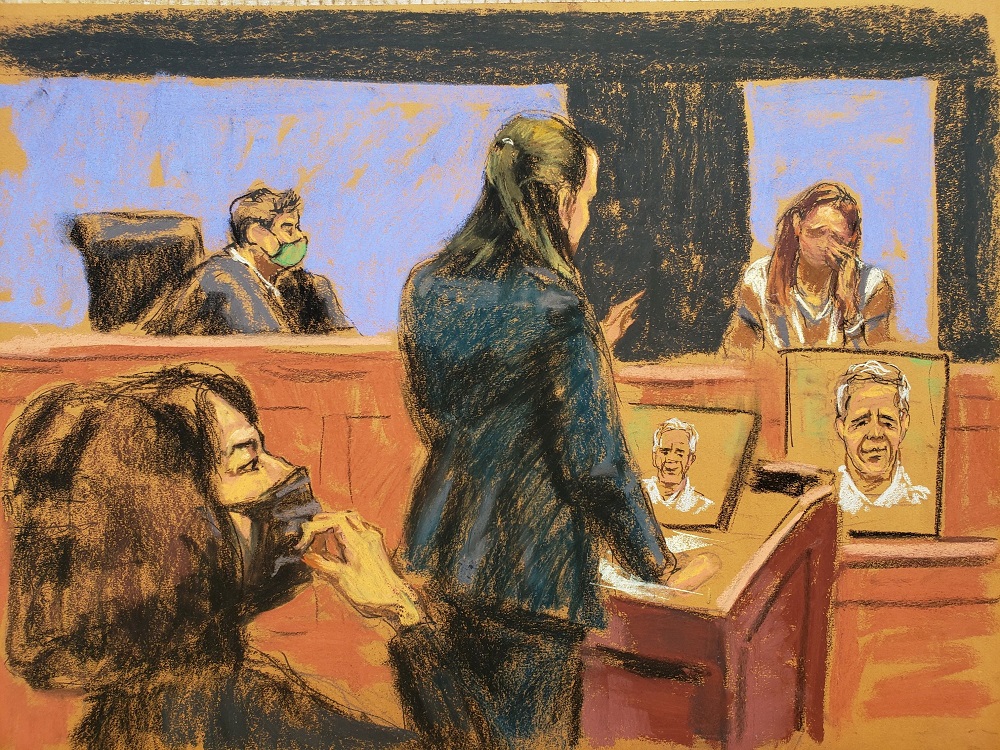 NEW YORK, Dec 8 — A woman whose accusations underlie the criminal sex trafficking case against Ghislaine Maxwell testified yesterday that she told the British socialite she was 14 before giving financier Jeffrey Epstein a sexual massage at his home.

“Something sexual happened every single time,” Carolyn, who chose not to reveal her last name, told jurors in Manhattan federal court.

Carolyn is the third woman who said she was abused by Epstein to testify for the prosecution at Maxwell’s sex abuse trial, which began last week and is expected to last into mid-January.

Maxwell, 59, is accused of recruiting and grooming teenage girls for Epstein, her onetime employer and boyfriend, and has pleaded not guilty to eight counts of sex trafficking and other charges.

Lawyers for Maxwell have said that her accusers’ memories have been corrupted over time, and that she is being scapegoated for Epstein’s alleged crimes because he is no longer alive.

Jurors last week heard from Jane, a pseudonym for a woman now in her early 40s who said she was first abused by Epstein while she was 14 in the mid-1990s.

Another woman cited in the indictment as a minor victim, known as Kate, testified on Monday that she Epstein first abused her when she was 17. US District Judge Alison Nathan instructed jurors that Kate had been above the age of consent.

Jane and Kate testified that they had been aspiring entertainers who said Maxwell told them Epstein could help them advance their careers.

She testified about a difficult upbringing, saying her mother was a drug user and alcoholic and her grandfather sexually abused her when she was four. Carolyn also said she became a cocaine addict, and dropped out of school in the seventh grade.

Now in her mid-30s, Carolyn said she was introduced to Epstein in 2002 by Virginia Giuffre, one of Epstein’s and Maxwell’s most prominent accusers, who asked her “if I wanted to go make money.”

Carolyn said Giuffre, then known as Virginia Roberts, brought her to Epstein’s house in Palm Beach, Florida, where the pair were greeted by Maxwell.

She recalled helping Giuffre massage Epstein for about 45 minutes, and looking on after Epstein turned over and began having sex with Giuffre. Carolyn said three US$100 bills were left for her on a bathroom sink.

Giuffre has said in civil lawsuits that Epstein and Maxwell trafficked her while she was a teenager. She is not expected to testify at Maxwell’s criminal trial.

Carolyn said she returned to Epstein’s home after the initial encounter with him and Giuffre because she needed money to buy drugs.

She said Maxwell would sometimes call her to schedule appointments, and that Maxwell once invited her to travel to an island.

“I told her that I was too young and there was no way in hell my mom was going to let me leave the country,” Carolyn said, adding that her mom was usually not strict about her behaviour. “I told her I was 14.”

She did not specify the island. Epstein owned islands in the US Virgin Islands.

Carolyn also said Maxwell once touched her while she was preparing to massage Epstein.

“I was fully nude and she came in and she felt my boobs and my hips and my buttocks and said that…I had a great body for Mr. Epstein and his friends,” Carolyn said.

Epstein, who counted chief executives and heads of state among his associates, killed himself in 2019 at the age of 66 in a Manhattan jail cell while awaiting sex trafficking charges.

Also yesterday, prosecutors showed the jury photographs depicting what they called his intimate relationship with Maxwell, including Maxwell massaging Epstein’s foot while it was pressed against her chest. — Reuters