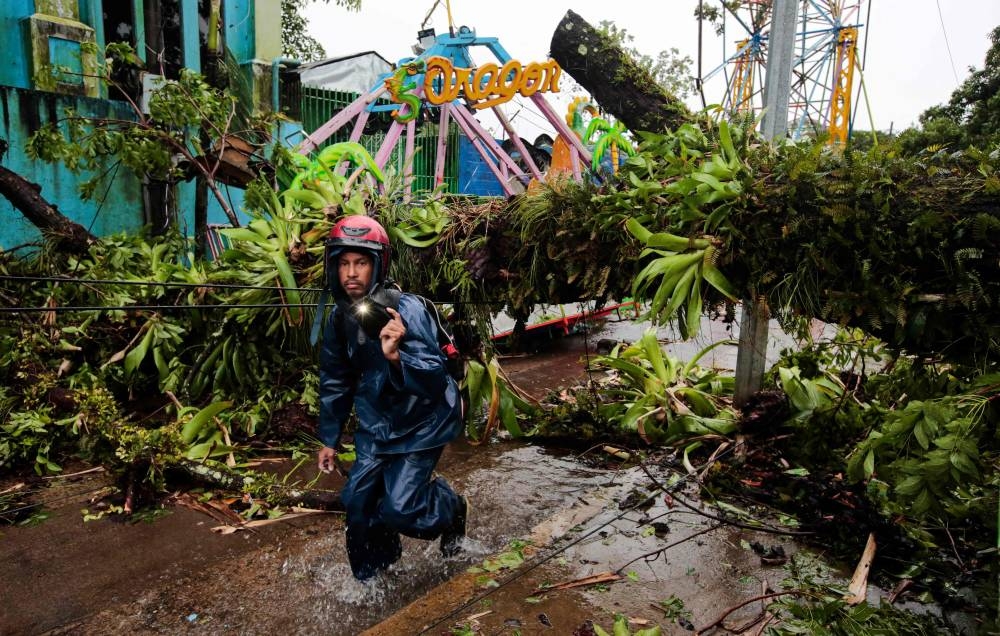 A man walks amid fallen trees following the passage of Hurricane Julia in the town of Bluefields, on the Caribbean coast of Nicaragua on October 9, 2022. — AFP pic

BLUEFIELDS (Nicaragua), Oct 10 — Hurricane Julia raked across Nicaragua Sunday, lashing the country with winds and heavy rain and bringing potentially life-threatening flash flooding and mudslides to much of Central America and southern Mexico.

Maximum sustained winds were estimated at 85 miles (140 kilometers) per hour when the storm made landfall near the Laguna de Perlas area at 0715 GMT, the country’s weather agency said.

By midday, the fifth Atlantic hurricane of the season had weakened to a tropical storm with top sustained winds at nearly 60 miles per hour as it churned westward across Nicaragua, unleashing a dangerous storm surge along the coast, damaging homes in the country’s interior and leaving some towns incommunicado.

“It’s still raining, water has surrounded us, we have been without power and water since early morning, several houses are without roofs and many trees are down on the road,” Julio Hernandez, a resident of Rio Blanco, in central Nicaragua, told AFP.

The country was on high alert, with civil defence brigades helping to clear fallen trees from roads and watch for flooding in coastal towns and mountain villages. No fatalities have been reported.

But the US National Hurricane Center warned that Julia, whose center was just 20 miles northeast of Managua at 1800 GMT as it battered the capital with wind and rain, was still packing a punch, not just for Nicaragua but for neighbouring countries.

“This rainfall may cause life-threatening flash floods and mudslides across Central America today and Monday,” with dangerous conditions also reaching southern Mexico, the NHC said in its latest advisory.

‘We have to prepare’

Maintaining its tropical storm strength, Julia is forecast to produce five to 10 inches (12.7 to 25.4 centimeters) of rain in Nicaragua and El Salvador, with isolated pockets receiving as much as 15 inches.

Hours earlier in Bluefields, Nicaragua, one of the main coastal towns buffeted by the storm, fishermen had been busy safeguarding their boats as people rushed to buy groceries and withdraw money from ATMs.

Hurricane-force winds and heavy rains began to be felt around midnight, according to AFP photographers in the city, while reports detailed detached roofs, fallen trees and power outages.

Before reaching Nicaragua, Julia passed over a trio of Colombian islands, an environment ministry official told AFP, causing rain and lightning in the country’s north.

Julia was a Category 1 hurricane, on the low side of the five-tier Saffir-Simpson wind scale, when it roared ashore in Nicaragua.

Authorities have evacuated some 6,000 people in Laguna de Perlas, in the Miskito keys located off the coast, and in other zones, and dozens of storm shelters were set up in schools.

“We have to prepare with food, plastic, a little bit of everything, because we don’t know what’s going to happen,” Javier Duarte, a cabinetmaker in Bluefields, told AFP.

The municipality of some 60,000 inhabitants has many flimsy structures. By mid-morning, telephone communications were knocked out.

Julia’s arrival in Central America comes less than two weeks after deadly Hurricane Ian crashed into the southeastern US state of Florida, in one of the most powerful US hurricanes on record.

The Category 4 storm flattened entire neighbourhoods on the Sunshine State’s southwest coast. More than 100 people were killed, according to US media.

Climate change is increasing the temperature of ocean surface layers, which generates more powerful and wetter storms, according to experts. — AFP