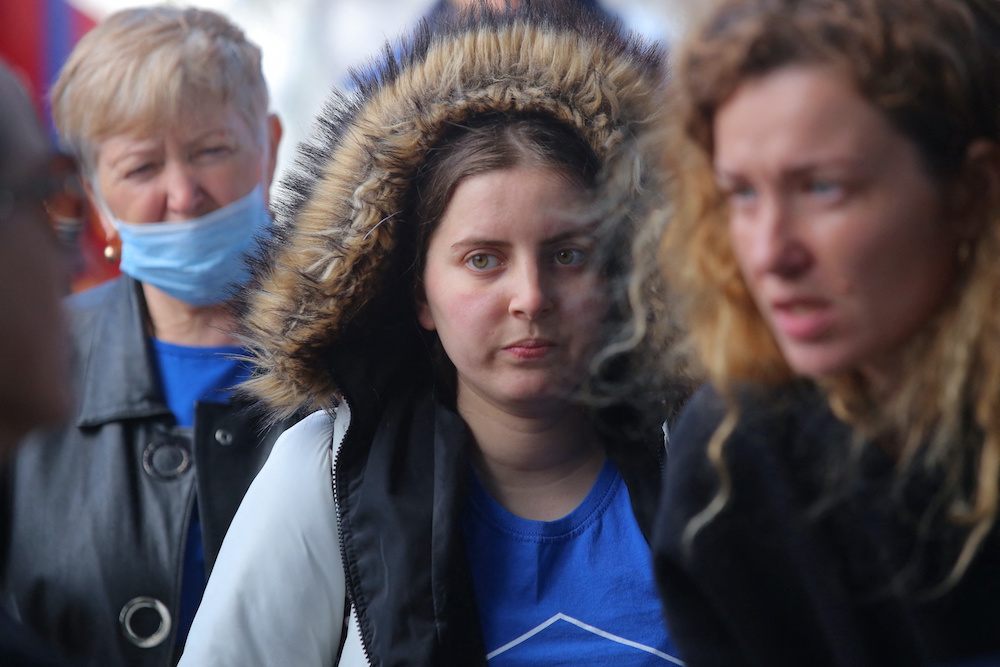 Ukrainian women seeking asylum in the United States wait in line to board a bus outside the Benito Juarez sports complex, set up as a shelter by the local government in Tijuana, Mexico April 22, 2022. — Reuters pic

ZAPORIZHZHIA, Ukraine, Apr 23 — Hopes for a weekend truce in Ukraine to celebrate the Orthodox Easter faded with talks between Moscow and Kyiv stalled as Russia said it aimed to take full control over the east and south of its neighbour.

The war enters its third month tomorrow but a senior Russian military officer said “the second phase of the special operation” — as Moscow terms its invasion of Ukraine — had just begun.

“One of the tasks of the Russian army is to establish full control over the Donbas and southern Ukraine,” Major General Rustam Minnekaev said today.

Russian forces, which withdrew from around Kyiv and the north of Ukraine after being frustrated in their attempts to take over the capital, already occupy much of the eastern Donbas region and the south.

Minnekaev said their focus was now to “provide a land corridor to Crimea,” which Russia annexed in 2014, and towards a breakaway pro-Russian region of Moldova, Transnistria, where the general claimed Russian-speaking people were “being oppressed”.

Ukrainian authorities have vowed to fight on and drive the Russian troops from their land, but they also sought an Easter pause.

In his regular Friday night address, Zelensky said the Russian general’s comments were a clear articulation of Moscow’s goals.

“This only confirms what I have already said multiple times: Russia’s invasion of Ukraine was intended only as a beginning,” he said.

“We will defend ourselves as long as possible… but all the nations who, like us, believe in the victory of life over death must fight with us.”

Ukraine’s government, emboldened by an influx of Western weaponry, said its beleaguered forces were still holding out inside a sprawling steelworks in the razed port city of Mariupol.

The Kremlin has claimed the “liberation” of Mariupol, which is pivotal to its war plans nearly two months after President Vladimir Putin ordered the shock invasion of Russia’s Western-leaning neighbour.

In a phone call to Putin, EU chief Charles Michel appealed for humanitarian access to Mariupol, which has been largely destroyed by weeks of intense Russian bombardment.

“Strongly urged for immediate humanitarian access and safe passage from Mariupol and other besieged cities all the more on the occasion of Orthodox Easter,” Michel tweeted.

Putin however accused Kyiv of refusing to allow its troops to surrender in Mariupol.

“All servicemen of the Ukrainian armed forces, militants of the national battalions and foreign mercenaries who laid down their arms are guaranteed life,” Putin told Michel, the Kremlin said.

“But the Kyiv regime is not allowing for this opportunity to be used.”

Ukraine says hundreds of its forces and civilians are holed up inside the sprawling Azovstal steel plant in Mariupol, and Kyiv has repeatedly called for a ceasefire to allow women, children and the elderly to safely exit the shattered city.

“The enemy’s offensive operation in the south hinges on Mariupol. The enemy is trying to focus all its efforts on it,” Pavlo Kyrylenko, governor of the eastern region of Donetsk, told AFP.

An aide to Zelensky, Oleksiy Arestovych, vowed late Friday that Ukraine’s “counter-attack on Mariupol will be 101 percent” as soon as the general staff decides, according to Ukrainian media.

The flag ship of Russia’s Black Sea fleet which played a key role in the siege of Mariupol sank last week, with Kyiv and Washington saying it was hit by Ukrainian missiles, which Moscow denies.

In its first admission of losses following the sinking of the missile cruiser Moskva, Russia said Friday one crew member died and 27 were missing, after earlier claiming all the crew were evacuated.

Moscow had previously refused to reveal any details about casualties despite calls from parents concerned about their missing children.

It has also intensified efforts to muzzle independent media and government critics at home.

Russia’s change of strategic focus to southern and eastern Ukraine saw invading forces leave behind a trail of indiscriminate destruction and civilian bodies around Kyiv, including in the commuter town of Bucha.

A United Nations mission to Bucha documented “the unlawful killing, including by summary execution, of some 50 civilians there”, the UN’s Office of the High Commissioner for Human Rights said.

The UN mission was sent on April 9, a week after an AFP team found bodies of people dressed in civilian clothing lining the streets of Bucha, after the town had been under Russian occupation for over a month.

Ukrainian officials say the bodies of more than 1,000 civilians have been retrieved from areas around Kyiv.

“But what we saw was hands tied behind the back, their legs tied and shot through the limbs and in the back of the head,” he told reporters.

On Thursday, US satellite imagery company Maxar released photos it assessed showed a “mass grave” on the northwestern edge of Mangush, west of Mariupol.

Prime Minister Boris Johnson announced Britain was joining other European countries in reopening its embassy in Kyiv, but he warned that the conflict could drag on until the end of next year.

Seeking a way to end the bloodshed, United Nations chief Antonio Guterres will meet Putin in Moscow next week, and could also visit Zelensky in Kyiv, the UN announced. — AFP