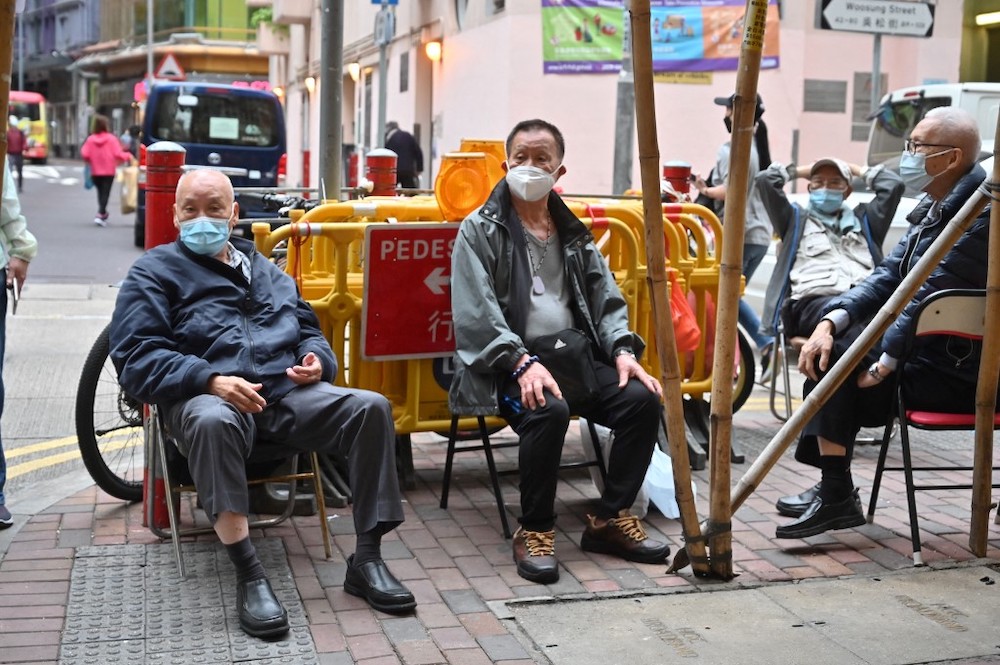 Still the draconian restrictions were unable to contain the coronavirus, and with more than 8,600 deaths of mostly elderly, unvaccinated people, many just in the past two months, Hong Kong’s citizens are reckoning with the costs of some of the world’s most stringent social distancing rules on their mental health and livelihoods.

Empty streets in the financial centre, shuttered restaurants and bars, and bare supermarket shelves are a testament to the disruptions Hong Kong’s Covid-19 rules wrought on its people.

Jacky Ip, 33, runs a Japanese sake bar in Kowloon across the harbour from the Central business district that used to stay open until 4am before the pandemic but has since been devastated by shifting restrictions on opening hours.

“We have lost a lot of money to a point that we almost need to shut down our business. Right now, it depends on the shareholders pooling money to see how long we can survive,” Ip said.

Many businesses across the city have been forced to shut, including gyms, restaurants, and bars, while others say they are living on borrowed time.

Ip complained that landlords have not adjusted rents in one of the world’s most expensive real estate markets to account for the business slump.

“The biggest cost is rent and we need to maintain the livelihood of our employees. It’s not fair. You tell us to stop our business, but you didn’t tell the landlord to stop charging us the rent.”

Beauty salon owner Lin Chan, 33, regrets that her nearly three-year-old son has had to wear a face mask since shortly after his birth and worries about his socialisation.

“He hasn’t been able to go to class. And now he is at nursery class level, he relies on Zoom. The parks outside are closed and he has few opportunities to meet friends and relatives and communicate. So his speech is developing rather slowly and he is scared of strangers,” she said.

Chan lives with her husband in a small apartment in the dense Kowloon neighbourhood and she said government rules that forced her salon to shut several times cut her family’s income.

“The government is constantly asking me to close it. And then I get to open for a few months. Just now I have had to close for four months. So the impact on our lives is really large. I hope things can quickly go back to normal, that we can get back our regular income, and that the kid can socialize.”

As the recent Covid-19 outbreak overwhelmed hospitals, medical staff worked around the clock to care for patients.

“Our colleagues are extremely busy. They didn’t have time to pee or drink water or even for their meal time.”

Lau said with space in emergency rooms so limited and with the shocking number of dead “you may need to occupy every waiting space for placing the dead bodies as well as our living patients.”

“Most colleagues have experienced that you may have performed CPR surrounded by dead bodies. It is very sad to see that.”

Authorities are due to start easing some of the restrictions from next week as the number of daily cases hovers below 2,000, but the damage will be difficult to reverse.

Hong Kong saw a net outflow of around 70,000 people in February and March, up from nearly 17,000 in December before the most recent wave hit, as many residents grew frustrated with the strict rules.

For those already outside Hong Kong, the border restrictions have added to the mental toll.

Beary Pang, 40, said his father passed away in March and three of his sisters who live overseas were unable to return for the funeral.

“Those who are overseas can only attend the funeral through video conferencing. We feel quite helpless. We only had one dad, but when the biggest thing happened, they couldn’t come back.”

“It’s quite hard to accept.” – Reuters