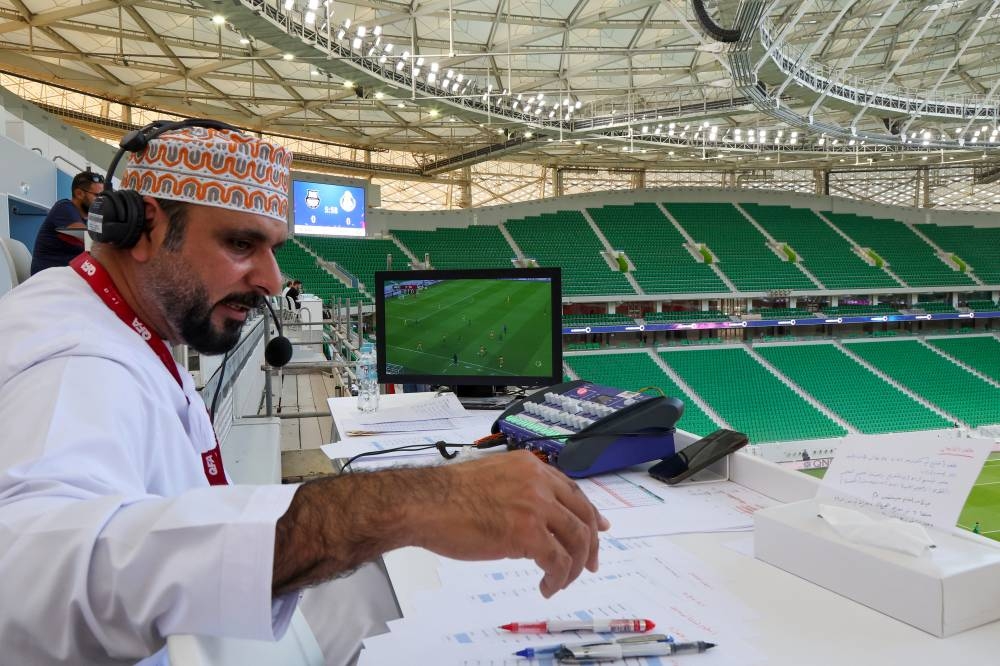 Omani Khalil al-Balushi, a commentator for the Qatari Alkass Sports Channels, is pictured during the Qatar Stars League (QSL) football match between Al-Gharafa and Al-Ahli at the Al-Thumama stadium in the capital Doha on August 31, 2022. — AFP pic

DOHA, Oct 10 — When a goal is scored in the Qatar Stars League, Khalil al-Balushi makes sure viewers feel the full force of the moment as he dials up the decibels to make their TV sets tremble.

“La-la-la-la-la!” he shouts after the ball hits the back of the net in one of Qatar’s World Cup stadiums.

Viewers of the Alkass sports channel might not see it, but sometimes the 42-year-old Balushi, one of Qatar’s top football commentators, dances a little jig in the press stand after a goal, pointing a celebratory finger towards the pitch.

Born in Oman and based in Qatar for 16 years, Balushi says all Arab football commentators — inspired by exuberant counterparts in Brazil and Argentina — “are a little bit noisy”.

In the Qatari heat, he tips back a bottle of water at half-time and a technician makes sure he has a constant flow of tissues to wipe his brow.

“Everyone knows me as this person, Khalil, with very high noise,” he said. “I will be at the same level for the World Cup.”

Qatari football will be different after the final on December 18, Balushi and others say — not least because of the US$6.5 billion (RM30.2 billion) spent on building and refurbishing the tournament’s eight stadiums.

Foreign oil workers brought football to Qatar in the 1940s, and some of the pitch lines were even drawn with oil.

The national team played its first game in 1970, and Qatar reached the final of the World Youth Championship in 1981.

After shocking many in 2010 by securing this year’s World Cup finals, the tiny Gulf state won the Asian Cup in 2019.

Since the 1990s, members of the royal family started pumping some of Qatar’s natural gas riches into local clubs, which now vie for the best domestic players and foreign stars.

“The quality of the players that they are bringing to the league is better,” Balushi said. “It is also helping to bring more fans to the stadiums.”

But “there is still a lot of difference in the football culture here and in Europe,” he added.

Clubs Al-Duhail — formerly known as Lekhwiya — and Al-Sadd have dominated the Qatar Stars League, winning 11 of the past 12 titles.

At the home grounds of club Al-Gharafa, a small army of Algerian workers cheers on a team that boasts several players from the North African country, including top international Yacine Brahimi.

Migrant workers also dominate at the Football Cafe, one of the rare Doha establishments devoted to sport.

Deterred by the Gulf state’s often searing temperatures, wealthy Qataris prefer to follow the matches from their luxurious homes.

With Qatari national players away preparing for the World Cup, Al-Sadd and Al-Duhail have stumbled, creating greater competition and bringing more people to matches.

“If my team can come close to a top place, I would be happy and I will take my family to support them,” Mohannadi said. “If they are losing, no one wants to go to the stadium.” — AFP