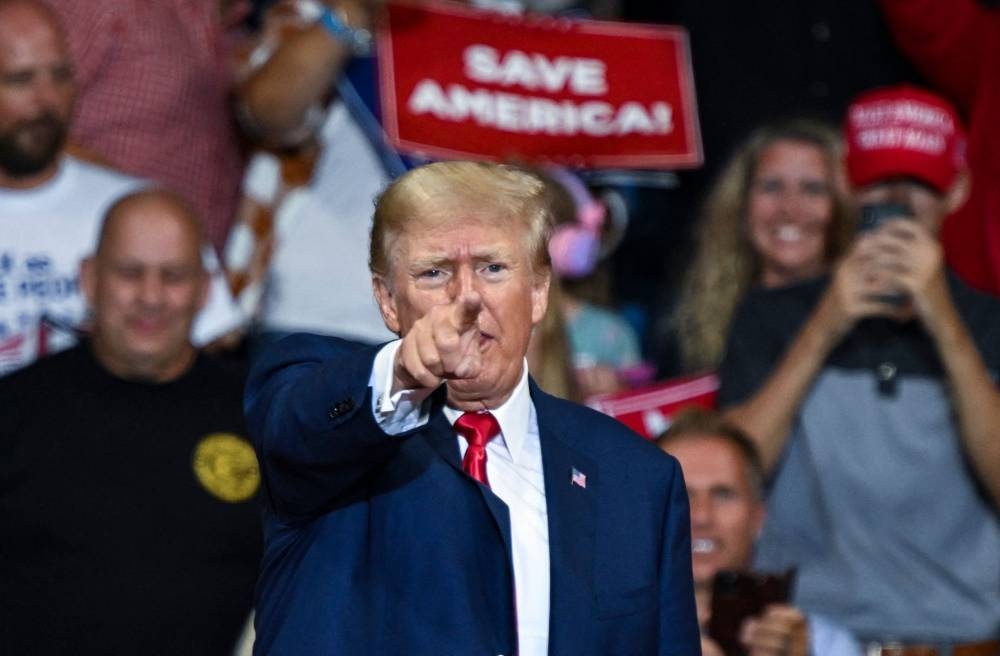 In this file photo former US President Donald Trump speaks during a campaign rally in support of Doug Mastriano for Governor of Pennsylvania and Mehmet Oz for US Senate at Mohegan Sun Arena in Wilkes-Barre, Pennsylvania September 3, 2022. — AFP pic

WASHINGTON, Oct 8 — After losing the 2020 presidential election, Donald Trump could have worked on his golf swing or produced another book by the pool at his south Florida beach club.

Instead he threw himself into the midterm election campaign with unprecedented gusto, staking his kingmaker reputation on a slew of controversial candidates in key primary races.

His US Senate picks in open races — mostly anti-abortion hardliners, backers of his election fraud conspiracy theories or out-of-towners with tenuous local ties — have been struggling however.

And with exactly a month to go until Election Day, many Republicans are laying the blame at the gates of Mar-a-Lago.

“Donald Trump is not on any ballot in 2022, but his political future is,” John Hudak, a senior fellow at the Brookings Institution, wrote in a recent blog post.

Trump’s project to reshape the Republican Party in his image via the midterms will likely “either make Donald Trump an also-ran or the commanding force in party politics for years to come,” Hudak argued.

Many of Trump’s primary endorsements have been seen as undermining more electable, mainstream alternatives, and potentially squandering easy victories in key battlegrounds seen as ripe for flipping from the Democrats.

Among his controversial picks are celebrity physician Mehmet Oz in Pennsylvania — seen by many as an out-of-touch “carpetbagger,” prone to rhetorical gaffes — and Ohio’s J.D. Vance, a venture capitalist who has spent most of his adult life in Silicon Valley and faces similar issues.

The story is the same in Georgia, where ex-football star Herschel Walker faces questions over domestic abuse, dishonesty about his past and mental fitness.

And in Arizona, Blake Masters is struggling in what should be a winnable seat with a campaign that Politico has described as “hardline nationalist.”

Senate Minority Leader Mitch McConnell — who needs just one gain to take the upper chamber from the Democrats — has offered oblique hints that he sees “candidate quality” as a problem.

“(If) Senate candidates like Walker, Oz, Vance or Blake Masters ultimately lose in numbers that maintains Democrats’ Senate majority, Trump will be widely blamed,” he said.

A poor election night for Trump candidates would be chum in the water for his 2024 rivals, a list that potentially includes outspoken anti-Trumpist Liz Cheney, Florida’s firebrand governor Ron DeSantis and ex-vice president Mike Pence.

Cheney aside, Republican presidential hopefuls have largely continued to genuflect to Trump through his post-presidency.

But figures such as ex-secretary of state Mike Pompeo, estranged Trump ally Chris Christie and one-time UN ambassador Nikki Haley could be emboldened by poor results on November 8.

David Greenberg, a media and history professor at Rutgers University, said the former president — for now the clear frontrunner for the 2024 Republican nomination — had “little to gain” in the midterms.

“But Trump has a lot to lose because if his candidates flame out, then he will be seen as having lost his magic,” Greenberg told AFP.

“Some primary voters in 2024 may think twice about supporting him again, especially if a popular alternative such as DeSantis also runs.”

A note of caution: the polls are expected to tighten before November and all of Trump’s most divisive candidates could yet triumph in photo finishes.

Expect some of the circling sharks to back off if this happens — and for Trump to look suddenly like a political genius with a bold vision rather than a liability.

Trump watchers often point out that much of the former president’s die-hard base cares little about the Senate or Washington politics in any case.

“Despite losing reelection, two impeachments, nearly a dozen serious criminal probes, and countless scandals that would have long ago sunk most any other politician, Trump remains the clear leader of the Republican Party,” said political analyst Nicholas Creel, of Georgia College and State University.

“Trump’s support in the Republican Party is far too resilient to be damaged by a poor showing by the party this November.”

Other observers though expect the tycoon’s many legal woes, including the mushrooming scandal over his mishandling of classified government secrets, to be as a big a drag on his political prospects as the performance of his midterm picks.

Irina Tsukerman, a New York-based national security lawyer and geopolitical analyst, said Trump was increasingly perceived as a “political liability” — incapable of winning a future presidential election even against a weak Democrat.

“Overall, it looks like he will be strongly discouraged from running in 2024, which he may not do for his own reasons — such as avoiding embarrassment and keeping the money he is currently raising,” she told AFP.

Trump’s office did not respond to a request for comment. — AFP