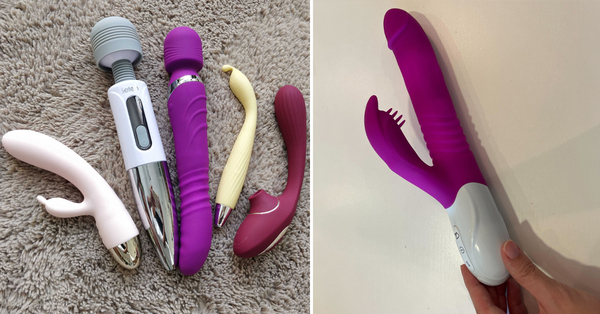 Talking about sex should not be a taboo topic in Malaysia.

Fortunately, there are plenty of ways to spice things up in the bedroom and they’re more accessible than ever.

With so many available options out there, it can feel a little intimidating if you’re not sure of what to get.

There are three types of vibrators on this list: external, internal, and dual stimulation.

Dual stimulation – Stimulates external and internal at the same time.

We break down several types of vibrators that are available in Malaysia, and how they differ from each other, so you can pick the one that best suits your needs.

We included a few of our reviews in this list as well, so you get a better idea of how they work.

This wand’s head has slight flexibility; allowing you to manipulate it to your own preferences.

Review: There are different vibration settings on this, so it does provide for a variety of preference, I think. It would be fun if someone else manoeuvred it for me ’cause of the ‘unpredictability’. When I was using it on myself, it was a nice feeling but I felt like I could climax a lot easier by just using my hands. Overall, it could just take some getting used to on my own, but it is fun for foreplay with a partner.

Some people say that suction vibrators tend to mimic the sensation of oral sex. With this one, you can choose multiple intensity modes that allow you to personalise the experience to your body’s needs.

I would recommend this for fun foreplay with a partner. I wasn’t able to achieve an orgasm with just the rose itself, but it made for really fun foreplay and extra stimulation when penetration was involved. FYI, you can also use it on other body parts like your nipples to make your sexscapade more sensational.

During sexy time with the husband, we tried missionary with my legs over his shoulders so the vibe could do its thing while he did his thing. However, I couldn’t stop giggling because of the sounds it was making (plus it wasn’t really doing much for me) so we ditched it after a few minutes. Perhaps a better position would be face down doggy. All in all, it’s a fun lil addition to your foreplay routine, whether alone or with a partner. But if you’re looking for a quick, easy way to reach climax, this isn’t the vibe for you.

If you don’t know where your G-spot is (don’t worry, you’re not alone), these toys come in handy for anyone to play around with. Your G-spot is basically the cluster of nerves on the internal front of your vaginal wall.

Thrusting vibrators, as their name suggests, are meant for thrusting motions. While general buzzing vibrators are mainly for external stimulation, these are made to penetrate and can move themselves rather than needing someone to control the thrusting.

Depending on the type you get, these parts can be used simultaneously or separately.

Review (dark pink): I loved that this was a vibrator for both internal pleasure and external clitoral stimulation at the same time. It has an extensive range of settings, with different speeds and vibration patterns that you can change the shaft and the ‘rabbit ears’ to. It was easy to use, and the silicone material is also comfortable, sturdy, and easy to clean. The only problem I had was that it’s too noisy and I’m sure people in the next room would be able to hear if I wasn’t discreet. Would still recommend it to a friend, but maybe find a model that is a little smaller and quieter.

You can get them here.

We didn’t list them all, but there are plenty more vibrators available. You can find them at Vaib Store here.

More than just condoms, Malaysia has all these different types of birth control:

For #sexualhealth articles on SAYS: