“Her Sister Is Much Prettier” — Malaysian Man Fantasises Being With His Fianc?’s Sister 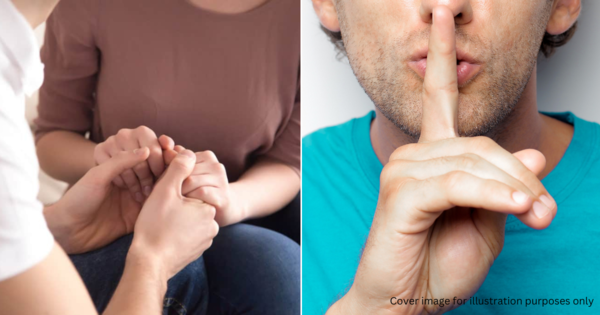 Relationship issues aren’t uncommon, especially when a couple is getting ready to walk down the aisle.

But what happens when the primary issue is your partner having a thing for — wait for it — your sibling!

A recent confession made by an anonymous man to the Twitter page, Emosi, which frequents questions posed by unnamed individuals as a means to resolve their personal issues, has gone viral for the sheer audacity of the whole situation.

The screenshot of the confession is shared alongside a caption which reads, in translation, “Falling in love with your girlfriend’s younger sister because she’s three times prettier than her.”

Properly encompassing the entire situation, the confessor seeks out advice from the public on what to do, as he realised soon after meeting the family of his fianc? that the one he’s truly attracted to, was her sister.

Image for illustration purposes only.
Image via LoveDevani

In the opening of his post, the man shares how after being together for two years, he and his girlfriend decided that it was the right time to get engaged

Shortly after, the confessor explains how he frequented his fianc?’s house to get to know her parents and siblings better — until something happened.

“I froze the moment I saw her younger sister. I swear, she’s super pretty, like three times prettier than my girlfriend!”

The man then goes on to detail the rut he’s currently in, with no idea how to move forward with his fianc?. “I love my girl but damn her sister is so beautiful. Now I always miss her sister more, I don’t know what to do. It feels like I’m cheating but I don’t make any moves on her. It’s all in my head.”

He conclusively ends his confession by asking advice from the public as to what he should do.

Image for illustration purposes only.
Image via Andrea Piacquadio/Pexels

Getting smeared left, right, and centre by the general Twitter audience, the man was heavily criticised for his confession

One user wrote, “Just break up with your girlfriend. After that, don’t ever plan to make a return to that family. I can’t believe you can even think about ruining your relationship with your potential sister-in-law. You’re definitely not handsome if you have an attitude like this.”

Another user wrote, somewhat taking a knock at the man’s confession, “He should be grateful that his girlfriend is dating him since her siblings are three times better looking than him!”

A few other users poked fun at the confessor, with one person writing, “Now you’ve just been to your fianc?’s house, you haven’t been to a different state yet? There will be girls 10 times prettier than her, you’ll forget yourself.”

One more user said that the man is not ready for a relationship, saying that he’ll fall in a love with any random person he sees moving forward. “It can’t be that every single time he meets someone pretty, he’ll fall in love. I pity his poor fianc?.”

Nonetheless, a few others asked the boy to consider the way he views life and relationships

One person wrote, “In this world, it will never be enough. First your girlfriend is pretty, then her sister is prettier — so when you find someone else, will you continue this cycle again? You have to learn to cherish your person, good looks does not guarantee anything.”

Another person told the confessor that he’s clearly not ready for marriage, because he doesn’t truly understand the loyalty that comes with it.

“If you don’t change yourself, you will never find the right person who will stand by you. That is just her younger sister! Imagine if you get married, and you find a lot of other women who are prettier than your wife. What would you do then?”

Another man expressed his frustration over his wife’s weight gain after having their first child:

One woman is contemplating divorcing her husband due to his filthy lifestyle: