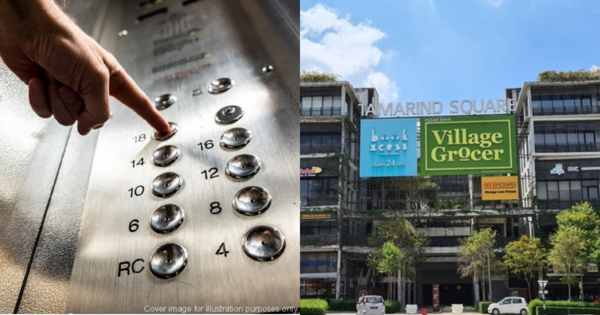 Disclaimer: This story contains explicit and pornographic details that may be distressing to some readers.

On 9 November, the woman was walking around the upscale retail hub when she entered a lift at Block E3. Unbeknownst to her, she was being followed by a man who trailed her into the elevator.

As the two stood close within the small space together, the woman realised to her horror that the man was touching himself inappropriately.

According to the victim, the man “stepped closer whilst scanning [her] body the entire time.” She added chillingly, “You won’t know how it feels until it happens to you.”

Image via Eris Goes To

As soon as the doors opened, she quickly exited the lift and ran to Seri Spa, which was located directly opposite. Luckily, a guard was standing nearby.

She quickly explained what had happened to her, whereupon the guard immediately chased after the culprit.

Thankfully, the flasher was promptly apprehended and brought straight to the Tamarind Square security team, where the woman was asked to verify his identity.

Upon confirming that they had apprehended the correct person, the alleged offender denied the charges against him, claiming, “I didn’t do anything, she’s lying.”

“Why would I lie about being flashed?” the woman demanded. Realising he was cornered, the offender finally folded.

According to the woman, the man got down on his knees and begged to be pardoned. “Please, I’m still a student, kak,” he said, “Please, kak, I promise I won’t do it again.”

The Tamarind Square security guards suggested letting the student off with a warning by calling his parents and explaining what had happened, instead of filing a police report against him.

The woman refused, choosing instead to lodge a report that same night. After she left, however, the security guard took down the suspect’s details before releasing him.

Authorities are now investigating surveillance footage from the time of the occurrence.

According to the statement, the management claimed that, “As the victim was still in shock, she took some time to decide [if she would like to file a police report]. While waiting for the victim’s decision, the suspect was held in the security control room.”

It went on to say that, after several hours of waiting, the woman did not inform them of her decision. “To avoid a case of unlawful restraint, the security team took down the suspect’s personal information and a copy of his identification card before releasing him,” they continued, claiming that the suspect’s details have been provided to the Cyberjaya police.

The victim contested their statement, however, arguing that confirmation of her decision was not sought by anyone from Tamarind Square’s management

The victim also urged other women walking alone in public spaces to be careful, regardless of how safe an area may appear to be

“Regardless of how bright [and] open the space is, please be extra careful, especially if you’re walking alone,” she warned.

She also laments the fact that women are required to bear the burden of staying hyperaware in public spaces due to the ever-present danger of being attacked, sexually harassed, or sexually assaulted.

“I’ve always love[d] going to [Tamarind Square]. But knowing [that] women can’t feel safe taking a lift alone is sad. I’m sad I wasn’t extra-careful. I’m sad I didn’t [realise I was] being followed,” she said.

If you or someone you know may be at risk or has experienced sexual abuse or assault, please reach out to these Malaysian organisations: