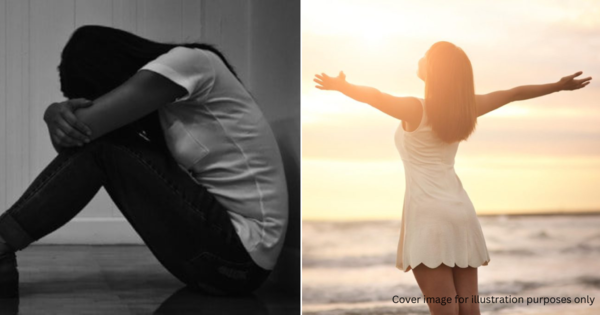 While the world can often be a dark and rather cruel place, we all know where we can find true and unconditional love — our parents

Shielding us from every storm and fighting all the terrors that come our way, most of us have come to see our parents as a stable constant, who will protect us at every instance. But what happens to the children who grew up in a household where this was not the case?

A recent confession made to the Malaysian Twitter page, Emosi, revealed a series of events that lasted decades. Heartbreaking every step of the way, one unnamed woman decided to share the story of her life when she lived with her mother, father, and siblings. Unfortunately, it was not all sunshine and roses, as she recalls the abuse her father put her entire family through constantly.

Detailing instances tough to swallow for any user, his recent death pushed her to share how her family will be okay, and will find happiness in their futures moving forward without him.

Image for illustration purposes only.
Image via The Power Moves

The woman begins her story by explaining her father’s nature, as someone who was always fierce, and who got angry at the drop of a dime

Coming from a family of six, the woman mentioned how, as the youngest in her family, the age gap between her and her siblings was fairly big.

She then begins by touching upon how hot-headed he was. “He would lose his temper so bad. If we’d have dinner a tad bit later than usual, he’d go off on my mother. He’d call her lazy, useless, and unfit to take care of him.”

Eluding to how sinister the situation had become, she explained how the house would always be quiet if he was at home. “We grew up in fear. We couldn’t make any noise, we couldn’t play. If he’d go out, we’d feel like life came back into the house. We’d be laughing with our mother and we were happy that he wasn’t at home.”

Image for illustration purposes only.
Image via Ketut Subiyanto/Pexels

“He started choking him, and he couldn’t breathe”

As her siblings got older, they learnt how to start talking back to their father, and stopped taking his aggressive behaviour towards them.

“They’d yell at each other to the point of a screaming match. But during one fight, my dad grabbed my brother by his neck. He started choking him, and he couldn’t breathe. But my brother didn’t respond or react. He waited for my dad to let go of him. After that, he ran away and didn’t come home for years. He just couldn’t take it anymore,” she vented.

As time went on, she expressed how all her siblings have gotten jobs and moved out of the house, including herself. “I don’t think long when it comes to going out, I always do,” she explained about her social life.

However, one person they all cared for was still facing the brunt of her father’s abuse — their mother. “We’ve all countlessly invited her to stay with us, move out of that house. But she refuses, she wants to take care of our dad. We’re all sad, because we know she probably gets scolded by him, daily.”

Image for illustration purposes only.
Image via Andrea Piacquadio/Pexels

Years down the line, the woman recalls how her mother called to inform her of her father’s illness — and how she wasn’t motivated to visit him at all

“Not long after that, he passed. So we did what was expected of us — we went home and organised everything in relation to his passing. Ironically, it was fasting month when he died, and Hari Raya Aidilfitri was in two days,” she explained.

However, the woman expressed how she saw an instantaneous change after her father died, a change that was for the betterment of her entire family.

“For the first time in our lives, we turned on the twinkling lights outside of our house. We turned on the lamps, and the house was filled with laughter of children and our relatives alike. Mum was so happy playing with the grandchildren.

“There was no longer a need to hold back our laughs, no need to keep quiet, no more abuse in the house. We were happy. This was the first time we were happily celebrating Hari Raya,” she detailed.

Image for illustration purposes only.
Image via Oh Bulan!

“It was a voice we hadn’t heard in years, a voice we’d almost forgotten”

After completing their prayers, the woman states how the whole family sat down for a glorious Hari Raya dinner, until a greeting from someone at the door grabbed everyone’s attention.

“It was a voice we hadn’t heard in years, a voice we’d almost forgotten. It was my brother. All [the] siblings ran up to him and hugged him. We were crying like kids, we didn’t need to hide it anymore,” she said, explaining how the story always makes her cry.

Since her father’s passing, the girl mentioned that she and her siblings frequent return home to the village to visit their mother.

Ending her post, she explains what her mother often gets up to now. “She doesn’t want to live in the city, she loves being in her village. She has her cat, her chickens, and her garden. She says that if she comes to the city, no one would take care of her anyways.”

Image for illustration purposes only.
Image via Perfect Livin

Hundreds of people poured out responses to the confession, sending kind words and strength to the woman

A plethora of commenters were in tears reading the post, uplifting the confessor and her family, specifically her mother.

“Her mother is so strong. May God bless her with plenty of goodness for withstanding all the pain for her children,” one wrote.

One commenter mentioned how the impact of abuse can trickle into the lives of so many others, affecting people in more than one way.

“This is so sad. We can all see what a short fuse does to a family; generations are affected and family members shy away from those who make them feel lousy.”

Multiple Twitter users, however, brought forward conversations relating to mental health, and how the confessor’s father may have had ailments that were unknown to him.

Another person attested to issues surrounding mental illness, saying that she felt the same way as the confessor did when her own mother passed away. “It was a long time before my soul felt rest.”

The most unfortunate part of the whole story, included some commenters who came forward to tell the stories of abuse they experienced at home

“This is exactly what happened to me. My father used to hit us all the time, and my older brother ran away too. As an adult, I’m now soft-spoken, though I do have a temper,” one man expressed.

Another woman had the opportunity to confront her father on the abuse he put her through as a child, and said their relationship is starting to heal.

“After talking to him, I found out my dad came from a broken home, too. His experiences made him this way. We recently found out that he has diagnosed Schizophrenia, too. I’m married and have migrated now, but I hope I get the chance to spend more time with him,” she admitted.

Nonetheless, one person’s tweet seemed to encompass the takeaway message all parents would hopefully learn from this story.

“Remember parents, this is a formula you can always use. Hot-headed and volatile parents can lose their children if they’re not careful.”

Asking for help is not a sign of weakness.

If you or anyone you know may be at risk of domestic violence or abuse, please call these Malaysian hotlines: