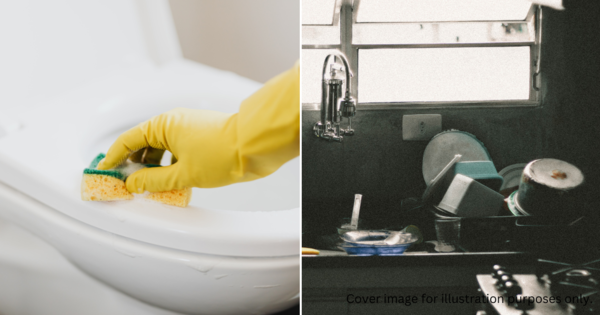 We all have deal breakers when it comes to relationships, but what happens when these intolerable traits come out late into your courtship?

A Malaysian confessions page on Twitter which goes by the handle @ConfessTweetMY, recently released a screenshot by an unknown woman disclosing how she is close to calling it quits with her husband due to his uncleanliness.

Pleading for help, the page shares a quick, yet detailed rant by the anonymous woman who is seeking help to fix her relationship.

Image for illustration purposes only.
Image via Wallace Chuck/Pexels

“I just got married two months ago, but now I regret it”

The title of the confession reads, “My husband is dirty.” To many people’s surprise, this was not the worst that there was to come.

Explaining her situation, the woman expounds on how after two months of marriage, she was surprised as to how dirty of an individual her husband is, going on to give examples of the rotten things he does around the house.

“He throws wet towels onto our mattress, pees on the toilet seat, and even spits his phlegm into the sink. I am so grossed out, do you understand? Sometimes, I don’t even talk to him because I am so angry,” she explains.

Ending her story, the woman then pleads for advice from readers as to how to advise her husband over these habits.

Image for illustration purposes only.
Image via Karolina Grabowska/Pexels

With over 5,000 retweets and 12,000 likes, the responses to this confession was not in short order

One commenter seemed to encapsulate what the majority of viewers felt on the inside: how could you not know this while you guys were dating?

“Okay, now you have to tell me how you didn’t pick up on your husband having dirty habits while you were dating, because this is a nightmare,” it read.

A few people offered some creative methods as to getting the problem solved. One cheeky person suggested getting a maid. “Ask him to clean up his own messes, and if he doesn’t want to, suggest getting and paying for a maid. One more thing, tell him to pee sitting down!”

Though less helpful to her current situation, another responder said that living together for the first time after marriage was a mistake within itself. “You should have tried living together for a short period of time before getting married. Only then will you discover his true behaviour.”

Nevertheless, whether in a brash manner or otherwise, the vast majority of Twitter users told the wife to be direct and communicate her feelings honestly with her husband to resolve her issue

“The key to a successful marriage is communication. Not talking about the matter doesn’t solve it. Mention what he does that you dislike and hopefully he will make improvements to change. Just remember to speak nicely,” said one person.

In a harsher manner, one more person said, “Just advice him on the matter?! You’ve been married for two months but you don’t know how to communicate with your partner. This is just another problem to add to your dirty husband.”

One responder offered a different yet insightful perspective, saying, “Not everyone’s upbringing is the same, but you need to be direct albeit teach him slowly. Don’t sulk and give up if you haven’t given it your all. Hopefully after showing and advising him, he changes.”

Would you put up with a dirty partner? Let us know!

We asked several married couples what they wish they knew before getting hitched: