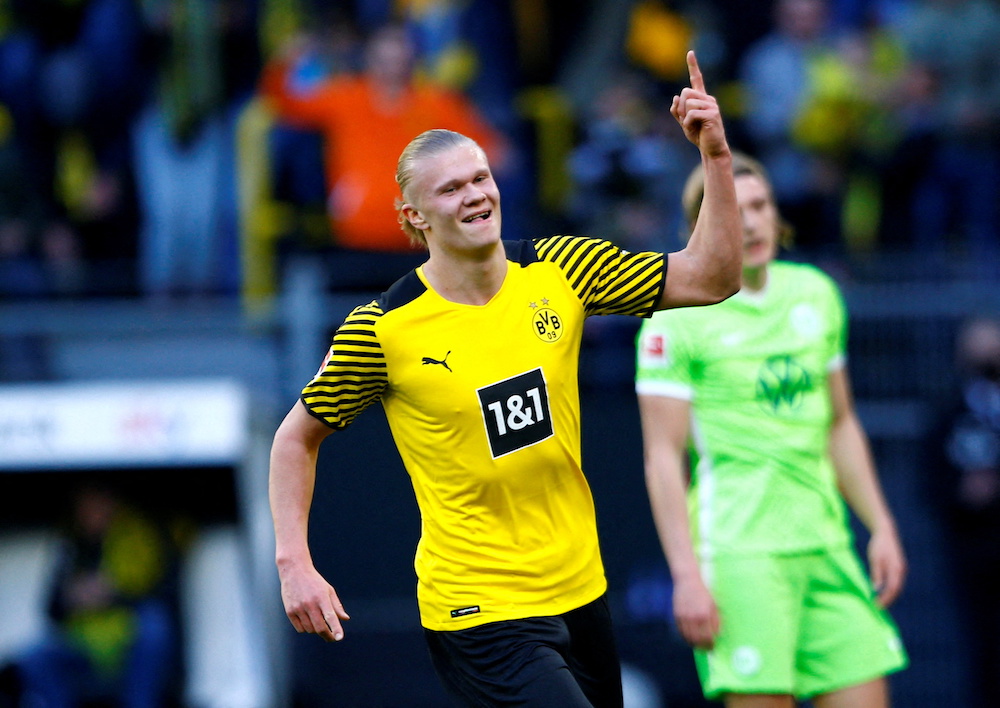 Haaland, 21, who is widely tipped to leave Dortmund at the end of the season, netted twice in emphatic style having drawn a blank in his previous five games.

Haaland’s performance was all the more impressive as he is carrying a leg injury.

“It’s getting better. He still has pain, but he showed today that he tolerates it well,” said Dortmund coach Marco Rose.

“It was a good performance by him in a good team display.”

The thumping win over mid-table Wolfsburg leaves second-placed Dortmund six points behind Bayern, who are away to Arminia Bielefeld on Sunday.

Bayern will be without France defender Lucas Hernandez and winger Kingsley Coman who missed training Saturday due to muscular problems.

Bayern, who exited the Champions League on Tuesday, are chasing a 10th straight Bundesliga title.

In spring sunshine, and in front of 79,200 fans at Signal Iduna Park, Dortmund turned on the style with five goals in a devastating 14-minute spell in the first half.

Tom Rothe, 17, marked a dream Bundesliga debut when the Germany Under-19 defender headed in Dortmund’s opening goal from a corner after 24 minutes.

The floodgates opened with four more goals in quick succession.

Axel Witsel fired under the feet of visiting goalkeeper Koen Casteels, Manuel Akanji tapped in a free-kick and Emre Can scored with a long-range shot.

The Wolfsburg defence was shredded again when Marco Reus served up a tap-in for Haaland, who applauded his team-mate after netting his first goal since late January.

It was the first time Dortmund held a 5-0 half-time league in Germany’s top flight since April 2013.

Reus, who claimed assists for Akanji and Haaland’s first goal, went close when he fired just over the crossbar.

Dortmund’s captain then linked with Julian Brandt to release Haaland, who hammered in his second goal to make it 6-0 after just 54 minutes.

Wolfsburg grabbed a late consolation when Ridle Baku fired in the rebound after Dortmund goalkeeper Gregor Kobel’s stunning save had denied Lukas Nmecha.

Veteran midfielder Kevin Prince-Boateng put in a commanding display as Hertha Berlin earned a 1-0 win at Augsburg to climb out of the bottom three.

Boateng, 35, bossed the midfield as Suat Serdar scored early in the second half to give Hertha only their second win in nine games.

Hertha’s win pushed VfB Stuttgart, who held Mainz to a goalless away draw, down into 16th, which carries a relegation play-off at the end of the season.

Freiburg stay in the fight for a Champions League place next season with a 3-0 home win over Bochum.

Freiburg are fifth, but only remain outside the top four on goal difference.

“It would be a dream (to play Champions League), we are very close and have to fight until the end,” said Freiburg winger Roland Sallai, who scored twice.

Bochum had Greek defender Konstantinos Stafylidis sent off for a dangerous tackle.

The visitors’ coach Thomas Reis was also shown a red card soon after for his overzealous protest and banished to the stands.

Cologne later won 3-1 at Borussia Moenchengladbach where veteran striker Anthony Modeste, 34, bagged his 75th goal on his 152 appearance for the visitors. — AFP