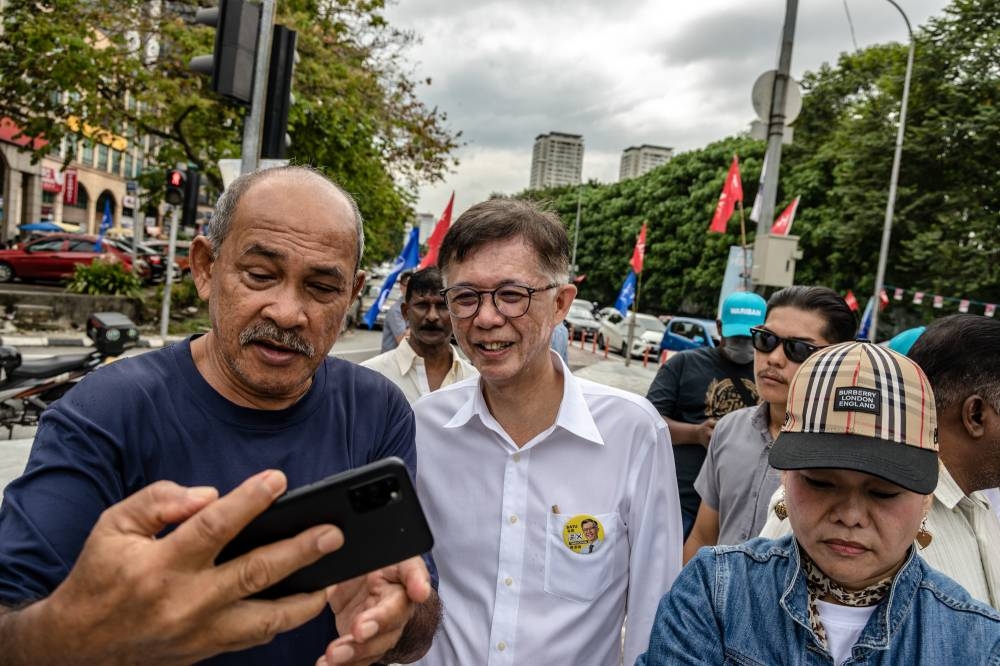 KUALA LUMPUR, Nov 14 — Former PKR vice-president Chua Tian Chang or Tian Chua is making his comeback in the Batu parliamentary seat where he had served as an MP in the past for 10 years, by using a distinctive yellow colour for his banners along with the simple symbol of a chair for ballot papers.

Chua decided to contest in Batu, even though his party PKR had already decided to pick his former protege P. Prabakaran to defend the parliamentary seat.

Going up as an independent candidate without the backing or resources of Pakatan Harapan (PH), Chua however did not appear worried about his chances when competing against Prabakaran and eight other rivals.

“I think the chances do not depend on how many candidates. I think the candidates just reflect there are a lot of people interested in Batu which is a good thing, I welcome that. And also means that people from various parties are concerned and willing to contribute to the development of the place, it’s a good thing.

“I think that’s something that needs to be celebrated, also at the same time, I hope candidates do not just come and go. After the election, they should come in together and let’s try to build this community together, I don’t mind,” he told Malay Mail.

“Yes, even if I win, I welcome them. We can sit down together and see from each political point of view, let’s work together to upgrade the welfare of the people in Batu.

“I came from that background because when I was contesting in 2004, I lost badly, it took me five years to continue working here, and finally I got support from the people in 2008,” he said.

Despite going solo, the number of yellow banners carrying a photo of Chua’s face and his “chair” symbol for GE15 appears to be able to match the number of banners of Prabakaran’s image. The colour yellow stands out from the sea of the predominantly blue, red and white flags or banners used by other candidates in Batu.

The yellow banners of Chua are bilingual, with one version stating “I’m back” along with a Tamil message, while another version has the Malay words “Tian Chua Kembali” paired with a similar message in Mandarin.

“I don’t have the party backing, but I got a lot of friends, supporters of my cause and they voluntarily coming out and we have a lot of volunteers who also come on their own accord to help me,” he said, adding that there are also people who have been donating for his campaign.

Tian Chua has also been distributing mini calendars with his face and his symbol of a ‘chair’ that will be used on the ballot papers, while his supporters had carried around actual mini yellow chairs and black-and-white cardboard printouts of a ‘chair’. — Picture from Facebook

Chua has also been distributing mini calendars with his face and his symbol of a “chair” that will be used on the ballot papers, while his supporters had carried around actual mini yellow chairs and black-and-white cardboard printouts of a “chair”.

He is also counting on voters’ recognition of him as compared to other candidates: “I think among all of them, I’m the familiar face, I’ve been here almost 20 years. From 2004 after I lost the election, I stayed, I maintained a service centre continuously, even after GE14 when I didn’t win, I still maintain a service centre here.”

Apart from Chua having an advantage via voters’ familiarity with him as compared to other “new faces” , he pointed out that voters too do not need to second guess whether he will fulfil his promises as he has a “track record” to prove it.

“People will be able to judge my track record, whether I just simply throw out my promise and whether it been fulfilled or not, so that’s the difference. So I don’t need to overly eager say ‘I will do this, I will do that’, I think people trust me that I have a strong track record. They know me, they seen me,” he said.

Chua said Batu residents still come to his office to follow up on cases that he had handled since his first two terms from 2008 to 2018, as many of these cases were still pending and yet to be completed until now.

Such cases include the developer YTL’s takeover of land which used to be Kampung Railway where KTM staff and their family lived, with Chua saying: “When YTL took over the land, the occupants were removed, I negotiated for their resettlement and also we negotiated for the compensation package. They are entitled to buy the new affordable houses and some of them will be given low-cost houses.

“So those cases until now are in my hands because we are still waiting for YTL to build it or rather for DBKL to continue to monitor the delivery, so the residents will from time to time check up on me and say what the progress is and how long do they have to wait. In fact, they were overdue, they were supposed to deliver in three years, but now it has gone past more than five to six years. So these are cases still in my hands, of course there are other issues,” he said, gesturing at land near the Sentul Raya shop lots as being where the now-demolished Kampung Railway was formerly located.

“It’s a bit like your family doctor, people come back to see me, even with new problems,” he said adding that these problems could include financial or family problems.

During the movement control order (MCO) or lockdowns for the Covid-19 pandemic, Chua said he helped deliver food in response to the #BenderaPutih initiative where those who needed food aid could put up white flags to ask for help without having to feel humiliated or ashamed.

“I managed to get people to donate and then we have a lot of white flags around, I have operation white ribbon to respond to the white flag, so a lot of people who live in flats had no food basically. That’s something quite disheartening, for me, somehow I never imagine in Malaysia you have people run out of food, they had no food to eat.

He said however that giving food aid is just a “band-aid” or temporary measure, noting: “Just do it for short while, then tomorrow they have no food. So the issues go beyond that, we need jobs, we need to create business opportunities, and we need social protection. I also think that we need to provide support for unemployment.

“Urban poverty is getting more and more serious and unfortunately I think the government is not putting enough attention into dealing with the phenomenon of urban poverty, because currently, the government approach is to set a poverty line, anyone above the poverty line is considered they are free of hardcore poverty,” he said, pointing out however that earning RM3,000 in Kuala Lumpur would be different from living in a more rural area with lesser income.

“So employment issues and urban poverty is catching up, and there is a lack of a comprehensive solution for that. Of course, this is not just one MP dealing with DBKL that can resolve. I would say if I were to be MP, I need commitment and political will from all political parties that we have to address the increased poverty problem,” he said.

While Chua was speaking to Malay Mail at the Sentul Raya shop lots, a Batu voter who was passing by stopped to ask him to help reduce the price of goods, saying: “It’s very important, very poor people all suffering, please ah, get price down.”

Tian Chua takes a selfie with a supporter during an election campaign in Sentul, November 11, 2022. — Picture by Firdaus Latif

What Tian Chua wants to do for Batu

If he wins in Batu, Chua says he would put out a draft proposal to redevelop the place to tap into the economic potential of its multiracial and multicultural heritage.

“There is a lot of potential for tourism, creative and cultural business-oriented opportunity, we need to highlight the specialty. And Batu is 50 per cent Malay, 30 per cent Chinese and less than 20 per cent Indian area, and I can tell you they have all denominations of churches here, all types of temples, mosques, some of them go up to 100 over years, all these are not highlighted,” he said.

“We need a comprehensive urban renewal plan, increased opportunity for people to get housing, improve the housing environment and solving some of the basic problems like lifts and shortage of houses, upgrading low-cost housing,” he added.

As to how he would address the housing issue in Batu if made an MP, Chua said he had previously objected to the government’s sale of land for any other purposes not linked to providing low-cost and medium-cost houses and will continue to fight on that.

“Last time, we have been opposing together, even with BN MPs, we oppose to the sale of DBKL land or state land for any other commercial purposes, but we should reserve it for housing,” he said.

He also listed three broad areas that would be important for the future and which would also affect Batu voters, including the government’s lack of attention to climate action to face the consequences of climate change such as rain and flooding.

“Although this may be the very, very cold topic, but this is still a planetary survival issue. This is an issue threatening humanity, better if all parties start thinking about it. Issues of carbon emission, green building, reduction of usage of car, so that is one aspect, one broad aspect,” he said.

“Second broad issue is social protection needs to be in place because of Covid-19, also because we have to look forward to the future. Malaysia suffered two major crises, one crisis is an aging society, and the other crisis is the crisis of stagnant productivity.

“And therefore for me, protection, social security for those people who are unemployed and the aging society is needed. Government must create funds for private sector pensioners to have some basic pension, government must provide protection for workers who had been retrenched,” he said.

“Third aspect is normally what we have been doing, I would say is opposition standard recipe — good governance, efficiency, transparency — which I have a track record speaking of it, so I won’t want to overpromise too many things. But for me, that would be my priority for my undertaking for the voters,” he said.

In the 15th general election (GE15), there are 113,863 registered voters in Batu, with 10 candidates jostling for the seat — the highest number of candidates in any parliamentary seat in Malaysia.