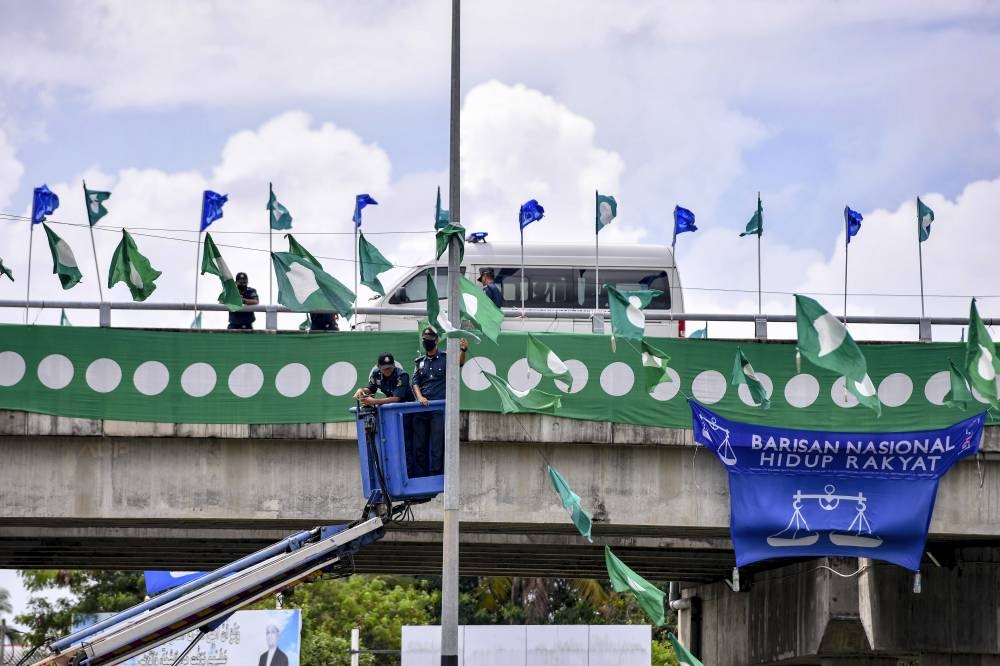 KUALA LUMPUR, Nov 11 — A lukewarm atmosphere is being felt in Terengganu and Melaka after almost a week of campaigning for the 15th general election (GE15).

Ceramah (political talks), especially those featuring big names in political parties, used to be a popular medium in Terengganu for campaigning every election season. However, thus far, the organisation of such a talk seems to attract poor attendance.

At a ceramah by a candidate who contested the Kuala Nerus parliamentary seat recently, only 20 attendees turned up.

“There used to be a lot of people (attending),” said a party official.

The situation is partly due to the GE15 candidates now also utilising social media platforms such as Facebook and TikTok for their campaign. PAS president, Tan Sri Abdul Hadi Awang, who will be contesting the Marang parliamentary seat, admitted that social media platforms are seen as closer to voters, and that political figures’ Facebook pages are constantly updated with various content.

Barisan Nasional (BN) candidate for Kuala Terengganu parliamentary seat, Datuk Mohd Zubir Embong, also uses social media sites such as Facebook and TikTok, among others, to interact directly with the people in his “Sek Awok Tanye, Cikgu Jawab“, a 30-minute session with his followers.

Meanwhile, in Melaka, the lack of “heavyweight” candidates, following political parties’ decision to field a majority of new faces to contest GE15, is one of the factors behind the campaign atmosphere in the state being rather lukewarm.

This presents a challenge to media practitioners, who are only able to “chase” candidates as news material, without hot issues being played at the state and federal levels.

BN in Melaka takes the approach of holding group talks which target the presence of voters in a polling district centre (PDM), without mega talks featuring the presence of the party’s “top guns”, to clarify an issue at the national level.

Only on Wednesday, the atmosphere heated up a notch with the presence of caretaker prime minister, Datuk Seri Ismail Sabri Yaakob, who held a walkabout around the town and night market near Kampung Pulau in Durian Tunggal, Alor Gajah, which is a stronghold of Parti Amanah Negara (Amanah), a Pakatan Harapan (PH) component party.

In Kedah, Noran Zamini Jamaluddin, the BN candidate contesting the Pokok Sena parliamentary seat, said that his campaign was running smoothly with the help of the party machinery, and he aimed to meet as many voters as possible, including in enemy strongholds.

“What I enjoy is the community’s acceptance. In the past, it was difficult for BN to penetrate areas that were PAS strongholds, but now that scenario has changed.

“I have so far been accepted in all PDMs; thus far they have opened up space and we can enter the area without any problems,” said Noran Zamini.

In several constituencies in Selangor, the campaign turned into a mission to help flood victims, following several areas in Petaling and Klang districts being hit by flash floods since Wednesday.

A total of three temporary evacuation centres (PPS) at Sekolah Kebangsaan (SK) Kampung Johan Setia and PPS SK Binjai, Meru in Kapar, both in Klang district, and PPS at Al Falah Mosque in Kampung Budiman in Petaling district, were opened to accommodate 633 flood victims as of today.

Last night, Selangor Mentri Besar, Datuk Seri Amirudin Shari, who is also the PH candidate contesting the Gombak parliamentary seat, and the PN candidate for the Kapar parliamentary seat, Dr Halimah Ali, were among those who cancelled campaign activities to check the flood situation in affected areas.