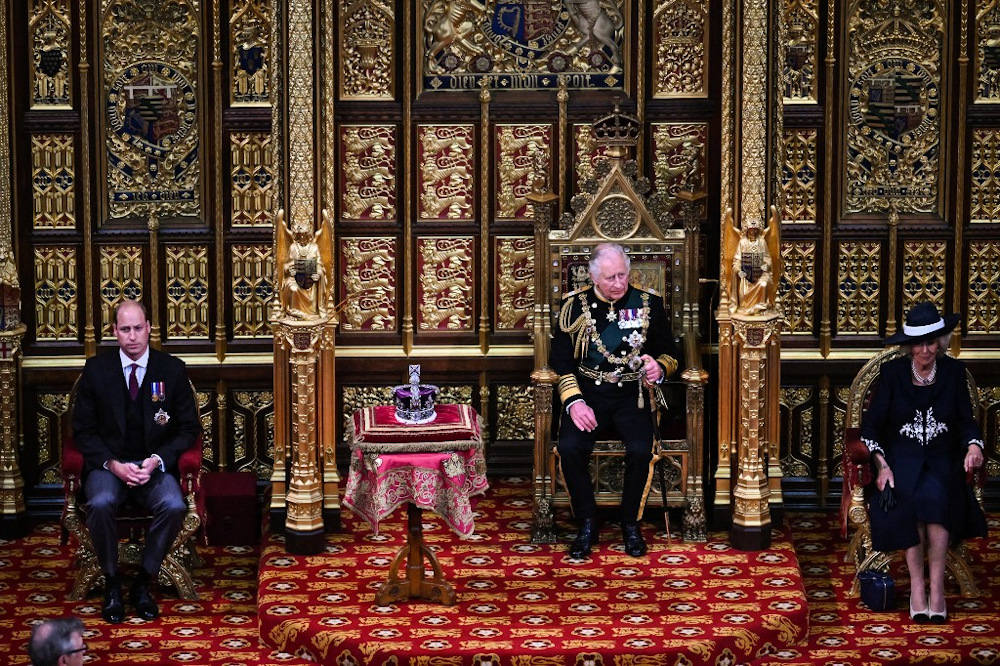 Britain’s Prince Charles, Prince of Wales sits by The Imperial State Crown (2nd left) with Prince William, Duke of Cambridge and Camilla, Duchess of Cornwall in the House of Lords Chamber, during the State Opening of Parliament May 10, 2022. — AFP pic

LONDON, May 16 — Prince Charles heads to Canada this week to represent head of state Queen Elizabeth II, with more attention than ever on his future role due to his mother’s age and failing health.

Increasingly, every movement of the heir to the throne is attracting greater scrutiny, as the 96-year-old monarch’s record-breaking 70-year reign draws to a close.

Last week, Charles, 73, was a last-minute stand-in for the queen at the state opening of the UK parliament, in the clearest sign that his long wait to become king is approaching its end.

His appearance and the queen’s absence from the ceremony for the first time in nearly 60 years have prompted a noticeable shift in public opinion towards her position.

A YouGov survey for Times Radio conducted this week suggested that 34 per cent of people now believe she should retire, instead of remaining queen for life, up from 25 per cent last month.

Just under half (49 per cent) said she should remain queen, down 10 points from last month.

At the same time, Charles’s stock has risen: 36 per cent believe he will make a good king, up four points from last month, the survey of 1,990 people found.

His visit to Canada comes as part of a series by senior royals to some of the 14 Commonwealth countries outside the UK where the queen is also head of state.

But the visits, which have included Platinum Jubilee celebrations, have not gone entirely to plan, particularly in the Caribbean.

His youngest brother, Prince Edward, experienced similar protests, in a sign the global reach of the monarchy that Charles will inherit will likely be much diminished.

“There’s going to have to be serious thought about what works in the future… what are the appropriate activities, and whether in particular the military and ceremonial-like aspects of tours are in keeping with the modern world,” he told AFP.

Charles and his wife Camilla, 74, could be on surer ground in Canada, which the queen has visited 22 times since 1951 — a year before she came to the throne.

Their visit from Tuesday to Thursday will be the Prince of Wales’s 19th since 1970, and the Duchess of Cornwall’s fifth since 2009.

They will travel thousands of miles from Newfoundland and Labrador in the east to the Northwest Territories in northern Canada.

A special reception is planned in Canada’s National Capital Region to mark the jubilee.

There are nevertheless signs of a growing estrangement from the royals in the world’s second-biggest country, according to the most recent polling.

Nearly two-thirds of Canadians still view the queen favourably. However, a majority (51 per cent) are now no longer in favour of keeping a constitutional monarchy.

Part of the decline in support is linked to evolving views on colonialism, as Canada reckons with its past, including the abuse and death of Indigenous children.

The discovery over the past year of at least 1,300 unmarked Indigenous graves at former state residential schools has prompted widespread soul-searching.

Prime Minister Justin Trudeau, who met the queen at Windsor Castle in March, has made reconciliation a priority of his government.

Charles and Camilla, whose programme touches on themes close to their heart, including climate change and literacy, will acknowledge the abuse during the visit.

His deputy private secretary for foreign, Commonwealth and development affairs, Chris Fitzgerald, said the prince would engage with Indigenous communities on the trip.

“Over five decades, His Royal Highness continues to learn from Indigenous peoples in Canada and around the world,” he said last month.

“He recognises their deep ties to the land and water and the critical traditional knowledge they hold to restore harmony between people and nature.” — AFP