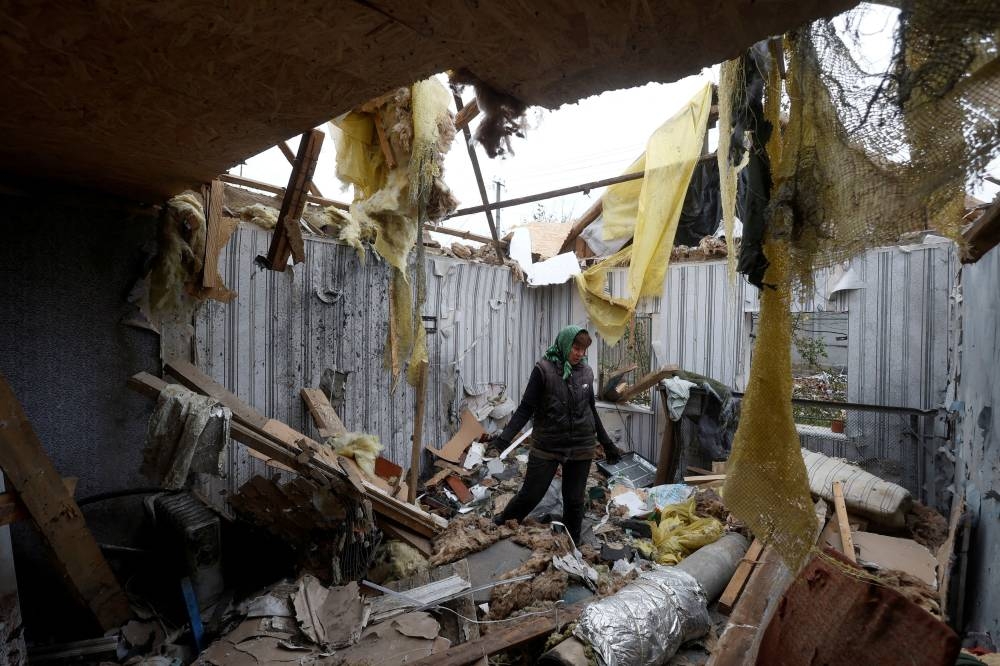 Local resident Serhii Tamara removes debris inside a house of her son, destroyed during a Russian military attack in the village of Novooleksandrivka, in Kherson region, Ukraine November 9, 2022. — Reuters pic

KYIV, Nov 10 — For the first time since Moscow launched its full-scale invasion in February, the guns fell silent around Nadiia Nizarenko’s devastated hamlet on the frontlines northeast of the Ukrainian city of Kherson.

“Last night was the first night it’s been quiet,” the diminutive 85-year-old said on Thursday in the hallway of the cramped apartment that she, her daughter and son-in-law refused to abandon as fighting raged daily around them.

Her village – which could not be disclosed under Ukrainian military rules – sits in ruins amid weed-choked fields near Snihurivka, a town on the border of Kherson and Mykolaiv provinces reclaimed by Ukrainian soldiers on Thursday from Russian troops.

The Russians’ retreat followed Moscow’s announcement a day earlier that it was moving its forces entirely from the portion of Kherson on the west bank of the Dnipro River to the east side because it could not ensure supplies needed to stave off advancing Ukrainian forces.

The overnight quiet that fell over Nazarenko’s village suggested that Russians slipped out before Ukrainian troops moved in, as a freezing, soup-thick morning fog blanketed the landscape.

But like officials in Kyiv, Nazarenko was leery of Russian President Vladimir Putin’s motives for abandoning an area that in September he proclaimed would forever be part of Russia.

“We should wait until tonight because this could change,” said Nazarenko, her face lit by a string of small lights powered by a car battery. “We hope this silence means that the Russians are leaving.”

‘My place is here’

Her daughter, Svitlana Lischeniuk, 63, who retired last year as the local school director, shared her mother’s hopes and suspicions.

“They (the Russians) can prepare a trap for our army,” she said, standing outside her two-storey apartment block after unloading milk cans and jugs filled with well water from a trailer hitched to the family car.

“We will get Kherson back, but what is very important is that our soldiers don’t suffer.

“The Russians are liars … All we got was the crying of children and suffering and anguish,” she added, her face radiating anger. “They will have to answer for what they’ve done.”

The other apartments in her block are vacant, their windows shattered. The owners fled along with all but 69 of the village’s 9,000 other residents from the fighting that left most homes damaged or destroyed.

The school where she worked has been reduced to rubble.

Lischeniuk said she had also left this summer but returned to help guard her neighbour’s properties and extinguish fires that she said the Russians deliberately set to destroy the wheat in surrounding fields.

Clad in soiled jeans and a woolly hat, Lischeniuk described how a Russian cluster munition exploded outside the apartment block. The bomblets shattered the kitchen wall and new plastic-framed windows that her husband had installed.

The family has lived on humanitarian aid, pickled vegetables grown over the summer, water from a nearby well and occasional grocery runs to the town of Bashtanka. They also have a portable generator and a wood-burning stove.

“We have wood, so we have heat,” Lischeniuk said. “We will be able to survive and I’m sure we can get through the winter.” — Reuters