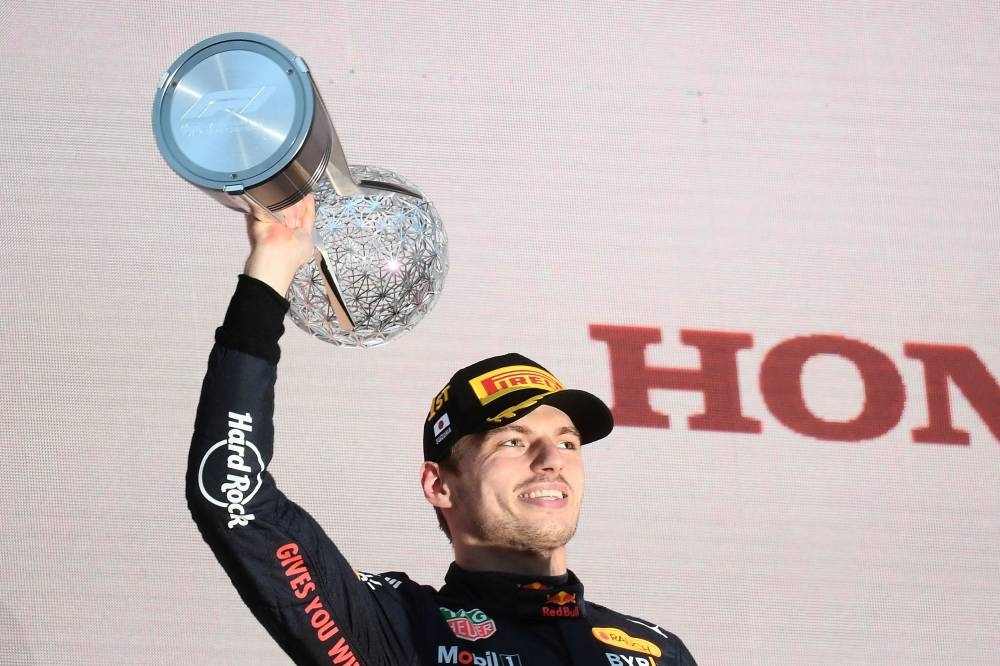 Red Bull Racing’s Dutch driver Max Verstappen poses on the podium with the trophy following his victory at the Formula One Japanese Grand Prix at Suzuka, Mie prefecture on October 9, 2022. — AFP pic

SUZUKA, Oct 10 — Max Verstappen joined a gilded group of double champions on Sunday, completing a rapid rise to eminence with a flourish in Japanese rain at Suzuka, in utter contrast to his acrimonious maiden success in Abu Dhabi last December.

There he snatched a controversial last-lap triumph from Lewis Hamilton, depriving the Briton of an unprecedented eighth triumph to land Red Bull’s first championship since Sebastian Vettel completed four in a row in 2013.

Mercedes retained their teams’ title for an eighth consecutive season, but that result spelt the end of their Formula One domination.

Red Bull had firmly hinted at what lay ahead and in 2022 they delivered a supreme car, capable of winning anywhere and in any conditions, and a more polished and mature version of Formula One’s first Dutch champion.

Having celebrated his 25th birthday just over a week ago, he is the second-youngest two-time champion behind Vettel and now stands at the threshold of what may be a record-breaking career.

It is a remarkable achievement by a driver who was only 17 when he began his Formula One career with Toro Rosso in 2015.

He claimed his maiden victory a year later with Red Bull driving with an almost reckless abandon. Now teenage “Mad Max” has matured into “Mighty Max”.

The son of Jos, a former journeyman Formula One driver, and Belgian world-class kart racer Sophie, Max sped to multiple titles as a boy and almost won the F3 title at his first attempt aged 15.

Although his parents separated when he was a child, their influence was lasting and created an aggressive racer who grew up with his father surrounded by cars and mechanics.

“He had already proved his speed,” he said. “But in 2018, I remember the first four or five races he had crashes and made quite a lot of mistakes.

“But he found a way to fix that and he matured a lot. I think in 2018 he made the biggest transition from young boy into a man with some off-track maturity. It made his track results more consistent and, now, just see what he has done.”

Newey was not only F1’s top car designer, but graduated from Southampton University in 1980 with his thesis on ground effect technology helping him to a first-class honours degree in Aeronautics.

It was a critical advantage over his rivals and Verstappen was vindicated for staying loyal to Red Bull as Ferrari tried to tempt him away.

“I trusted the process,” said Verstappen.

“That’s why I never left. Sometimes, you could have said: ‘Ah, it’s time to leave and go somewhere else and chase immediate success.’ But I believed in the team, the people, and it has paid off. So, I am very happy.”

Verstappen’s patience was rewarded with a winning car for 2022, a new contract until 2028 and none of the rancour that punctuated last year’s title battle.

“For me, it is really enjoyable to be a part of this team. There’s a good atmosphere and that is the most important thing,” Verstappen said.

“Sometimes, you have to be patient as well. You can’t force things… That’s what I’ve learned.”

Another 10 drivers have three or more, including the two at the top of the list with, Hamilton and Michael Schumacher. They are future targets.

Verstappen’s triumphs are built on his supreme ability and confidence, but also Mercedes’ failure to build a competitive machine and Ferrari’s self-inflicted problems that range from driver errors to strategic blunders and mechanical failings.

“I think then the cars were so difficult to follow.

“But then again, the racing we had in 2021, particularly between Max and Lewis, was just on another dimension.

“I mean those two guys were going at it hammer and tong and it was two titans at the top of their game. It was fantastic to be part of it.” — AFP