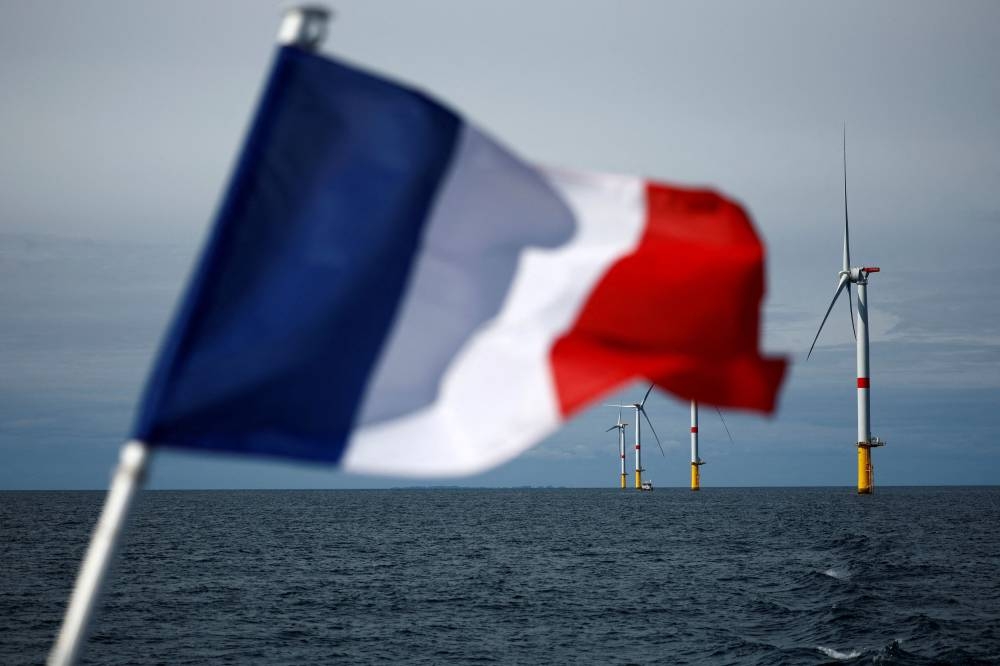 A French flag flies in front of wind turbines at the Saint-Nazaire offshore wind farm, off the coast of the Guerande peninsula in western France, September 30, 2022. — Reuters pic

PARIS, Oct 6 — Iranian state television aired today what it said were “confessions” by a French couple arrested five months ago, a move the government in Paris condemned as “shameful, revolting and unacceptable”.

The French man and woman were arrested in May when Iran was the scene of demonstrations by teachers demanding pay rises and calling for the release of detained colleagues.

The broadcast of their alleged confessions comes as Iran grapples with a wave of women-led protests that erupted on September 16 following the death in custody of Iranian Kurdish woman Mahsa Amini.

Iran has repeatedly accused outside forces of stirring up the protests and last week announced that nine foreign nationals — including from France, Germany, Italy, Poland and the Netherlands — had been arrested.

In the video broadcast today on Iranian state television, a woman speaking French and claiming to be Celine Kohler is heard saying that she is an “agent of the DGSE” French intelligence service.

She said the couple were in Iran “to prepare the conditions for the revolution and the overthrow of the Iranian Islamist regime”.

She said they had planned to finance strikes and demonstrations and even use weapons “to fight against the police”.

According to her partner Jacques Paris, who was also said to be shown in the video, the DGSE’s objectives “were to put pressure on the Iranian government”.

The broadcast was strongly condemned by the French government.

“Cecile Kohler and Jacques Paris have been arbitrarily detained in Iran since May 2022, and as such are state hostages,” its foreign ministry said.

“The staging of their supposed confessions is shameful, revolting, unacceptable and contrary to international law,” it said in an unusually harshly-worded statement.

Iran had announced on May 11 the arrest of two Europeans “who entered the country with the aim of triggering chaos and destabilising society”.

It later said that it had arrested two French nationals who had entered the country on tourist visas.

Kohler and Paris are among a number of Western citizens detained in Iran, in what activists claim is a deliberate policy to extract concessions from the West — accusations rejected by Tehran.

Rights groups based outside Iran have repeatedly accused the Islamic republic of extracting “confessions” from detained foreigners and Iranian campaigners under duress and then broadcasting them on state media as a propaganda tool.

A 2020 report by the Paris-based International Federation for Human Rights and its member organisation Justice for Iran said Iranian state media had broadcast over 350 such confessions in the space of a decade.

It said such “confessions” were “systematically broadcast” by Iranian state-owned media “to instill fear and repress dissent”, adding that victims had been “subjected to torture and ill-treatment”.

Iran’s judicial authority issued an order in October 2020 banning torture, the use of “forced confessions”, solitary confinement, illegal police custody and other violations of defendants’ rights.

That came a week after controversy sparked by videos posted on social media showing police officers beating detainees in pickup trucks in the middle of a street.

More than 20 Westerners, most of them dual nationals, are held or prevented from leaving Iran.

Among them are the French-Iranian researcher Fariba Adelkhah, arrested in June 2019 and later sentenced to five years in prison for undermining national security, allegations her family has strongly denied.

Another French citizen, Benjamin Briere, was arrested in May 2020 and later sentenced to eight years and eight months in prison for espionage, charges he rejects.