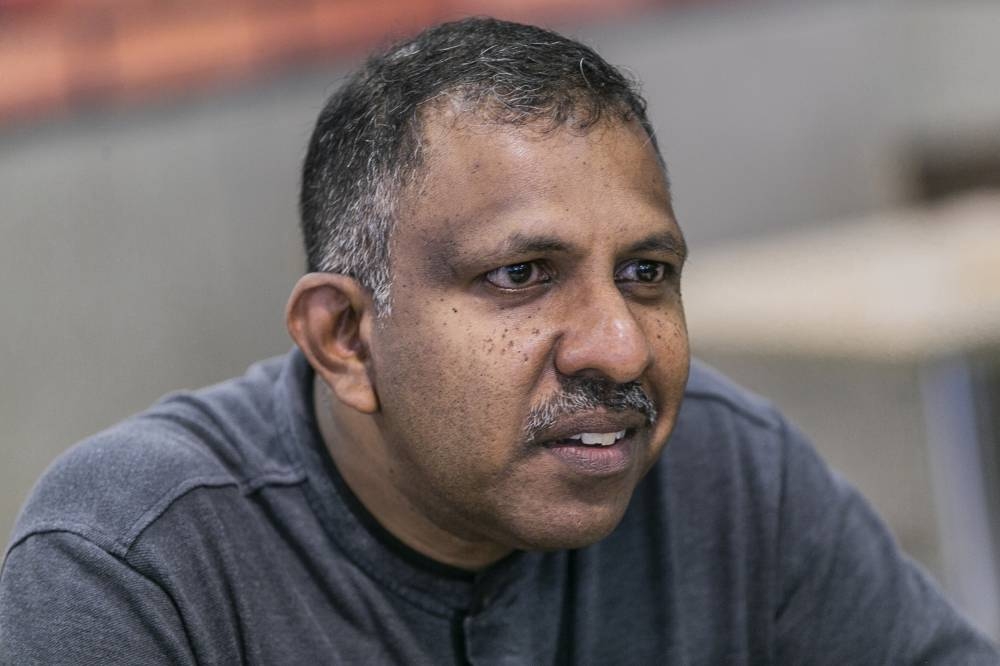 KLUANG, Nov 15 — If you are part of a low-earning household in Kluang and have something on your mind, there is a chance that the first person you would ask is the “Google anneh” himself: U. Ramendran.

Speaking to Malay Mail, the businessman, engineer and social activist said he earned his “brother Google” nickname as he spends a lot of time researching online to educate and update others who lack resources, and just like the search engine, he is the go-to guy if you need help filling up bureaucratic forms.

“I realised the guys here failed. The politicians here failed. They don’t seem to be in tune with what’s happening on the ground,” he said when asked about the reason he is contesting as an independent candidate for the seat.

Ramendran — who has worked in several multinational companies (MNCs) as a mechanical engineer and trainer, and now is a consultant — said he is sick of “useless politicking and lack of concrete action plans.”

By his own admission, the father of four’s political achievements so far have been fairly minor, but no less impactful.

He said in 2014, he led the parent-teachers’ association to secure RM73,000 directly from the Prime Minister’s Department to fix a run-down computer lab in his children’s school after allegedly being given a run-around from other politicians he had approached.

When Covid-19 was raging, Ramendran said he helped register about 300 people from the bottom 40 per cent household (B40) community as his own dependents, just so they can get vaccinated. He also made videos to raise awareness of the immunisation drive, so his community will not be drawn in by anti-vaccine conspiracy theories.

He said many did not even have smartphones, so they were unable to register for vaccination appointments via the smartphone application MySejahtera.

“Some of them, their children were working in Johor Baru and Kuala Lumpur and they are here, living alone. No transport. So they will tell me: Thambi, I do not have transport,” he related, using the Tamil word for “younger brother”.

“Some of the 60-year-olds meanwhile, do you know what they told me? When actor Vivek passed away, they said: ‘Vivek passed away, we don’t want to go for vaccination’. So I did Tamil-language videos saying no, you must go. So much so that I fought with some of them saying, if you do not go, then you will die.”

Vivek is a famous South Indian comedian and actor who was said to have died from his Covid-19 vaccination. He suffered a cardiac arrest a day after the vaccination, but the Chennai government said that the two incidents were not linked. Prior to his death, Vivek had been urging people to get vaccinated against Covid-19, which saw millions in India dying.

Ramendran said that he also helped over 30 underprivileged students apply for a private programme which provided school children with smartphones for their studies.

“You see, I am basically a busybody, because I was in a Tamil school. I know the B40s. Some of them, they cannot read even a simple thing in the Malay language. [But] the digital content of quality, most of it is in the English language or it’s in Malay. It is not in the Tamil medium.

Ramendran said that the intention to help his community is what also led him to enrol his four children into a Tamil medium school here, to understand the situation of the B40 community, especially the ethnic Indians.

He has documented his achievements in the school’s yearbook, as a testament of his grit and to prove to his naysayers and supporters alike, that he is capable of more.

“This is the only proof I have. You know why? Because you know what the politicians will say. That they did all these. Prior to 2012 nothing happened but after 2012, the school, I changed the look of the school. I have all the photos,” Ramendran said.

From a pen to a car

Ramendran wanted a pen as his logo, but had to settle for a car. — Picture by Hari Anggara

Even getting nominated as a candidate was not easy for Ramendran, who lost his initial nominator and was forced to choose a logo he did not prefer.

Prior to Nomination Day, he had told a returning officer that he wanted a pen as his logo as he likes writing, but was refused. After drawing lots, he ended up with a car as his logo.

“Luckily I didn’t get a prawn logo! I got a car. Not that I like it, but I had no choice. At the end of the day, does it matter what logo I have?” he said.

Four days before nomination day, his nominator vanished and was not reachable, while his seconder had a sudden family emergency.

Suspecting something amiss, Ramendran roped in a pair who would never abscond: his 24-year-old son and his 22-year-old daughter.

“Some were worried that they will lose their business. One shopkeeper, my good friend, he just went missing in action. Do you know what he said? His clients are 70 per cent Malays and that they might look at him differently,” he said, adding that some supporters who were ethnic Indians and Chinese also backed off owing to business interests and prospects of losing funding.

“A leader, look at all the great leaders in the world. When they started, they never had a big group behind them. They were first alone. Martin Luther King was alone, Karl Marx was alone. Obama didn’t have a big team sitting with him right? But you have to first stand up. You have to throw your hat into the ring.

“You don’t say: ‘let me have a big team first and then I jump into the ring’. No, it doesn’t happen that way,” he added.

Ramendran admitted that being an independent candidate can be a huge bargaining chip with both the government and Opposition, which may result in him delivering promises better.

For Ramendran, an active democracy is necessary to keep politicians in line, and that can be achieved by voting out those who do not perform during their term. Even if that person is himself.

“We are there for five years, right? You judge me based on my five years. Next election, if you think I’m aligned [to certain political parties] and don’t see any benefit, throw me out. It’s your choice. Again, like I said, because I do not have a party leader, I don’t answer to anybody.

Despite the odds being stacked against him, Ramendran is not backing down until he crosses the finishing line on November 19.

“The easiest thing to do is give up. What I’m saying is, what’s the worst that can happen to me? I will lose RM10,000,” he said, adding that keeping his deposit would already be a win for him.

“So what? At least I have tried. This is what is lacking now in the country.