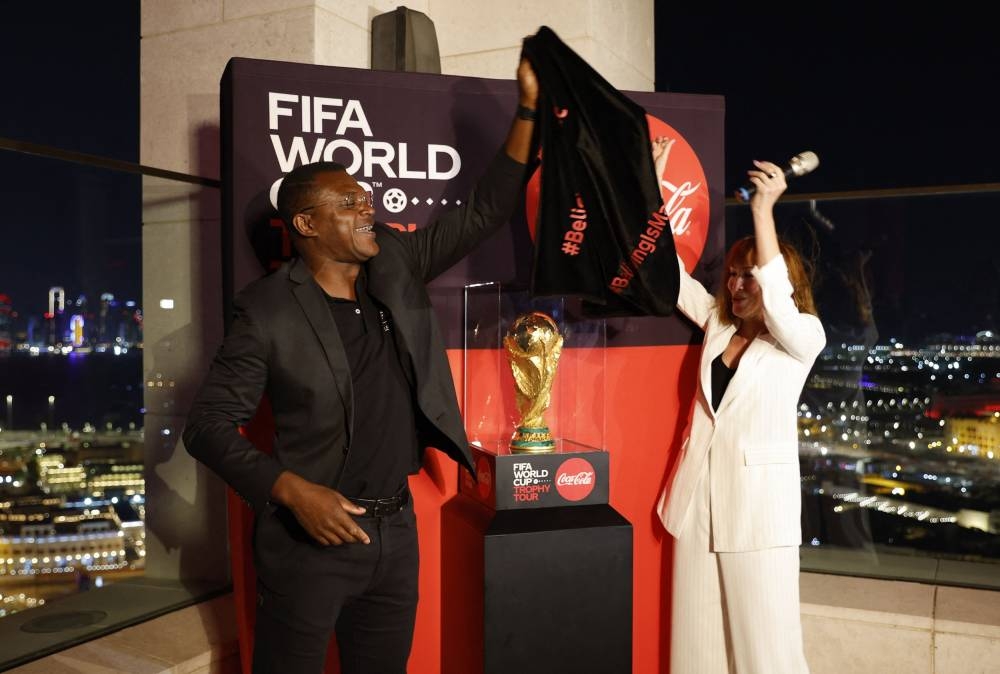 Marcel Desailly unveils the World Cup trophy during the Trophy Tour at the Alwadi Hotel in Doha November 13, 2022. — Reuters pic

DOHA, Nov 14 — One week from kickoff, the World Cup trophy returned to Qatar on Sunday, teams and fans started arriving and safety barriers went up across Doha ahead of one of the most controversial football tournaments ever.

The trophy which will be presented on December 18 returned from a world tour of 51 countries in time for next Sunday’s opening game between hosts Qatar and Ecuador.

Fifa’s plea to “focus on the football” has struggled to be heard however amid an international spotlight on Qatar’s treatment of migrant workers, women and the LGBTQ community. Qatar has angrily rebuffed most of the attacks and local media on Sunday blasted the “arrogance” of some Western countries.

“It seems to have been all we have read about in recent weeks,” said Ringo Gonzalez, an Ecuadoran based in Germany, who was among fans gathered at the World Cup countdown clock on the Doha seafront on Sunday.

“It will be good to see the teams finally doing something. I want Ecuador to do well and to see Lionel Messi and the other big names in action.”

The United States has already arrived in Doha and Australia were to join them on Sunday.

But many star players, including Messi and Kylian Mbappe at Paris Saint-Germain were still involved in European club contests on Sunday before heading to the World Cup.

Qatar is predicting more than one million fans will be in the smallest country to host a World Cup, and many have arrived.

Qatar Airways chief executive Akbar al-Baker said that all flights were full for the World Cup.

“We are full during November and December,” Baker said at the naming ceremony for MSC Europa, one of three cruise ships that will house 10,000 fans for the World Cup

No champagne for ship naming

In a concession to Qatar’s Islamic culture that restricts alcohol and bans gambling, a bottle of rose water was smashed on the hull instead of traditional champagne for the inauguration. The ship’s casino was to be closed while it was in port.

MSC said that the three ships are fully booked for the first two weeks of the 29-day tournament.

On land, barriers have gone up on main streets and around metro stations and stadiums as security forces brace for the football invasion.

Organisers say 2.9 million of the 3.1 million tickets have been sold and scores of hopeful fans waited outside the Fifa ticket centre hoping that scarce passes become available for top games.

Matthew Coleman, an Australian living in Doha, and his Dutch friend Gijs Beenker, left empty-handed because there were no “interesting” matches available.

At a nearby World Cup souvenir store, the staff said Europeans who buy the official ball or the La’eeb mascot were the main clients.

Migrant workers from South Asia have bought thousands of replica Brazil and Argentina shirts and can be seen wearing them in the streets. The labourers have been at the centre of an often acrimonious dispute over deaths, injuries and their working conditions since Qatar was awarded the World Cup in 2010.

European and Qatari media on Sunday kept up their war of words over whether the energy-rich Gulf state should host the event.

One British newspaper said that many fans believed that Indians in Qatar had been “paid” to take part in rallies supporting Argentina and Brazil. Thousands of migrant workers flocked to the march on Friday.

In response, Qatar’s Al-Sharq newspaper said the anti-Qatar campaign “confirms the arrogance of some Western countries who believe organizing the World Cup must remain monopolized by them”.

Al Raya said “the enthusiastic, festive atmosphere of large crowds of football fans of different nationalities in Doha revealed the failure of smear campaigns led by some media and Western politicians against the 2022 World Cup”. — AFP