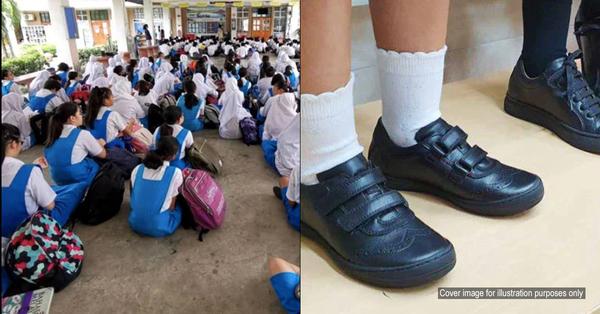 The father of a 13-year-old Malaysian Indian student, who was allegedly punished for wearing “wrong” shoes to school in Tasek Gelugor, claims that the authorities are trying to “cover up” the issue

According to 38-year-old R Mogan, officers at the Kepala Batas district Education Department threatened his daughter to deny that a female teacher had forced her to kneel down on the hot tarmac with her hands raised for wearing shoes with velcro straps instead of lace, Malaysiakini reported yesterday, 4 November.

In the alleged incident — which happened on Tuesday, 1 November — the Form One student was also ordered by the teacher to remove her pottu/bindi, a coloured dot or sticker worn on the centre of the forehead, as well as wipe away the thiruneeru/vibhuti, which is sacred ash, from her forehead.

The student also claimed that the teacher cut off her kayiru/kalava, a holy thread.

She lodged a police report against the teacher, who denied the student’s claims in her report. Following which, Tasek Gelugor police chief Radzi Ahmad said that their investigation found no truth in the complaint.

Reacting to Radzi’s remarks, Mogan defended his daughter, saying that there was no reason for the Form One student to make up stories about the incident that has left her traumatised.

“I believe everything my daughter told me. I stand by her. She is not crazy to be making up such a story. “Unfortunately, she is being made out to look like one,” New Straits Times quoted him as saying.

Mogan added that his daughter had just been transferred to the school three weeks ago and that she had nothing against the teacher, or anyone for the matter, to make up such a story.

The father is now considering taking legal action against the teacher and the school, saying, “I will go all out to fight for [my daughter]”

“I will take legal action against the school, the teacher concerned, the district and the state Education Department for the punishment and embarrassment to my daughter. I believe that the school administration and the Education Department have done everything to destroy the evidence of the incident and cover up the whole issue,” he said alleging that the teacher also pressured students not to reveal evidence.

“One day after the incident, the teacher concerned also threatened the students of the daughter’s class not to reveal anything about the incident or else the teachers and students will be taken in police jeeps to the police station for investigations. I believe the teacher, headmistress, and the district Education Department are trying to cover up the incident, but I will take them to court,” the 38-year-old said.

Mogan, who recently got a job as an engineer after losing his previous job two years ago due to the pandemic, said that he just wants justice to prevail as he feels his daughter was unjustly punished.

According to Mogan, if the state Education Department and the district education office were serious, they should have suspended the teacher pending an investigation, but everybody is blaming his daughter.

“It’s true what my daughter said that I could not afford to buy her new school shoes with lace straps as I did not get my salary yet then. Also, is there anything wrong with wearing black velcro strap shoes to school? Is there any circular saying that such shoes are not allowed or is it a ruling set by certain people?” he asked.

Read more about the case here: