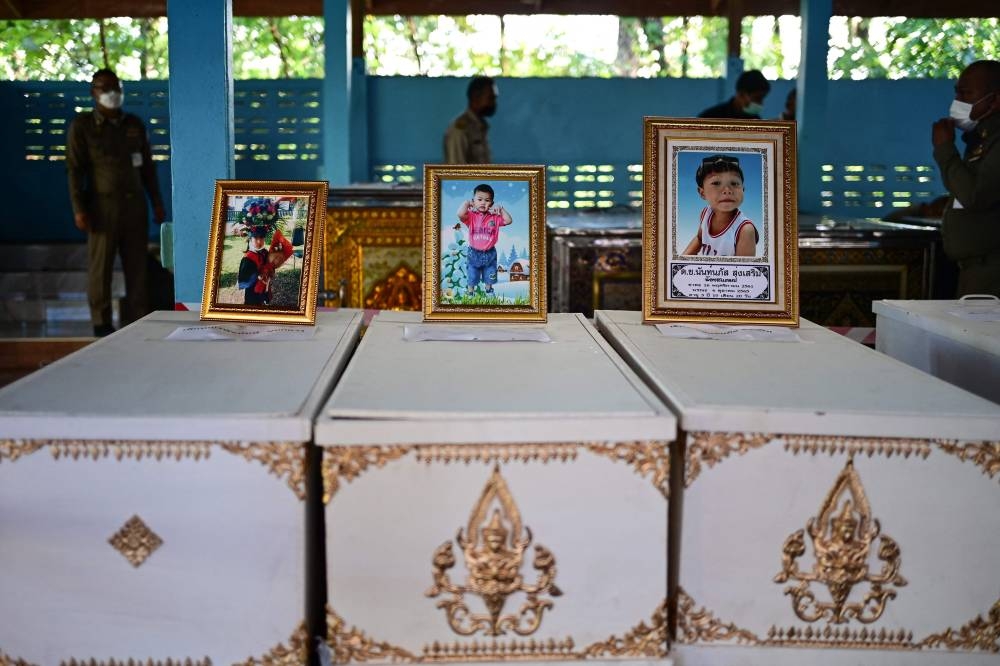 Portraits of child victims are displayed at the top of their coffins for the funeral rituals at the Wai Si Uthai temple in Na Klang in Thailand’s northeastern Nong Bua Lam Phu province on October 7, 2022. – Weeping, grief-stricken families gathered on October 7 outside a Thai nursery where an ex-policeman murdered two dozen children in one of the kingdom’s worst mass killings. — AFP pic

NA KLANG, Thailand, Oct 7 — Grief-stricken families prepared to begin funeral rites today for 36 people murdered by a sacked policeman who rampaged through a nursery armed with a gun and knife in one of Thailand’s worst mass killings.

After a day of mourning at the scene of the bloodshed, coffins bearing the bodies of the victims — 24 of them children — were transported to temples to be handed over to relatives.

King Maha Vajiralongkorn will later visit survivors in hospital — a rare direct interaction with the public for the Thai monarch, who is officially regarded as a semi-divine figurehead.

At one temple, 10 white and gold coffins, some so small they looked like toy boxes, were loaded into fridges in the evening ahead of the customary three days of mourning before cremation.

A young father, his face a mask of tears, staggered away from other mourners after watching his son’s coffin loaded away.

Earlier at the small, low-slung nursery, a line of heartbroken parents placed white roses on the building’s steps as the baking sun bore down.

The dead include pregnant teacher Supaporn Pramongmuk, whose husband posted a poignant tribute on Facebook.

“I would like to say thank you for all the support for me and my family. My wife has fulfilled her every duty as a teacher,” Seksan Srirach wrote.

Armed with his own legally purchased 9mm pistol and a knife, former police sergeant Panya Khamrab began his murderous spree at the childcare centre at about 12:30pm (0530 GMT) yesterday.

Following the attack, 34-year-old Panya fled the scene in a pickup truck to head home and murder his wife and son before taking his own life, police said, ending the rampage at about 3pm.

Pitak Kongtapthai, head of the police investigations unit in the province, said most of the deaths were caused by a combination of knife wounds and gunshots.

Panya joined the police in 2012 and rose to the rank of sergeant but was suspended from the force in January and sacked in June for drug use, National Police Chief Damrongsak Kittiprapat told reporters.

Damrongsak said initial tests found no drugs in Panya’s body after the attack, though several locals said Panya was known in the area as a methamphetamine user.

The interior ministry said it would “review and intensify our preventative measures on drugs” in the wake of the attack, including tightening rules on gun ownership.

The police chief said the attacker used his knife as the “main weapon” in the nursery.

He had an argument with his wife hours before the attack, Damrongsak said, but “nothing irregular” was noted when he appeared in court that morning on a drugs possession charge.

Flags on government buildings flew at half-mast today in a gesture of mourning for one of the deadliest days in recent Thai history.

Nanthicha Punchum, acting chief of the nursery, described harrowing scenes as the attacker barged into the building in the rural Na Klang district.

“There were some staff eating lunch outside the nursery and the attacker parked his car and shot four of them dead,” she told AFP.

She said the attacker smashed down the door with his leg and then started stabbing the children.

Witness Pranom Innurak described how her sister, now recovering in hospital, was injured.

“He (Panya) was driving a car on his way back home and he rammed into everyone on his way,” she told AFP, adding that her sister’s daughter was among the dead.

“When my sister got hit, she wasn’t that hurt yet. She flew out from her food stall. He then used a knife to attack her.”

Thai leader Prayut has ordered a rapid probe into the attack, and today police interviewed witnesses and families.

The tragedy came less than three years after a soldier in the northeastern city of Nakhon Ratchasima gunned down 29 people and wounded scores more in a 17-hour rampage, before he was shot dead by commandos.

And less than a month ago an army officer shot dead two colleagues at a military training base in the capital Bangkok. — AFP