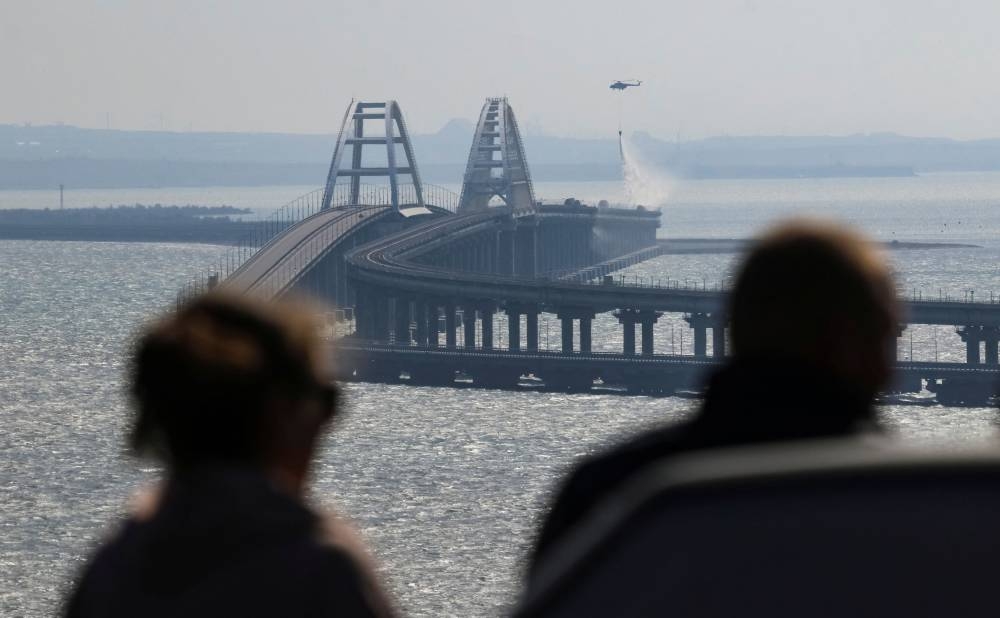 A view shows a fire on the Kerch bridge at sunrise in the Kerch Strait, Crimea, October 8, 2022. — Reuters pic

LONDON, Oct 8 — A blast on the strategic road-and-rail bridge linking Russia and the Crimean peninsula on Saturday brought down sections of road taking traffic in one direction, damaging a crucial supply route for Russian forces in Ukraine.

The blast on the Kerch bridge, for which Russia did not immediately assign blame, prompted gleeful messages from Ukrainian officials but no direct claim of responsibility.

Russia seized Crimea from Ukraine in 2014 and the 19-km bridge linking it to Russia’s transport network was opened with great fanfare four years later by President Vladimir Putin himself.

It now represents a major supply route for the Russian forces who have taken control of most of southern Ukraine’s Kherson region, and for the naval port of Sevastopol, whose governor told locals: “Keep calm. Don’t panic.”

It was not yet clear if the blast was a deliberate attack or an accident but the damage to such high-profile infrastructure came at a time when Russia has suffered several battlefield defeats and could further cloud the Kremlin’s messages of reassurance to the wider Russian public that the conflict is going to plan.

It also took place a day after Putin’s 70th birthday.

The head of Ukraine’s National Security and Defence Council, Oleksiy Danilov, posted a video of the burning bridge on social media alongside a video of Marilyn Monroe singing “Happy birthday, Mr President”.

Since the start of the invasion on February 24, Ukrainian officials have made regular allusions to their desire to destroy the Kerch bridge, seen in Ukraine as a symbol of Russia’s occupation of Crimea. Ukraine’s postal service said on Saturday it would print a special stamp to commemorate the blast.

The Russian National Anti-Terrorism Committee said a freight truck had blown up on the bridge’s roadway at 6:07 a.m. (0307 GMT), causing seven fuel tanker wagons to catch fire on a train heading for the peninsula on the bridge’s upper level.

It said two spans of road bridge had partially collapsed, but that the arch spanning the Kerch Strait, the waterway through which ships travel between the Black Sea and Azov Sea, was not damaged.

Sergei Aksyonov, the Russian governor of Crimea, said on social media that the road bridge was still intact in one direction, although traffic was suspended while the damage was assessed.

Images posted on social media showed one half of the roadway blown away, and the other half still attached, but cracked, while a train on the upper bridge was engulfed in flames. The images could not immediately be verified.

Others taken from a distance showed thick smoke pouring from part of the bridge.

An adviser to Ukrainian President Volodymyr Zelenskiy posted a message on Twitter saying the incident was just “the beginning” but stopped short of saying Ukrainian forces were responsible for the blast.

“Everything illegal must be destroyed, everything that is stolen must be returned to Ukraine, everything occupied by Russia must be expelled,” Mykhailo Podolyak wrote.

Moscow has presented largely Russian-speaking Crimea as a historic and cherished part of Russia and, especially this year, one where Russians could holiday in large numbers, supposedly safe from the war.

Kirill Stremousov, the Russian-installed deputy administrator of the Kherson region, said the bridge incident “will not affect the army supply very much”.

“But there will be problems with logistics for Crimea,” he added in a post on social media.

Mykola Bielieskov of the Ukrainian Institute of Strategic Studies, which advises the presidency in Kyiv, said the Kerch bridge was irreplaceable for Russia’s invasion forces, and if it were severed, “the whole Russian southern front will crumble quickly and easily”.

Although Moscow’s forces have seized a stretch of coastal Ukraine linking the Kherson region and Crimea to Russia, Bielieskov said the transport connections there were poor, and that Russia had preferred to send reinforcements to Kherson along the more circuitous route of the bridge into Crimea.

Russian Railways said trains heading for Crimea would be subject to extra checks, and that it was working with the government to find the “best way to deliver goods to the peninsula”.

In a video message Aksyonov, the Crimea governor, said he wanted to “assure Crimeans that the Republic of Crimea is fully provided with fuel and food. We have more than a month’s worth of fuel, and more than two months’ worth of food”.

The Russian governor of Sevastopol, which has separate territorial status in Crimea as home to the Black Sea fleet, also sought to reassure locals.

“We are not cut off from the mainland!” Mikhail Razvozzhayev posted on Telegram. “Keep calm. Don’t panic.”