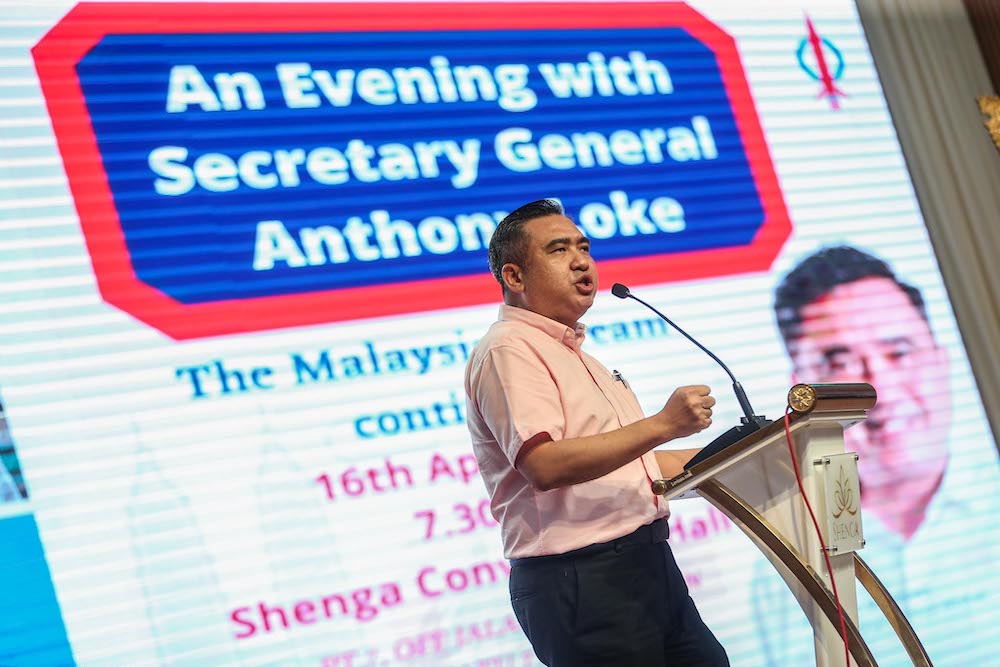 BATU CAVES, April 17 — The problem of “basikal lajak” or modified bicycles that usually lack safety features such as brakes and lamps are not just about road safety issues falling under the Transport Ministry, former transport minister Anthony Loke has said.

Loke, who is also DAP secretary-general, said that the basikal lajak problem would instead best be tackled comprehensively by ministries coming together, as there are other considerations such as the family institution and the responsibility of parents over basikal lajak users.

“The basikal lajak problem is a menace and social problem not just in terms of road safety, but also involves family upbringing and parental responsibilities, so it cannot be dealt with just by having a one-ministry approach; it must be a multi-ministry approach.

“So one ministry, if you just look at one aspect, it will not solve the problem, how do you regulate in terms of parental responsibility. The Transport Ministry cannot regulate in terms of whether or not the children can come out at night. So that is not under the purview of the Ministry of Transport,” he told reporters yesterday when met after his engagement session as newly-selected DAP secretary-general with party grassroots.

Loke was asked about his recommendations to ensure safety and prevention of accidents in relation to basikal lajak.

While noting that road safety is an important aspect, Loke advocated a multi-ministry task force to look into the basikal lajak issue, such as to consider matters involving parental control.

“So these kinds of issues must be dealt with, I think, holistically. It must involve not only the Ministry of Transport, but also the police, Ministry of Women, Family and Community Development, and others.

“It cannot be a one-size-fits-all kind of approach to handle the problem. It’s a complex issue. It’s not just about road safety, it involves the family institution,” he added.

Asked about what was done during his tenure as transport minister previously in relation to basikal lajak, Loke said instructions were given for a study to be made.

“During our time, we started to ask the JPJ (Road Transport Department), and Miros (Malaysian Institute of Road Safety Research) to initiate a study on how to strengthen the regulations.

“But of course, the Ministry of Transport itself cannot come up with a comprehensive policy on that, so it needs more than that.

“So I think the issue of basikal lajak is indicative of a larger problem in society. It’s not just about basikal lajak.

“I think the government must take a more constructive approach in terms of having a Cabinet committee to look into the issue, not just basikal lajak but in terms of behaviour of the child, parents’ responsibilities and safety for road users,” he said, noting for example, there would also be issues such as the kind of protection afforded to drivers who find themselves facing large numbers of “mat rempit” on the road.

Mat rempit typically refers to those using motorcycles for purposes such as illegal street races.

The issue of basikal lajak became a hot topic recently, following the High Court’s decision to convict and sentence Sam Ke Ting to six years’ jail over the 2017 deaths of eight teenagers who were riding basikal lajak at around 3am on a poorly-lit highway.

On April 13, the High Court reversed the previous acquittal of Sam over a reckless driving charge, sentencing her to imprisonment without allowing bail and also to a RM6,000 fine and three-year driving ban upon completion of her prison term.

Sam was charged with reckless or dangerous driving, resulting in the death of the eight cyclists through an accident which happened at 3.20am in 2017 at Jalan Lingkaran Dalam, Johor Baru.

The accident reportedly involved a group of 30 teenagers, who were riding basikal lajak.