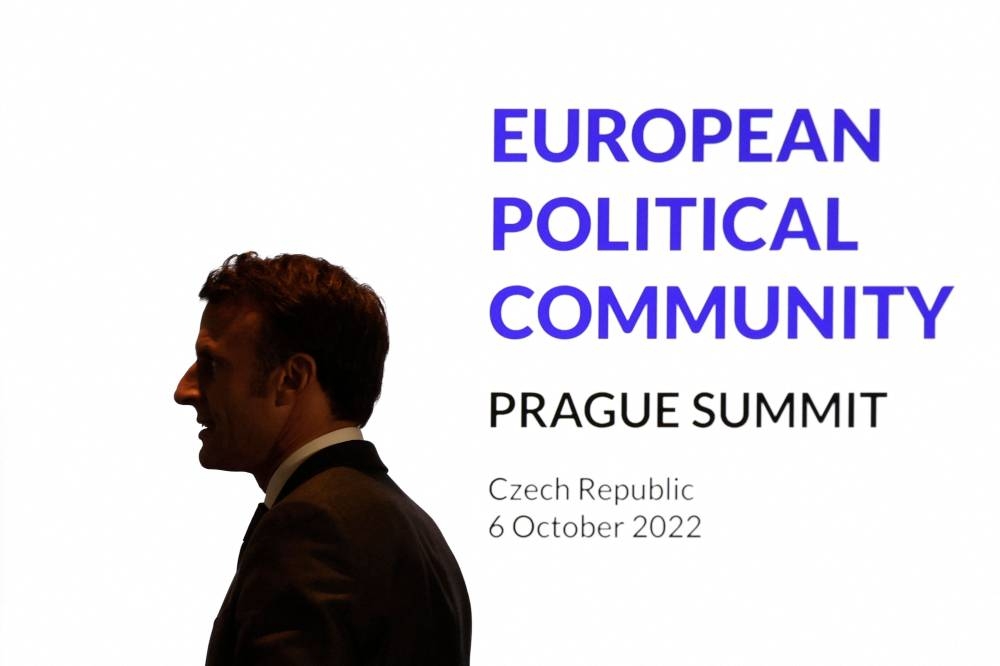 French President Emmanuel Macron leaves after a press conference with Czech Prime Minister and Moldova’s President Maia (not on picture) during the European Summit in Prague on October 6, 2022. — AFP pic

PRAGUE, Oct 7 — Leaders from across Europe met Thursday in Prague for the inaugural summit of a new forum aimed at bringing the continent together in the face of Russia’s aggression, with Ukraine’s president urging more support for Kyiv.

The first gathering of the “European Political Community” at the grand Prague Castle complex brought together a disparate grouping of 44 nations from the Caucasus in the southeast to Iceland in the northwest.

Russian President Vladimir Putin, who was not invited, loomed over the meeting as discussions focused on the economic and security turmoil sparked by his invasion of Ukraine.

“We displayed the unity of 44 European countries which as 44 very clearly expressed their condemnation of Russia’s war and their support for Ukraine,” French President Emmanuel Macron said.

The experimental format — a brainchild of Macron — was billed as a “new platform for political coordination”, but there were few concrete outcomes beyond a photo of the assembled leaders.

“If you just look at the attendance here, you see the importance,” said Belgian Prime Minister Alexander De Croo.

“The whole European continent is here, except two countries, Belarus and Russia. So it shows how isolated those two countries are.”

“Here and now, I urge you to make a basic decision. A decision about (the) purpose for this community of ours. For this format of ours,” Zelensky said.

There was scepticism over the purpose of the one-day event as there are deep disagreements — even open conflict — among some of the participants.

But leaders agreed to give it another try and announced that Moldova would host the next edition of the summit in spring, followed by Spain and Britain.

Convincing major powers beyond the European Union to show up was already a victory for the initiative.

British Prime Minister Liz Truss, a fierce supporter of the UK’s independent path since Brexit, had some respite from a disastrous start to her tenure at home on one of her first trips abroad since taking office.

Truss — who has clashed with Brussels over the post-Brexit deal on Northern Ireland — was keen to stress that the meeting was not an “EU construct” as she focused on migration, energy and security.

“It is very important that we work with our neighbours and allies to face down Putin but also deal with the issues we face,” she told UK broadcasters.

“This is not about moving closer to Europe.”

Much of the action from the summit happened on the sidelines as leaders grabbed bilateral meetings with their counterparts.

Truss called Macron a “friend” — far warmer words than she used during her bid for the top job when she said the “jury’s out” on the French leader.

“I do hope this is a new phase of our common relations, and this is the beginning of the day after,” Macron responded.

Far more fraught was a meeting involving the leaders of Armenia and Azerbaijan after clashes between the foes last month that killed 286, in the worst violence since a 2020 war.

The sit-down with Macron and EU chief Charles Michel came as the two sides look to draft the text of a future peace treaty despite deep mutual mistrust.

Erdogan’s participation had raised some hackles with Greece and Cyprus — which have long-standing disputes with Ankara — and those who see him as too authoritarian.

Erdogan claimed Greek leader Kyriakos Mitsotakis had walked out during his speech at the dinner, but an EU official said he had remained throughout.

Countries pushing to join the EU — Ukraine, Georgia, Moldova and the Western Balkan nations — have welcomed the community initiative, but were on their guard about it being an alternative to membership.