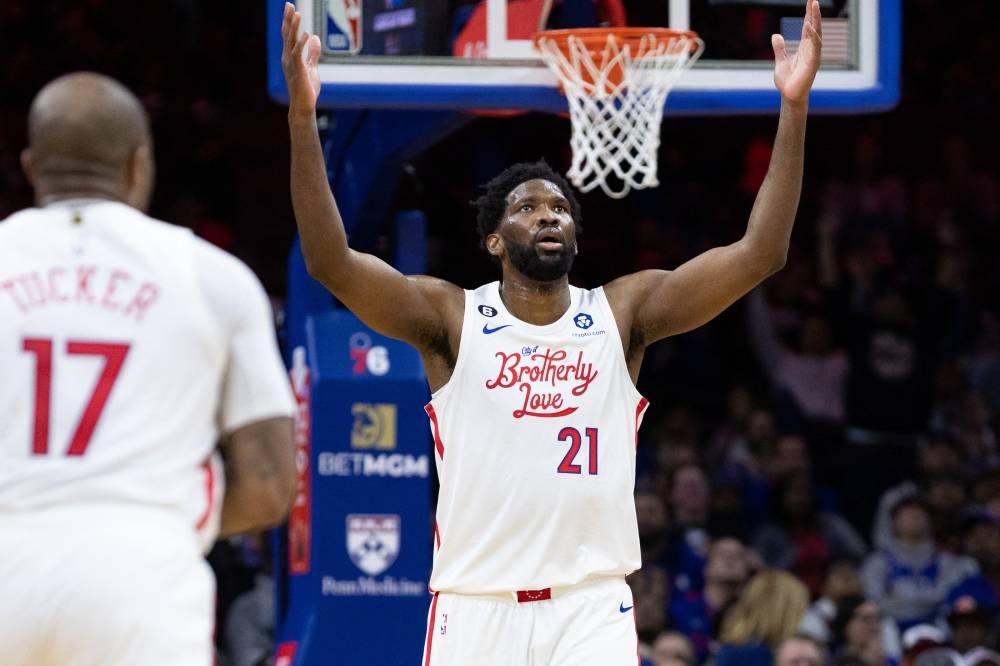 LOS ANGELES, Nov 14 — Joel Embiid scored 59 points to carry the Philadelphia 76ers to a 105-98 victory over Utah on Sunday, just one of two 50-point performances that lit up the NBA night.

Cleveland guard Darius Garland scored 27 of his 51 points in the fourth quarter, but his heroics weren’t enough to prevent the Cavaliers from surrendering their first defeat on their home floor, 129-124 to the Minnesota Timberwolves.

Embiid’s epic, which improved on his prior career best of 50 points, proved to be all the 76ers needed to hold off the tenacious Jazz.

The Cameroonian big man added 11 rebounds and eight assists along with seven blocked shots, all just a day after he scored 42 points in a victory over the Atlanta Hawks.

“I’ve never seen a more dominating performance, when you combine defense and offense,” 76ers coach Doc Rivers said after Embiid became the first player in league history with 50 points, 10 rebounds, five assists and five blocks in a game since blocks became an official statistic in the 1973-74 season.

With the Jazz pressing late, Embiid scored 26 of Philadelphia’s 27 points in the fourth quarter.

Chants of “M-V-P” were raining down at the Sixers’ Wells Fargo Center as Embiid poured it on.

The teams were tied heading into the final period, and Embiid’s turnaround jump shot with less than six minutes remaining knotted the score at 94-94.

He hit two free throws on Philadelphia’s next possession for a 98-96 Sixers lead. His fadeaway jump shot with a minute remaining put Philadelphia up 103-98 and he closed out the scoring with a pair of free throws.

In Cleveland, Garland barely beat Embiid to the first 50-point performance of the season as he became the fourth Cavaliers player to hit the half-century mark along with LeBron James, Kyrie Irving and Walt Wesley.

Garland’s 10 three-pointers — six in the fourth quarter — were just the start as Garland dazzled with an array of agile jump shots and bullish drives to the basket.

Cavs star Donovan Mitchell was cheering from the bench as he sat out with a sore ankle, but Garland’s career night wasn’t quite enough.

D’Angelo Russell scored a season-high 30 points on 11-of-13 shooting and handed out 12 assists, while Karl-Anthony Towns scored 29 points for the Timberwolves, who led by 24 late in the third quarter.

Elsewhere, the Oklahoma City Thunder rolled into New York and thumped the Knicks 145-135 to the vocal dismay of the Madison Square Garden crowd.

Shai Gilgeous-Alexander scored 37 points and Josh Giddey had a triple-double of 24 points, 10 rebounds and 12 assists to lead the young Thunder squad.

Australia’s Giddey, 20, joined Wilt Chamberlain as the only players to post triple-doubles in their first two games at the iconic Manhattan arena.

“We come here once a year, so you’ve got to have fun while we’re here and luckily in my time we’ve had two wins, so it’s been going good so far,” Giddey said in a post-game interview.

Lu Dort also scored 24 points for Oklahoma City, who connected on 62.5% of their shots from the field. That included making 17 of 31 from three-point range.

The Knicks out-scored the Thunder 48-36 in the first quarter, setting a franchise record for points in the first period.

But Oklahoma City buckled down defensively in the second, holding the Knicks to 25 and scoring 43 to lead by six at the break.

They never trailed and led by as many as 19 in the second half.

In Washington, Kristaps Porzingis scored 25 points and Deni Avdija chipped in 21 to lead the Wizards to a 102-92 victory over the Memphis Grizzlies.

Washington notched a fourth straight victory despite the continued absence of Bradley Beal. The Grizzlies were short-handed as well, with Ja Morant sidelined by a sore left ankle and Desmond Bane out with a troublesome toe. — AFP