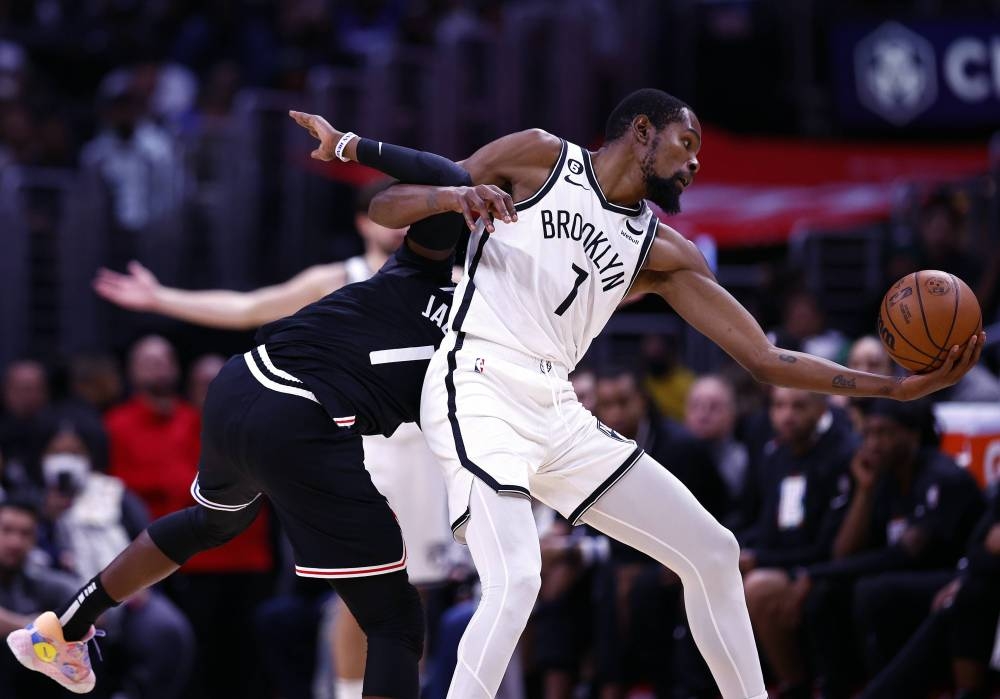 Kevin Durant #7 of the Brooklyn Nets is fouled by Reggie Jackson #1 of the LA Clippers in the second half at Crypto.com Arena on November 12, 2022 in Los Angeles, California. — Ronald Martinez/Getty Images/AFP pic

LOS ANGELES, Nov 13 — Kevin Durant and the Brooklyn Nets clamped down defensively in a 110-95 NBA victory over the Los Angeles Clippers on Saturday, their fourth win in the five games since Kyrie Irving was suspended.

As the Nets’ resurgence continued despite turmoil, the Boston Celtics notched a sixth straight victory, Jayson Tatum’s 43 points and 10 rebounds fuelling a 117-108 win over the Pistons in Detroit.

Star guard Irving was suspended for at least five games by the Nets after using social media to publicize a film widely condemned as anti-semitic.

Although he has now sat out five games, Nets coach Jacque Vaughn said before Saturday’s contest that Irving would not return for Sunday’s clash with the Lakers.

“We’re obviously missing (Irving) and we’ve got to look where those points are going to come from,” Durant said after the Nets opened their Southern California sojourn with a hard-fought victory. “I think guys are doing that as a group.”

Reserve Seth Curry scored 14 of his 22 points in the fourth quarter as the Nets finally put the back-and-forth battle away.

Durant, 34, is the first player to start a season with 13 straight games scoring at least 25 points since Michael Jordan had 16 25-point games to open the 1988-89 campaign.

He’s made sure the Nets have weathered the absence of Irving, as well as the continuing struggles of Ben Simmons, who came off the bench and scored just one basket.

“We hung our hat on just staying in front of our man and making them shoot tough shots over us,” he said after the Nets held Clippers star Paul George to just five-of-12 shooting and 17 points.

Center Ivica Zubac scored 16 points and grabbed 15 rebounds and Marcus Morris added 13 as the Clippers kept the pressure on until the Nets put together a late 18-2 scoring run.

“Even though we didn’t make shots (early) I felt like we were generating good shots, too, so eventually they were going to start to fall,” Durant said.

Defence has been a focus since Vaughn took over when Steve Nash was sacked this month — part of a tumultuous stretch for the club that included the furore surrounding Irving.

While the likely date of seven-time All-Star Irving’s return remains unknown, his situation appeared to be heading toward a resolution after both NBA commissioner Adam Silver and Nets owner Joe Tsai said this week they’d had productive talks with the player.

In Detroit, the Celtics overcame the injury absences of second-leading scorer Jaylen Brown, Al Horford and Malcolm Brogdon to beat the Pistons for the second time in four days.

A tight first half ended with the Pistons up by two points, but Tatum came alive in the second half, scoring 28 points after the break.

Back-to-back three pointers from Tatum gave Boston a 106-97 lead midway through the fourth, then teammate Marcus Smart came up with a steal and drove for a layup as Boston took control and improved to 10-3.

Elsewhere, the Miami Heat spoiled the season debut of LaMelo Ball with a resounding 132-115 victory over the Charlotte Hornets.

Former Rookie of the Year Ball had missed Charlotte’s first 13 games with a sprained left ankle.

He scored 15 points in 28 minutes on court, but he and the Hornets were no match for a Miami team led by 31 points from Max Strus.

In Philadelphia, Joel Embiid scored 42 points and grabbed 10 rebounds to lead the 76ers to a 121-109 victory over the Hawks, avenging a defeat in Atlanta on Thursday.

In Washington, Kristaps Porzingis delivered a double-double of 31 points and 10 rebounds as the Wizards notched a third straight victory, 121-112 over the Utah Jazz.