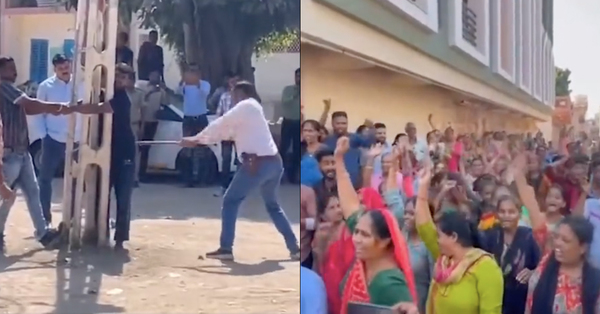 The public flogging of the men from the minority community took place in the town square of a city in the western Indian state of Gujarat, the home state of India’s Prime Minister Narendra Modi.

At least five Muslim men were held, one after the other, by a group of police officers in plainclothes against the electricity pole and flogged with a cane (rotan) while a number of uniformed officers stood guard.

Those being flogged were seen writhing in pain and begging for mercy. However, the plainclothes officers continued to flog the Muslim men. They were heard, in Gujarati Bahasa, saying that they are sorry.

A huge crowd that was watching the flogging cheered on and hailed the officers.

The crowd, which included women and children, also shouted ‘Bharat Mata Ki Jai’, meaning “victory for Mother India”, a slogan of the Indian Army that has come to be misused by Hindu right-wingers to construct a militant idea of India that excludes millions of Muslims among other minorities in the country.

A local politician alleged that Muslims had pelted stones at Garba, a community dance event held during Navratri, a Hindu religious festival

The Garba was organised outside a temple, which shares a wall with a mosque.

The local politician, Indravadan Patel, who is the elected head of the town, told The Indian Express that he organised the community dance event to fulfil an election promise he made last year.

“I had taken a pledge during the 2021 panchayat elections that I would organise the Garba for one night of Ashtami (eighth day of Navratri) at the temple. The village has a separate Garba for locals every day. However, they (Muslims) did not want us to carry on,” he was quoted as saying by the English newspaper.

Another English newspaper, Deccan Herald, reported a district-level senior police official as saying that the Muslim community objected to the Hindu religious event as it was adjacent to the mosque.

A heated argument ensued, which turned into a brawl, and stones were pelted, Rajesh Gadhia said.

However, a politician from the Muslim community claimed that the stone-pelting occurred over a “misunderstanding that a riot had broken out”, as there were loud shouts and screams during the Garba.

“Some stones were pelted from both sides and it blew up into a big clash. While we were at the police station trying to have a cross report lodged, we also heard that the police had assaulted some of the arrested accused in public. We will take legal recourse if the police department does not initiate disciplinary action on this matter,” Abdul Karim Malek, president of Madhya Gujarat Muslim Samaj Seva Samiti, said.

Police later identified and booked a total of 43 Muslims. Of these, 10 men were arrested and five were brought to the spot where the Garba was held and punished in public for allegedly disrupting and rioting.

The Muslim men have been booked under various Indian Penal Code sections, including an attempt to murder, unlawful assembly, rioting, rioting armed with a deadly weapon likely to cause death, and deliberate and malicious acts intended to outrage religious feelings by insulting religion or religious beliefs.

Harsh Ramesh Sanghavi, who is the Minister of State for Home in the ruling BJP government, appeared to condone the police action

According to Sanghvi, the Muslim community had attempted to disturb the Hindu religious festival.

“This was an attempt to disturb a religious festival by a certain kind of people. Some anti-social elements tried to break the peace. I want to say that in Gujarat anyone who behaves will not be troubled,” he said.

Meanwhile, Ashish Bhatia, who is the director-general of Gujarat police, has ordered an inquiry to ascertain the video’s genuineness

“We have ordered an inquiry after taking cognisance of the video,” Bhatia told Deccan Herald.

An opposition leader has also demanded that the officers in the video be suspended.

“The police pinned the accused to the electricity pole and thrashed them with sticks while the public applauded. The officials who took the law into their own hands should be immediately suspended,” he said.

Image via The Indian Express