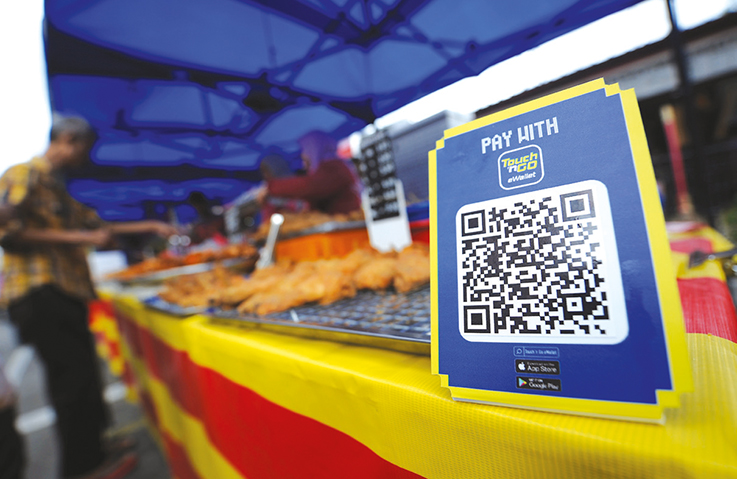 THE Covid-19 pandemic has accelerated the adoption of electronic money (e-money) payments in Malaysia, with transaction value crossing RM20 billion between January and September, as shown in the latest data released by Bank Negara Malaysia (BNM).

E-wallet providers are seeing higher take-up during the movement restrictions period as consumers embrace contactless payment as a safer mode amid the spread of the Covid-19.

Touch ‘n Go eWallet saw over 10-fold increase in its user base throughout 2020 and a positive curve skewing towards wider acceptance market and segments.

He said Touch ‘n Go eWallet, one of the official e-wallet partners of the e-Tunai Rakyat, recorded over 70% of eligible Malaysians claiming the credit via the platform.

“When the Movement Control Order (MCO) was implemented, we knew we had to take a different approach with our business. We started to pivot our offline business and grow our online segment to address the immediate needs of the nation in the essential goods segment.

“Through this move, we can see that more of the rakyat, across various walks of life, have become increasingly comfortable in adopting the cashless lifestyle with Touch ‘n Go eWallet — as it’s safer, cleaner and much more convenient.

It is worth noting that the overall uptake across the board, be it users or merchants, has further synergised our ecosystem,” Ong told The Malaysian Reserve (TMR) recently.

He said there has been a steady rise in merchants onboarding onto Touch ‘n Go eWallet payment platform ever since MCO was implemented, even more so with Ramadhan observed in a different manner this year.

Touch ‘n Go eWallet has a network of more than 15 million users, mapped to over 250,000 merchant acceptance points nationwide across multiple sectors, including online and offline merchants, small and medium enterprises, food and beverage, groceries, transportation and more.

Boost CEO Mohd Khairil Abdullah said the e-wallet platform saw a good recovery of almost 30% after the initial months of MCO in its gross transaction value (GTV), signalling positively that customer behaviour is ready to shift.

“We expected to see further increase in online and offline-to-online e-wallet payments adoption with the resumption of social and business activities under the Recovery MCO. This was validated when we saw our GTV recorded further growth to almost 60% to date,” Mohd Khairil told TMR recently.

He said the pandemic is clearly a catalyst for the acceleration of digital payment usage. Evidently, Boost data showed Malaysians have significantly shifted their payment behaviour and see e-wallets as a reliable, safe and convenient payment method.

Boost currently has over 8.8 million users and over 205,000 merchants nationwide, including a strong footprint in Sabah and Sarawak.

Mohd Khairil said Boost is targeted to reach 10 million users and over 220,000 merchants by year-end.

The RM20.8 billion in value was RM8.7 billion higher than the RM12.1 billion registered in the same 9M period last year, representing a 71.9% year-on-year (YoY) jump, despite a lower volume seen.

The volume of e-money transactions for the January-September period contracted by 164.9 million transactions, or 10.8% YoY, to 1.37 billion from 1.53 billion last year, attributable to significantly lower volume recorded in April and May during the MCO period.

The volume of e-money transactions ranges from over 128 million to 200 million monthly this year, but the months of April and May only saw 46.5 million and 96.3 million transactions respectively.

The central bank defined e-money as a payment instrument that contains monetary value, paid in advance by the user to the e-money issuer.

The user of e-money can make payments for purchases of goods and services to merchants who accept the e-money as payment.

The post Covid-19 continues to fuel e-wallet appeared first on The Malaysian Reserve.