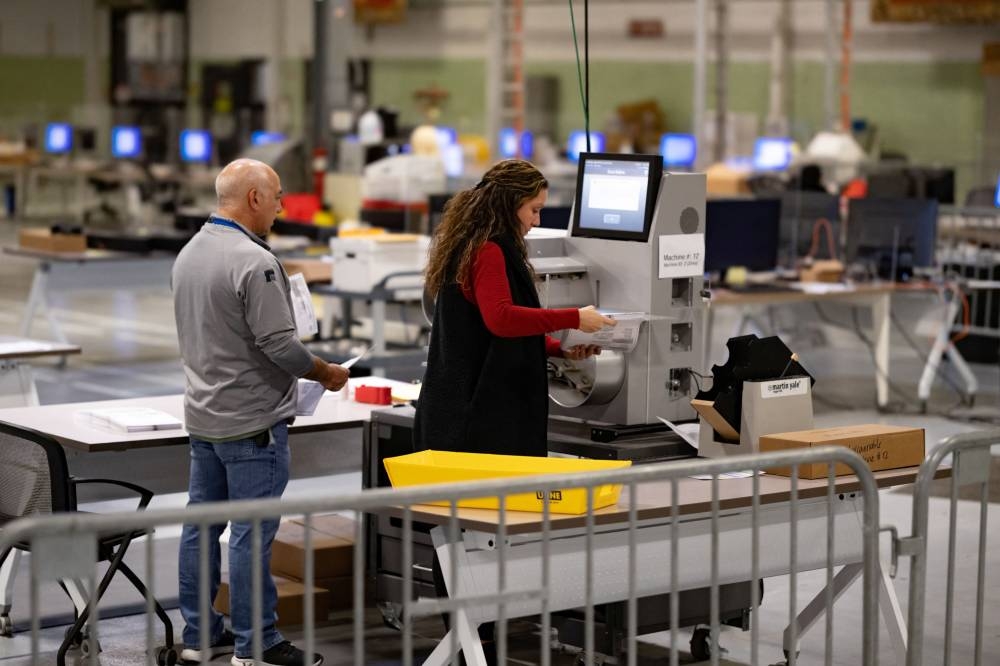 A worker prepares to scan ballots cast during the 2022 US midterm election in Philadelphia, Pennsylvania November 10, 2022. – Reuters pic

PHOENIX, Nov 11 – Two days after Americans went to the polls, control of both houses of the US Congress remained up in the air, with 31 seats in the House of Representatives too close to call and hundreds of thousands of ballots still being counted in the key battleground state of Arizona, officials said.

Republicans have captured at least 211 House seats, Edison Research projected, seven short of the 218 needed to wrest the House away from Democrats and effectively halt President Joe Biden’s legislative agenda.

While Republicans remain favoured to win a majority in the House, the 31 House contests yet to be decided include 19 of the most competitive, based on a Reuters analysis of the leading nonpartisan forecasters – likely ensuring the final outcome will not be determined for some time.

The fate of the Senate – where the two parties are neck and neck – was even less certain, with too-close-to-call races in both Nevada and Arizona. A run-off for the Senate seat in Georgia is scheduled for next month.

In Arizona, Bill Gates, chairperson of the Maricopa County Board of Supervisors, told CNN that a little over 400,000 votes were still uncounted in the county, the state’s most populous, as of Thursday afternoon.

Even a slim House majority would allow Republicans to shape the rest of Biden’s term, blocking priorities such as abortion rights and launching investigations into his administration and family.

The party in power historically suffers heavy casualties in a president’s first midterm election and Tuesday’s results suggested voters were, at least in part, punishing Biden for the steepest inflation in 40 years.

But Democrats were able to avoid the major defeat that Republicans had anticipated as voters went to the polls in high numbers to protect abortion rights, under threat since the Supreme Court overturned constitutional protections in June.

“Women in America made their voices heard, man,” President Joe Biden said at a political event in Washington.

The president had framed the election as a test of US democracy at a time when hundreds of Republican candidates embraced former President Donald Trump’s false claims that the 2020 presidential election was stolen.

At the political event, Biden noted that many so-called “election deniers” had accepted their own losses.

Biden, who travels to Egypt yesterday for the COP27 UN climate change summit, has said he is prepared to work with Republicans.

A White House official said Biden spoke by phone with Republican House leader Kevin McCarthy, who announced on Wednesday his intention to run for speaker of the House if Republicans control the chamber.

If McCarthy is the next House speaker, he may find it challenging to hold together his fractious caucus, with a hard-right wing that has little interest in compromise.

Republicans are expected to demand spending cuts in exchange for raising the nation’s borrowing limit next year, a showdown that could spook financial markets. – Reuters