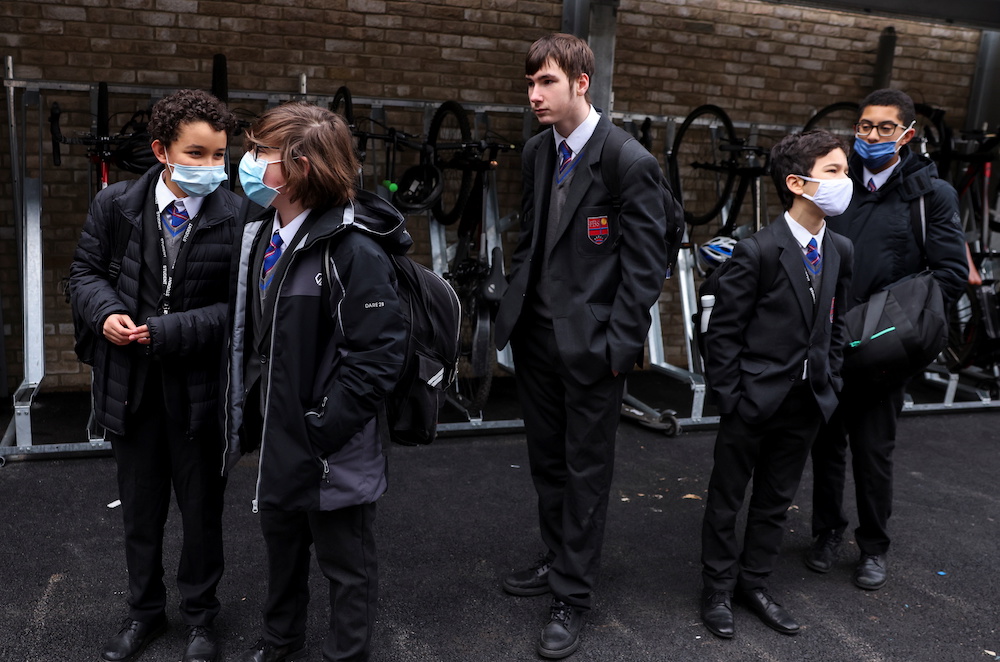 Data released on Thursday showed that 28.8 per cent of children aged 12-17 had received a Covid-19 shot. — Reuters pic

LONDON, Oct 19 – The spread of Covid-19 among children in England is fuelling a recent rise in cases nationally and causing concern among some scientists that vaccines are being rolled out in schools too slowly, risking the welfare of children and adults alike.

Covid-19 cases in Britain as a whole are much higher than in other European countries and are rising. On Friday one survey suggested prevalence was at its highest level since January, with 8 per cent of secondary school children infected.

Vaccination rates for the age group in England are lagging those in many European countries and even Scotland, which some scientists have attributed to mixed messaging around shots for children, a later start and inflexibility with the rollout.

“The worry at the moment is it is clear that the vaccination programme in 12 to 15-year-olds is not going very well,” Lawrence Young, virologist at University of Warwick, told Reuters, adding that the spread of other viruses could lead to a “perfect storm” in the winter for the National Health Service if cases spread to older, more vulnerable adults.

“With all of what that means not only again for schools, but also for overwhelming the NHS… then the worry is that autumn and winter are going to get very, very messy.”

Last month, Britain’s chief medical officers recommended that children aged 12 to 15 should be offered a Covid-19 vaccine to help reduce disruption to their education.

But with children and teachers missing school time having caught Covid, some believe the rollout started too late.

“The final approval to go ahead with this was about protecting education and we’re not doing that,” Young said.

The health service set a target of offering all children vaccination shots by the school half-term break, which starts next week.

Data released on Thursday showed that 28.8 per cent of children aged 12-17 had received a Covid-19 shot.

The recommendation to vaccinate those children was delayed after the Joint Committee on Vaccination and Immunisation (JCVI) declined to recommend broad vaccination of over-12s, saying the benefit to health was marginal and referring the decision to the chief medical officers.

Whether or not vaccines prevent mild Covid and transmission in schools in light of the more contagious Delta variant is one major point of difference between those who believe vaccinations should have begun earlier and the JCVI, which says a deliberate and transparent process was crucial to maintaining trust.

“The extent to which we could have modified the situation, or indeed are now modifying this situation, by immunising children always was going to be and remains modest,” Adam Finn, a JCVI member, told Reuters.

“We shouldn’t imagine that somehow we missed the boat on some dramatic effect that would have been beneficial to children or everyone else, because the vaccines just don’t (prevent transmission) very efficiently, particularly with the Delta variant.”

Finn said that as the risks of both infection and the shots were small, it was right that children and parents should be able to decide for themselves whether to get the shot, and said the focus should not be on the overall proportion who decide to take up the offer.

“We allowed people to make their own decision in a rather marginal situation whether or not they wanted their children immunised. Those that did went ahead, which is fine. Those that didn’t go ahead, and that’s fine too.”

However, the rollout in England is being done through schools, meaning the offer of a vaccine isn’t being made available to all eligible children at the same time.

In Scotland, by contrast, where 46.5 per cent of 12- to 15-year-olds have had a Covid shot, walk-in vaccination facilities are available, meaning children are not reliant on schools to get access to shots.

The government is considering allowing children aged 12-15 to get their shots in walk-in clinics in England, the Mail on Sunday reported, saying the change would happen within weeks.

Dr Brian Ferguson, of the University of Cambridge’s Division of Immunology, said that while it was natural there would be a lower take-up in children, he was concerned that not all children who wanted shots in England currently had access to them.

“The problem at the moment is that you have a slow rollout of this process, in the time when you also have a high case-rate in that age range,” he told Reuters.

“That’s causing problems with getting the vaccines to children who want to have the vaccines… That I think is a foreseeable problem that could have been avoided.” – Reuters