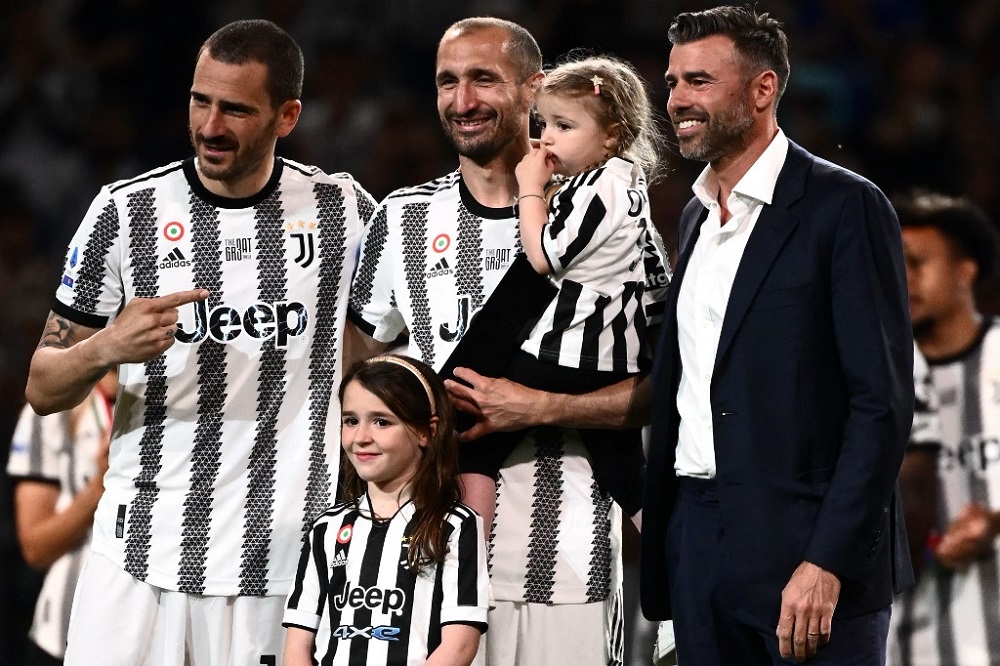 Juventus’ Italian defender Giorgio Chiellini (centre) poses with his children, Leonardo Bonucci (left) and Juventus’ former Italian player Andrea Barzagli as the stadium pays tribute to Chiellini for his last match with the Juventus team at the Allianz Stadium in Turin May 16, 2022. — AFP pic

TURIN, May 17 — Giorgio Chiellini bid farewell to Juventus fans yesterday 2-2 draw which earned Lazio a place in the Europa League after Sergej Milinkovic-Savic levelled with the last kick of the game.

Fans chanted “there’s only one captain” as a giant choreography depicting his shirt number ‘3’ was displayed in the stands ahead of the match and they then gave Chiellini a huge round of applause after he was substituted in the 18th minute.

The 37-year-old had played the full 120 minutes of Juve’s Italian Cup final defeat to arch rivals Inter Milan tomorrow, after which he announced that he would be leaving Juve after 18 years at a club where he has won nine league titles and a clutch of other trophies.

“It’s been an emotional day,” said Chiellini to DAZN, adding that he believes he can “still play at a high level of football”.

Following the announcement of his departure from Juve he said he would think about whether to hang up his boots after having already decided to retire from international football.

“I need to think about things. It’s a decision that can’t be made in a day.”

When he left the field he handed his captain’s armband to another player on the way out — Paulo Dybala.

Argentina international Dybala, who has been at Juve since 2015, will leave at the end of the season after the club decided not to renew his contract after a verbal agreement with the 28-year-old struck in the autumn was publicly rejected by the club earlier this year.

Dusan Vlahovic did the Argentine’s “mask” celebration when he headed in the opener in the 10th minute, and when Dybala was substituted with 12 minutes remaining, with the hosts leading 2-1, he did a tour of the stands and was embraced by fans while he tried to hold back the tears.

Juve looked to be cruising to a routine home win to honour their two departing heroes when Alvaro Morata doubled the hosts lead in the 36th minute.

However Alex Sandro poked into his own net five minutes after the break and Maurizio Sarri’s Lazio pushed for a leveller which came in the 95th minute, Milinkovic-Savic rifling past Mattia Perin from a tight angle to give Lazio a spot in Europe’s second-tier competition.

“For next year we will need a few players in order to aim towards the Champions league,” said Milinkovic-Savic, who has been linked with a move away from the Roman club in the summer.

They sit fifth in one of two Europa League places, four points away from seventh-placed Fiorentina, who were hammered 4-1 at a Sampdoria side in party mood.

Samp were guaranteed their top flight status on Sunday after Cagliari were beaten 3-1 by title-chasing Inter Milan, leaving Marco Giampaolo’s side four points above the drop zone before they kicked off in their penultimate fixture of the season. — AFP