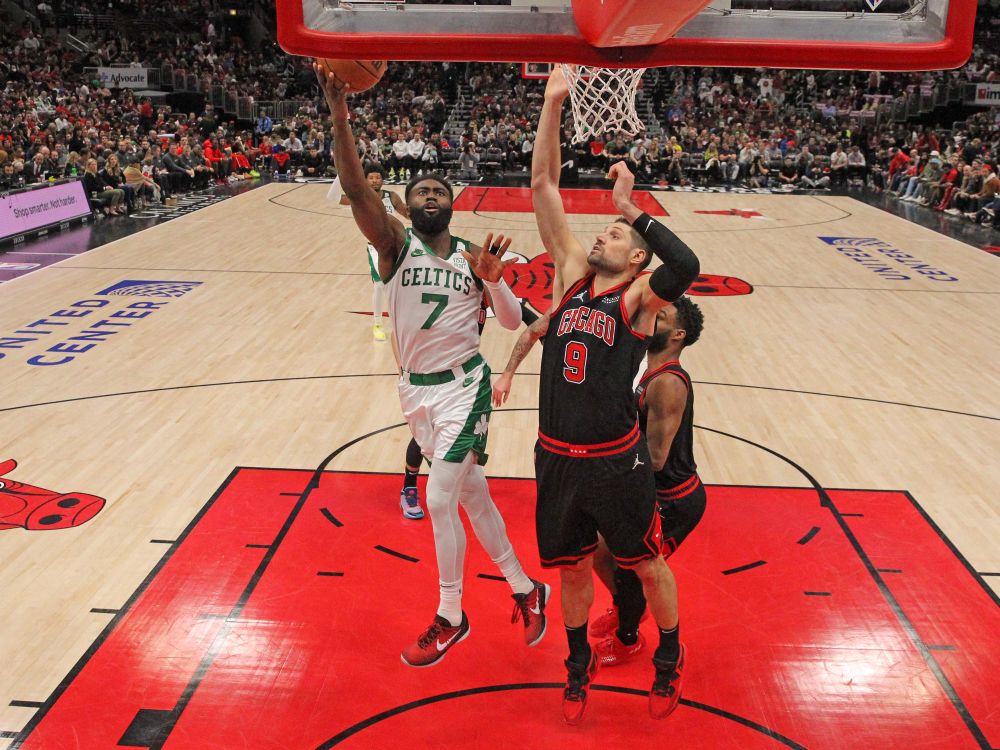 LOS ANGELES, April 7 — Jaylen Brown scored 25 points on Wednesday as the Boston Celtics kept up their push for the number two playoff seed in the Eastern Conference with a 117-94 victory over the Chicago Bulls.

With the identity of the six automatic playoff teams in the East already settled, the only issue remaining is to determine the final playoff seedings.

Boston sits behind leaders Miami with two games remaining in the regular season.

With Miami poised to lock up the top spot, needing just one win from their games against Atlanta and lowly Orlando, all eyes are on the battle for second seed where Boston, the Milwaukee Bucks and the Philadelphia 76ers are in a three-way tussle.

Milwaukee and Philadelphia’s wins on Tuesday left all three teams locked on 49 wins apiece, meaning the Celtics’ 50th win of the season on Wednesday allowed them to move one game clear of their rivals.

Brown spearheaded a dominant performance for the in-form Celtics, who led from start-to-finish and had five players in double figures.

Al Horford weighed in with 17 points and 10 rebounds while Jayson Tatum finished with 16 points, 10 rebounds and eight assists as the Bulls — occupying the sixth and final automatic playoff spot in the East — fell to a third straight defeat.

“We just came out with a lot of energy,” Horford said afterwards, revealing the team is determined to maintain their form after center Robert Williams sustained a serious knee injury last month.

“We understood it was an important game for us, we wanted to get back to the way we’ve been playing before Rob went down. We came out with a lot of good energy tonight and were able to sustain it for the whole game.

“For the past month we’ve been playing playoff-level basketball. This is what I expect from our guys.”

The Celtics’ victory marks the first time since the 2017-2018 campaign that the franchise has posted 50 wins – a source of pride for Boston coach Ime Udoka after his team’s sluggish start to the season.

“When I signed on here it was pretty much a given that we were going to win 50 games, that’s the expectation,” Udoka said. “It’s a good thing to get back to where we expected to be.”

Elsewhere in the East, the Brooklyn Nets overturned a 21-point third quarter deficit to down the New York Knicks 110-98 at Madison Square Garden, outscoring their city rivals by 38-16 in the final quarter to clinch victory.

Kevin Durant led the way back for Brooklyn with a 32-point triple double that included 11 assists and 10 rebounds while Kyrie Irving tallied 24 points with eight rebounds and seven assists.

Brooklyn, who are assured of a place in the play-in tournament next week, improved to 42-38.

But for Nets star Durant, Brooklyn’s thrilling comeback was too close for comfort.

“It’s risky, I hate being down like that,” Durant said afterwards. “I hate being that team, you know, get down, and we fight back. I don’t want that to be a part of who we are.

“But that situation may come and for us it’s about sticking together, making the right play regardless of the score. That’s what we leaned on tonight. We had a good spirit in that second half.”

In the Western Conference, the playoff-bound Dallas Mavericks brushed aside the eliminated Detroit Pistons with a 131-113 win.