Carlsberg Gets Over 1,200 Music Festival-Goers To Pledge To Drink Responsibly 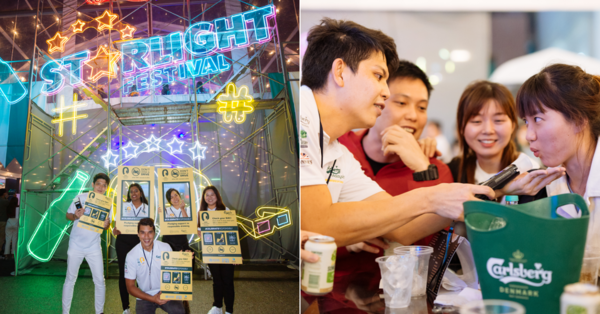 With music festivals now back in full force after being paused during the pandemic, Carlsberg Malaysia has stepped up to advocate for the importance of responsible drinking by rolling out a month-long #CelebrateResponsibly campaign

Having run for eight consecutive years, the annual #CelebrateResponsibly campaign reiterates Carlsberg Malaysia’s commitment towards the worldwide Global Beer Responsible Day to promote the culture of responsible drinking. It is also held in support of the International Alliance for Responsible Drinking (IARD), a non-profit organisation that aims to reduce irresponsible drinking.

The #CelebrateResponsibly campaign is Carlsberg Malaysia’s flagship programme in delivering one of its sustainability priorities — ZERO Irresponsible Drinking. This is aligned with the United Nations Sustainable Development Group (UNSDG) Goal #3 to ensure healthy lives and promote well-being for all at all ages.

This year, Carlsberg Malaysia took the #CelebrateResponsibly campaign to festival grounds in order to directly reach out to those who consume alcohol at such events

The team of Employee Ambassadors at the Borneo Music Festival Live 2022 in Kuching.
Image via Carlsberg Malaysia (Provided to SAYS)

Many would certainly be familiar with three music festivals held this year — Borneo Music Festival Live 2022 in Kuching, the Neon Borneo Festival in Miri, and the Genting Starlight Festival at Genting Highlands.

It was at these festivals that Carlsberg Malaysia empowered 21 employees to take on the role of being #CelebrateResponsibly ambassadors. Their mission? To spread awareness on the legal purchasing age of alcohol, educate people on the national legal blood alcohol content (BAC) limit of 0.05%, and encourage people to get their BAC tested on the spot to change their mindset and behaviour about drink driving.

A party-goer testing her blood alcohol content level with a breathalyser.
Image via Carlsberg Malaysia (Provided to SAYS)

The campaign was a success, with over 1,200 festival-goers pledging to no driving under the influence of alcohol. They also had their BAC tested against the national BAC limit of 0.05% (50mg of alcohol in 100ml of blood).

Watch the video below for a look at what went down at the three music festivals:

In partnership with five e-hailing and chauffeur on-call service providers — Grab, Riding Pink, airasia Ride, Lailah, and Buddy Driver — and in collaboration with over 3,000 bars, bistros, and restaurants, they offered incentives in the form of discounted rides in order to encourage people to get a ride instead of driving after a night of drinking.

“With throngs of party-goers returning to festivals after having been cooped up indoors for the past two years, we took this opportunity to amplify our ZERO Irresponsible Drinking sustainability priority by encouraging our consumers to make responsible consumption decisions and change their mindset about irresponsible behaviours about excessive drinking and driving under the influence of alcohol, as advocated at our #CelebrateResponsibly campaign.

“In driving mindset and behavioural change, we equipped consumers with knowledge on one’s alcohol tolerance, of which factors affecting it are typically one’s body weight, gender, and age, as well as the tools to measure one’s BAC after drinking, against the country’s permitted BAC limits. In addition, we also made alcohol-free beverages like Somersby 0.0 available for sampling as we are cognizant of the change in drinking habits as more people opt for non-alcoholic brews.

“This year, Carlsberg beer celebrates its 175-year young birthday, while Carlsberg Malaysia is celebrating 50 years of local production of Carlsberg beer. For many years, we are committed to the craft of brewing the finest beers, stouts, and ciders with utmost care, pride, and quality.

“We want to share with our consumers the exemplary taste, quality, and natural ingredients used in our brews, not the intoxicating effects of drinking alcohol excessively or irresponsibly. With this, I invite all of our consumers to join us in advocating a #CelebrateResponsibly mindset and behaviour to safeguard our health, wellness, and accessibility to alcohol,” she said.

Festival attendees scanning a QR code to submit their pledge in support of ZERO Irresponsible Drinking.
Image via Carlsberg Malaysia (Provided to SAYS)

As a reminder, the legal drinking age in Malaysia is 21 years old. That means you need to be at least 21 and a non-Muslim in order to buy and consume alcohol. Remember to always drink responsibly and in moderation. Do not drink and drive. If you plan to drink, try carpooling with a friend who isn’t drinking or catch a cab instead of driving.