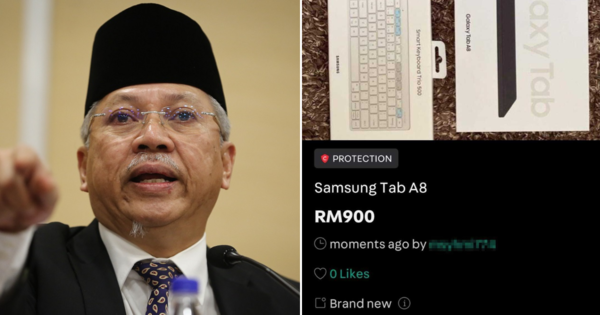 Besides locals chiming in to express their displeasure at this occurrence, multiple Malaysian politicians have stepped forward to condemn the actions of students who sold their sponsored tablets for upgraded versions, or to use the money for other purposes.

Among them include caretaker Communications and Multimedia Minister Tan Sri Annuar Musa, who affirmed yesterday, 25 October, at a meeting of the Special Task Force on Jihad Against Inflation that there were indeed cases of the PerantiSiswa tablets being sold online.

“Action will be taken against students who sell their PerantiSiswa tablets, such as by putting their names on display at the PerantiSiswa portal and notifying their universities of their activities,” as reported by Bernama.

According to the caretaker minister, 14 cases of the tablets being sold have been reported nationwide by the Domestic Trade and Consumer Affairs Ministry, who are still monitoring any new developments on the matter.

Screenshots of the tablets being sold on e-commerce websites.
Image via B40 Buat Perangai Apa Harini (Facebook)

Annuar stated that selling the devices were indeed irresponsible, and is similar to breaching a pledge they signed when they received the tablets

Known formally as the Keluarga Malaysia PerantiSiswa Programme, the initiative acted as part of the ministry’s contribution to help students and undergraduates from B40 households.

However, after reports of the tablets going on sale went viral on Monday, 24 October, Annuar revealed that all the tablets provided under the programme have tracking devices, to detect if they’ve been sold. “So far, several of the PerantiSiswa tablets have been blocked from use,” Annuar added.

Nonetheless, Annuar added that the ministry remains committed to continuing the distribution of the tablets to the approved applicants under the programme.

“I have set a target to complete the distribution by 31 November as the number of cases on sale of the tablets is relatively small,” he mentioned.

Other politicians have also come out criticising these students for selling their tablets, including MUDA president Syed Saddiq Syed Abdul Rahman

The former minister of youth and sports posted a video of himself on Twitter, expressly condemning the actions of those students, saying that there are a lot of other students from worse situations who need the tablets.

“The tablets are to be used for studying, not to be sold,” he began in his video.

Providing statistics to back up his claim, Saddiq noted that one in three students in Malaysia does not possess a laptop or a tablet, adding that the reports stagger in Borneo at 50% for the same measure.

“Please think of them. Some families who have requested for the tablets have not received them. When you sell your tablet, you are taking away an opportunity from someone without a tablet to receive one,” he said in his closing thoughts.

Watch the full video published by Syed Saddiq on Twitter below:

Meanwhile, in response to the ordeal, Annuar said the ministry will look into the possibility of a buy-back policy for recipients to sell their tablets back to the government if they no longer require them

“For those who no longer require the tablets, maybe we can introduce a buy-back policy after a year… I will look into it, it is better than having them sell the tablets at a lower price,” he added.

Locals also expressed their dissatisfaction at the students who sold their tablets online: