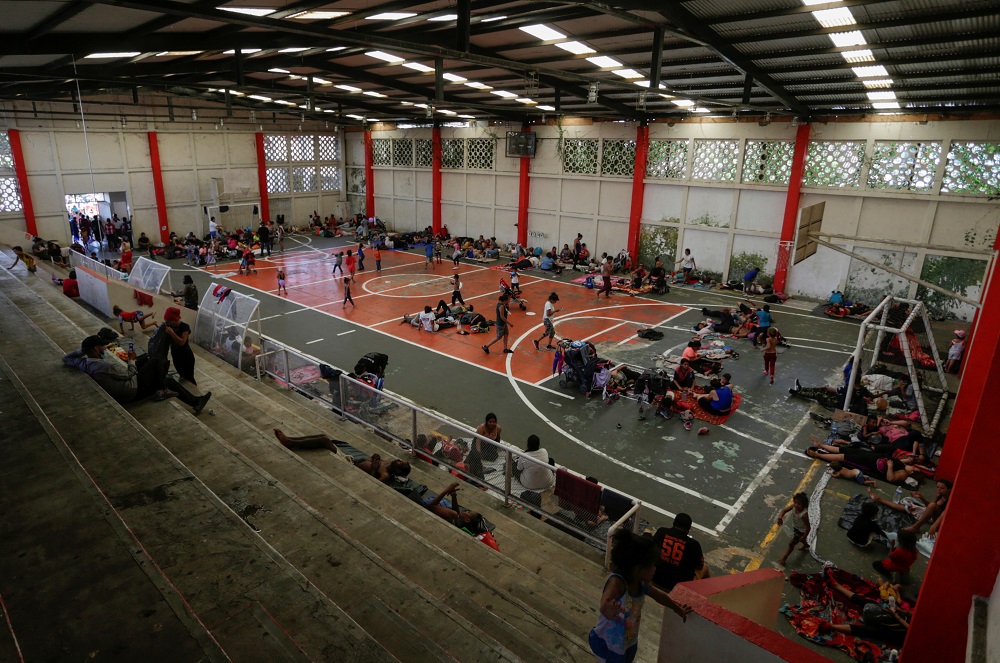 Migrants rest in a sports court as they take part in a caravan heading to Mexico City, in Villa Comaltitlan, Mexico October 27, 2021. – Reuters pic

VILLA COMALTITLAN (Mexico), Oct 28 – Thousands of mostly Central American migrants trekking across southern Mexico yesterday advanced only a short distance, with children and painfully blistered feet, the latest human caravan seeking to reach either Mexico City or the US border.

The mass of men, women and children left the village of Huixtla early in the morning, walking about 10 miles (16km) north along a local highway to the town of Villa Comaltitlan, in Mexico’s southern Chiapas state, witnesses told Reuters.

“We haven’t had any problems with immigration officials. God is opening doors for us,” said a hopeful Julio Gonzalez, a Honduran migrant who spent Tuesday night sleeping near a street in Huixtla with his wife and two children under a steady rain.

In Villa Comaltitlan, some migrants told Reuters they sought to rest before departing early this morning, which was especially important due to the large number of young children with them.

The latest migrant caravan has not yet faced off with Mexican migration agents or soldiers who have increasingly used tough tactics to stem the tide of fleeing migrants, many of whom want to escape violent gangs and grinding joblessness back home.

The United States has registered record levels of migration this year, as border agents have apprehended or expelled more than 1.7 million migrants over the past 12 months.

The majority of the latest caravan are families with young children, according to a witness who estimated at least 2,000 migrants had gathered on Tuesday in Huixtla to rest and receive medical attention before resuming their journey north.

Among them was Arleth Chavez from Guatemala, who had walked with the caravan for about 28 miles since it departed the southern border city of Tapachula over the weekend.

“My feet are burning and in pain from the blisters,” said Chavez, who nonetheless expressed a determination to continue.

Migrants have denounced the lengthy asylum process in Tapachula, located near Mexico’s border with Guatemala, and thousands have departed the city in a series of caravans this year, including many Haitians.

Mexico’s immigration agency INM said in a statement on Wednesday that some families in the caravan had asked to be returned to Tapachula, but did not provide numbers.

Many members of the caravan aim to reach Mexico City, where they hope the asylum process might be faster, while others say they seek to make it to the United States.

The US government has put pressure on Mexico to contain migrants before reaching the US border, and Mexican authorities have obliged by beefing up patrols. The caravan’s slow movement across Mexico comes as US President Joe Biden has been facing increasing criticism from Republicans over the high levels of migration, which comes amid widespread violence and growing hunger in Central America and parts of the Caribbean. – Reuters