“Can’t She Get Skinny Again?” — Man Vents About Wife’s Weight Gain After Having His Child 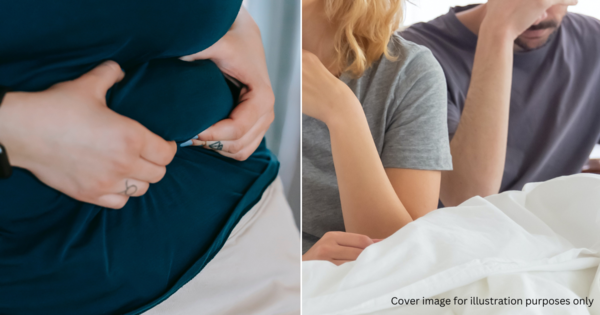 Marriage can be tough on couples who have a long road ahead of them, especially if they can’t find common ground on certain matters.

But what happens when a perceived problem by one of them, comes off rather insensitive to their spouse?

A recent tweet on Malaysian Twitter page, Emosi, revealed an anonymous confession by a man who is frustrated with the physical appearance of his wife.

Explaining his circumstance in the form of a direct message to the Twitter page, he requests that his name be hidden from the public, so as to vent his feelings freely, while also seeking advice from anyone that would throw some his way.

In a relatively brief manner, the man confesses to feeling exasperated over his wife’s physical appearance after giving birth to their child. Expressing his inherent love for her, the man goes on to detail his concern for her, while asking the public how he could ask her to go on a diet.

Image for illustration purposes only.
Image via Kampus Production/Pexels

Opening his post, the man begins by stating how it’s been two years since his wife gave birth to their child

Diving right into his frustrations surrounding her physique, the man mentions that his wife has gained a substantial amount of weight to the point of obesity, in his opinion.

“I understand that she gained weight because she was pregnant with my child, but it’s been two years — it can’t be that she can’t get skinny again. I love her, but things are not how they used to be. I’m too lazy to be intimate with her anymore,” he wrote.

While the confessor reaffirms his love for his wife, he maintains his stance that he just wants her to be healthy and watch her diet. However, he then poses a question that raises some eyebrows.

“What do I have to do to give her mental strength to start a diet? She has the interest to begin, but falls back on her chocolate ice cream the next day. It irks me,” he concludes.

Image for illustration purposes only.
Image via Andres Ayrton/Pexels

The post has since garnered plenty of attention on Twitter, with many people slamming the man for being superficial when it comes to his wife’s appearance

A large portion of the responses condemned the man for making such complains about his wife, after she gained weight from carrying his child.

An exchange between two users began with one person expressing how she hates ‘these’ kinds of men. “He loves to look at other females because his own expectations for his wife is so high,” she wrote.

In response, another user stated how men change in viewing their wives after bearing children. “When she’s flat and skinny, she’s the queen of his heart, the most beautiful woman in the world. But after she gains postpartum weight, she’s gross, and he can’t stand to look at her. She gave birth to your child — have some gratitude towards her.”

A couple of others were split on the matter. One user accused the man of only caring about his wife’s looks, not bothering to help her through the process. “You have to diet with her. Don’t have junk food in the house and don’t eat fattening food in front of her,” he suggested.

Another person, however, rebutted this claim, saying that the confessor stated that his wife is obese, and that all he wants is for her to be healthy.

A few users urged the man to be more supportive of his wife, suggesting things he could do. “Cook for her, hit the gym together if you have money, help her at home. If she’s tired or stressed, she’ll return to her old habits to relieve her stress. Lecturing her or whining won’t help,” said one person.

One more user provided an itinerary of ways he could help his wife, which included spending money on her, taking care of the child, doing the house work, and giving her time to go to the gym. “I guarantee you that by the time your wife is skinny, you’ll be tubby because of all the stress it takes to maintain one household.”

However, some of the most fruitful comments came from women who are mothers themselves

“It’s not easy to lose weight,” said one mother. “I’ve been through the process. Your mental strength must be great. You have to support her not only for vanity reasons, but because you want her to be healthy. Complaining about it to her isn’t going to do anything.”

Adding some advice, the woman mentioned how her husband stood by her and dieted with her, too. “He’d eat the same things I did, and even run on the treadmill with me. I felt like I wasn’t alone,” she said.

Another woman provided more insight for the man to consider, that could have contributed to her weight gain. “When women breastfeed, you’ll obviously gain weight because you’re hungry afterwards. If you want your wife to lose weight, hire a nanny to take care of the baby, and give [your wife] money to treat herself, to slowly take care of her body again.”

Another man in his 30s made a list for what his ideal girlfriend should be like, though he’s been single for quite some time:

Meanwhile, one woman is contemplating divorcing her husband due to his dirty lifestyle: