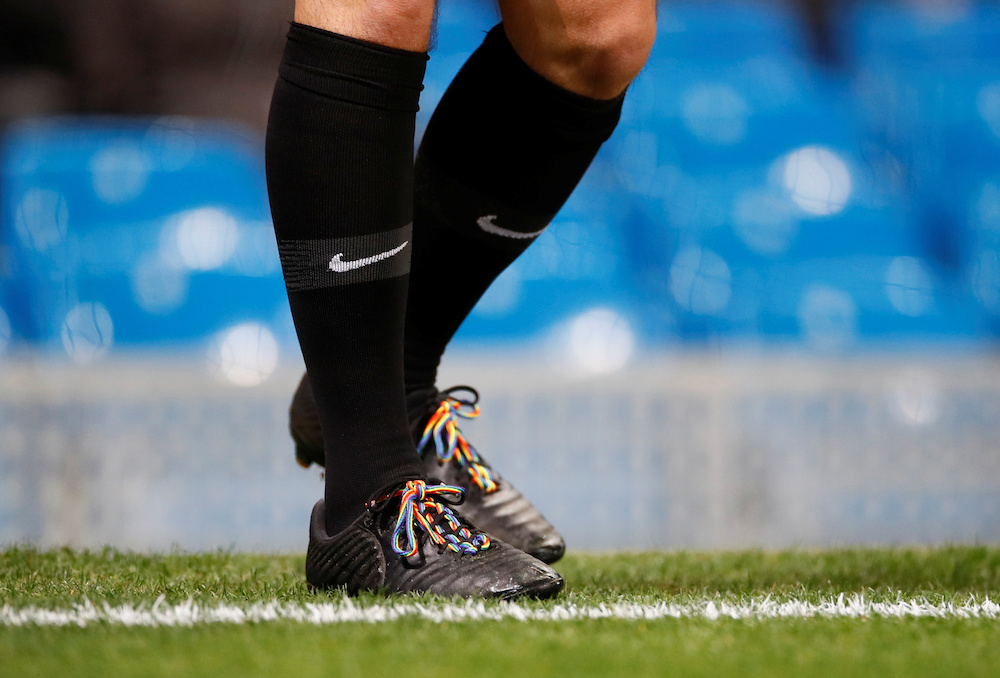 Premier League teams have worn rainbow laces for one weekend each season since 2013 as part of a campaign led by lesbian, gay, bisexual and transgender rights charity Stonewall. — Action Images pic via Reuters

LONDON, May 17 — Blackpool teenager Jake Daniels’ decision to come out as the first gay professional footballer in the UK men’s game in more than 30 years was heralded as a historic moment yesterday.

The 17-year-old forward made the announcement in a statement on the Championship club’s website.

“Off the pitch I’ve been hiding the real me and who I really am,” he said. “I’ve known my whole life that I’m gay, and I now feel that I’m ready to come out and be myself.

Former Norwich and Nottingham Forest striker Justin Fashanu came out publicly as gay in 1990, during his playing career.

A-League player Josh Cavallo, who plays for Adelaide United, announced he was gay in October.

Former Aston Villa and Germany midfielder Thomas Hitzlsperger came out after his career ended, while ex-Leeds defender Robbie Rogers revealed he was gay in 2013 after leaving Elland Road and before joining LA Galaxy.

“It’s a step into the unknown being one of the first footballers in this country to reveal my sexuality, but I’ve been inspired by Josh Cavallo, (non-league manager) Matt Morton and athletes from other sports, like (diver) Tom Daley, to have the courage and determination to drive change,” added Daniels.

Daniels, who recently made his first-team debut for the club, said he had confided in his team-mates in the youth team, who had supported him.

“I’ve hated lying my whole life and feeling the need to change to fit in,” he said. “I want to be a role model myself by doing this.

“There are people out there in the same space as me that may not feel comfortable revealing their sexuality. I just want to tell them that you don’t have to change who you are, or how you should be, just to fit in.”

“Thank you for your bravery Jake. It would have taken huge courage to come out and you will be an inspiration to many both on and off the pitch,” Johnson said.

“What he has just done takes incredible courage,” said Neville in his role as a pundit for Sky Sports. “I can’t imagine how difficult that has been.

“All I would say is it’s a day of great importance for Jake and his family, but also for English football. It will go down in history. It is a big moment for football.”

Premier League teams have worn rainbow laces for one weekend each season since 2013 as part of a campaign led by lesbian, gay, bisexual and transgender rights charity Stonewall.

“We are proud that Jake has felt able to share his truth with the world,” said Stonewall’s director of programmes Liz Ward,

“To come out publicly as the UK’s first openly gay professional footballer in nearly 30 years takes incredible courage, and we’re heartened by the solidarity and support he has received from Blackpool FC and his team-mates.” — AFP