Biden to press Xi on North Korea in G20 talks 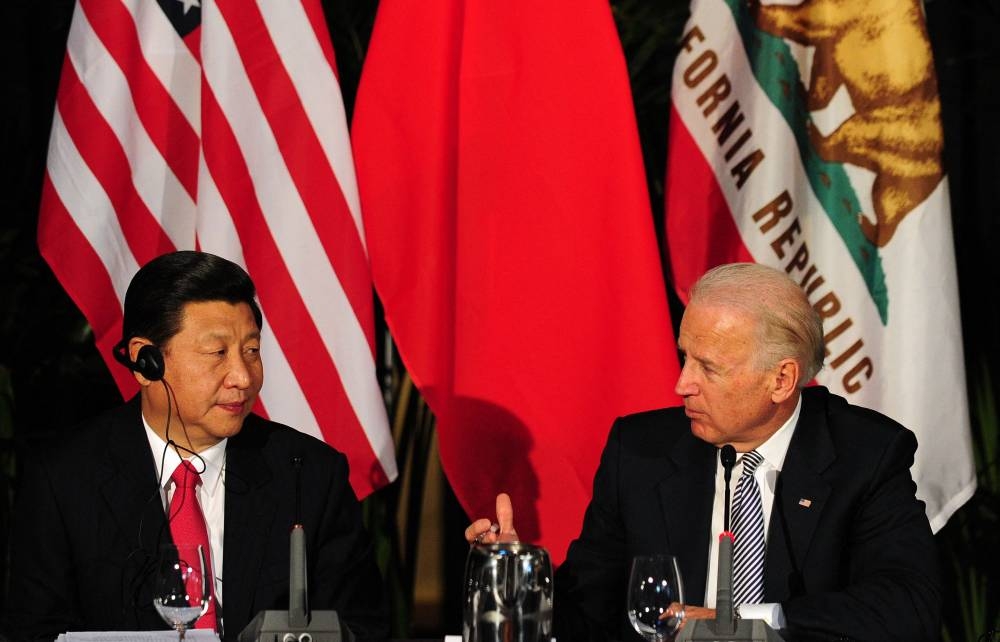 US President Joe Biden disembarks from Air Force One upon arrival in Cambodia’s at Phnom Penh International Airport on November 12, 2022, as he travels to attend the 2022 Association of Southeast Asian Nations (ASEAN) Summit. – AFP pic

PHNOM PENH, Nov 12 – US President Joe Biden landed in Asia on Saturday vowing to urge Chinese leader Xi Jinping to rein in North Korea when they hold their first face-to-face meeting at next week’s G20 summit.

Biden touched down in Phnom Penh for meetings with Southeast Asian leaders ahead of his encounter with his Chinese counterpart on Monday in Bali.

The meeting between the two superpowers comes after a record-breaking spate of missile tests by North Korea sent fears soaring that the reclusive state would soon conduct its seventh nuclear test.

In Monday’s meeting on the sidelines of the G20 summit, Biden will tell Xi that China – Pyongyang’s biggest ally – has “an interest in playing a constructive role in restraining North Korea’s worst tendencies”, US National Security Advisor Jake Sullivan told reporters.

Biden will also tell Xi that if North Korea’s missile and nuclear build-up “keeps going down this road, it will simply mean further enhanced American military and security presence in the region”.

Sullivan said Biden would not make demands on China but rather give Xi “his perspective”.

This is that “North Korea represents a threat not just to the United States, not just to (South Korea) and Japan but to peace and stability across the entire region.”

Whether China wants to increase pressure on North Korea is “of course up to them”, Sullivan said.

However, with North Korea rapidly ramping up its missile capacities, “the operational situation is more acute in the current moment”, Sullivan said.

Tokyo and Seoul have been increasingly alarmed by the North Korean testing blitz, which included an intercontinental ballistic missile.

Biden and Xi, the leaders of the world’s two biggest economies, have spoken by phone multiple times since Biden became president in January 2021.

But the Covid-19 pandemic and Xi’s subsequent aversion to foreign travel have prevented them from meeting in person.

This combination of pictures created on November 11, 2022 shows US President Joe Biden (left) addressing the Major Economies Forum on Energy and Climate from the South Court Auditorium of the Eisenhower Executive Office Building, next to the White House, in Washington, DC on June 17, 2022 and China’s President Xi Jinping (right) speaking after walking with members of the Chinese Communist Party’s new Politburo Standing Committee, the nation’s top decision-making body, to meet the media in the Great Hall of the People in Beijing on October 23, 2022. – AFP pic

The pair are not short of topics to discuss, with Washington and Beijing at loggerheads over issues ranging from trade to human rights in China’s Xinjiang region and the status of the self-ruled island of Taiwan.

UN chief Antonio Guterres has urged the two sides to work together, warning Friday of “a growing risk that the global economy will be divided into two parts, led by the two biggest economies – the United States and China”.

Before the G20, Biden will push the US’s commitment to Southeast Asia in meetings with leaders from the Association of Southeast Asian Nations (ASEAN), seeking to counter Beijing’s influence in the region.

China has been flexing its muscles – through trade, diplomacy and military clout – in recent years in a region it sees as its strategic backyard.

Biden flew into Phnom Penh with an agenda emphasising his administration’s policy of “elevating” the US presence in the region as a guarantor of stability, Sullivan said.

Biden will argue for “the need for freedom of navigation for lawful, unimpeded commerce, and for ensuring that the United States is playing a constructive role in maintaining peace and stability in the region”.

In this file photo taken on February 17, 2012 US Vice President Joe Biden (right) speaks as his visiting Chinese counterpart Xi Jingping (left) looks on during a meeting of governors in Los Angeles, in California. – AFP pic

Biden and Xi both go into the G20 buoyed by recent domestic political success: Biden’s party having earned surprisingly strong midterm results and Xi having secured a landmark third term as China’s leader.

At last month’s Communist Party Congress, where he was anointed as chief again, Xi warned of a challenging geopolitical climate without mentioning the United States by name, as he wove a narrative of China’s “inevitable” triumph over adversity.

The G20 summit will be the latest step in a diplomatic re-emergence for Xi after the pandemic – it comes less than a fortnight after he hosted German Chancellor Olaf Scholz in Beijing.

As well as Biden, Xi will also meet French President Emmanuel Macron before heading to Bangkok later in the week for the APEC summit.

Notably absent from the summit will be Russian President Vladimir Putin, who has been shunned by the West over his invasion of Ukraine, and who is instead sending Foreign Minister Sergei Lavrov.

Lavrov will press Moscow’s view that the United States is “destabilising” the Asia-Pacific region with a confrontational approach, the Russian TASS news agency reported.

Ukrainian President Volodymyr Zelensky is expected to attend the G20 virtually, after his request to address the ASEAN gathering was turned down. – AFP