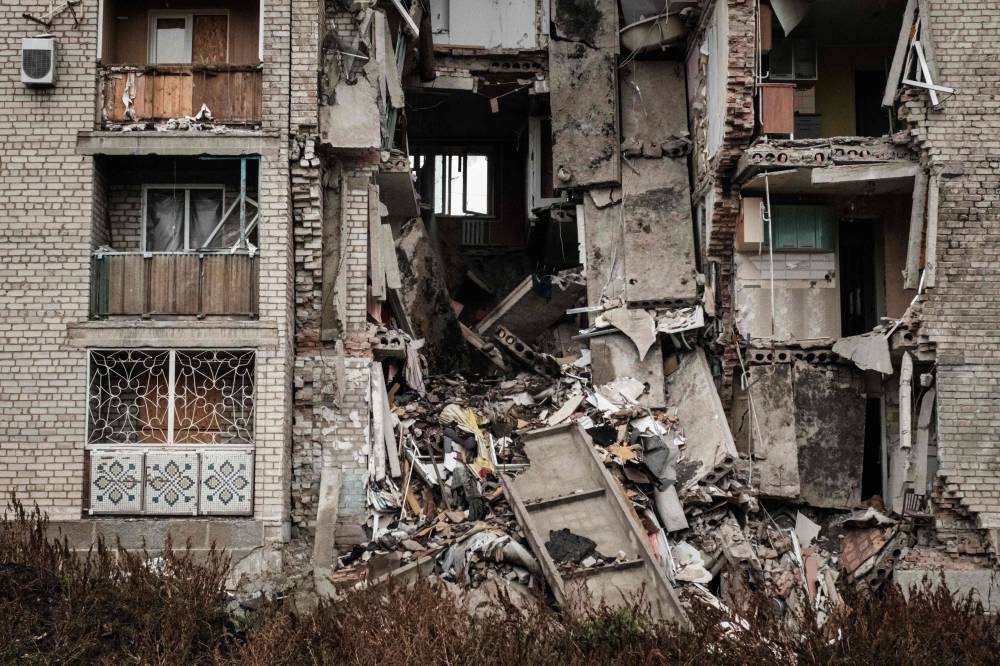 A destroyed apartment remains in the frontline town of Bakhmut in the Donetsk region on October 11, 2022, amid the Russian invasion of Ukraine. – AFP pic

The president spoke out in a rare televised interview as his administration looks for what he has described as an “off-ramp” for Putin to deescalate his invasion of Ukraine before he resorts to weapons of mass destruction.

“I think he is a rational actor who has miscalculated significantly,” Biden told CNN after Moscow’s shelling of civilian targets across its neighbour marked an escalation in the seven-month conflict.

Biden warned last week that the world risks “Armageddon” in unusually direct remarks about the dangers from Putin’s thinly veiled threats to use nuclear weapons to assist Russia’s faltering attempt to take over swaths of Ukraine.

Putin’s state of mind has been the subject of much debate after the Russian president suffered a series of recent military set-backs in the invasion, which he launched in February.

In remarks released by CNN ahead of its broadcast of the interview later Tuesday, Biden said that while he believed Putin was rational, he had underestimated the ferocity of Ukrainian defiance.

Kyiv’s forces have in recent weeks been pushing back against Russian soldiers across the front lines in the south and in the east.

But the Ukrainian defence ministry said Monday that Russia had retaliated with a massive bombardment of its neighbour, hitting the Ukrainian capital Kyiv for the first time in months, as well as other cities across the country.

Biden spoke to CNN hours after meeting virtually with members of the Group of 7 industrialized nations, who heard from Zelensky on the need for intensified efforts to “create an air shield for Ukraine” amid the barrage of Russian cruise missile and drone attacks.

Zelensky told the G7 “millions of people would be grateful” for help fending off attacks from the sky, and he warned Russia “still has room for further escalation.”

Washington pledged after Monday’s bloody salvos that it would up shipments of air defences to Ukraine, while Germany promised delivery “in the coming days” of the first Iris-T missile shield reportedly capable of protecting a city.

Meanwhile, the United States was leading an all-out offensive to rally as many countries as possible to adopt a resolution at the UN condemning Moscow’s annexation of Ukrainian regions.

“We believe the time has long passed for neutrality. There is no such thing as neutrality in a situation like this,” said State Department spokesman Ned Price.

UN countries are debating a resolution introduced to the General Assembly by Ukraine, which the West hopes will demonstrate the isolation of Putin’s Russia on the international stage, with a vote likely on Wednesday or Thursday.

Biden frequently takes questions from the media, but he has held few press conferences or one-to-one televised interviews.

He has been more visible recently as he takes to the road to talk up Democratic legislative achievements and slam “MAGA Republicans” – followers of former president Donald Trump’s “Make America Great Again” agenda – in the final weeks of the midterm election campaign.

He also sat with CBS in September, making headlines for declaring the Covid-19 pandemic over and confirming US commitment to defending Taiwan from a Chinese assault. – AFP